I thought this went out of style. Looks like we are traveling back to the late 90’s. This has even caught the attention of The Drudge Report. Warning: Some images may be too graphic for some. 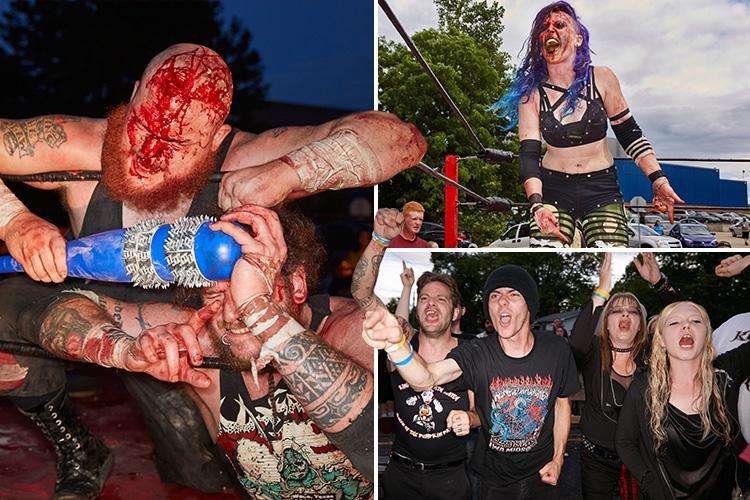 Hardcore wrestlers beat each other bloody in ultra-violent 'death matches'

IT’S been dubbed the bloodiest sport in the world – where men and women beat each other to a pulp with glass lighting tubes, fan-made barbed-wire bats and other deadly weapons. This is …

I’ve gotten a little back into this scene this year but that’s mostly because of Jimmy Havoc and him bringing it over to the UK in full force and winning the tournament of death this year. Clint Margera and Drew Parker have also added to the scene over here and the tag match at Fight Club Pro (Havoc & Margera vs. Parker & Ricky Shane Pane) just looked like an event you needed to see.

If you’ve seen bad deathmatches, then you will hate deathmatches. However, when you see a good one, you will love hem.

With that in mind, I highly recommend the Drew Parker & Ricky Shane Page vs Jimmy Havoc & Clint Margera deathmatch from last years’s Fight Club Pro: Project Mayhem. An absolute epic and spectacle from beginning to end.

I remember when Masawa won the CZW title and spoke about how he’d bring wrestling and prestige back. It was interesting.

That’s the thing with these deathmatch wrestlers, many are just generally good wrestlers who choose to do that style. Guys like the late JC Bailey, Drake Younger, Danny Havoc etc. were actually very solid in the ring and added story to the matches. But there are also those horrendous ones who just rely on hitting people with shit.

Tried to watch a couple “good” death matches that were recommended to me. Couldn’t make it through them. Just not my thing.

Just like any style of wrestling, whether it’s puro or lucha or what-have-you, some people aren’t going to enjoy it. Deathmatch wrestling also suffers from a serious case of “barely-trained-fat-dudes-bleeding-itis”, it’s definitely a little tough to find the good stuff - and frankly I don’t even love the good stuff all the time. Sometimes though, it’s nice to be able to see a little consensual barbarism - and just as I completely understand anyone who isn’t into it, I think it’s foolish to criticise people for taking part too.

I disagree vociferously on it being foolish to criticize some that is easy to try and stupid to do.

That’s like saying it’s foolish to tell kids not to challenge their friends to eat tide pods.

That’s like saying it’s foolish to tell kids not to challenge their friends to eat tide pods.

If you’re willing to let another person cut you, burn you, drop you from a rickety contraption that is 15 feet high…are you really an “informed adult”?

Especially if it’s for a measly wage?

are you really an “informed adult”?

in·formed
inˈfôrmd/Submit
adjective
having or showing knowledge of a particular subject or situation.
“an informed readership”

a·dult
əˈdəlt,ˈadˌəlt/Submit
noun
1.
a person who is fully grown or developed.
“children should be accompanied by an adult”

is someone who voluntarily competes in a deathmatch, presumably having been familiar with deathmatches, likely not having an economic need to compete in deathmatches (like you say, most deathmatch wrestling probably doesn’t pay a lot) an informed adult?

like people have agency dude, let people do what they choose to do

Sweet, instead of trying to contribute you’re going to compare people who like a thing you don’t like to people with genuine disabilities who couldn’t give informed consent, aka the whole reason I brought it up in the first place. Done w. this.

This is what I’m talking about. People watch or see clips of shitty deathmatches and they hate it. You see two obese dudes walking around stabbing each other, then two untrained Johnny Kickpads take turns doing contrived bumps through sharp stuff. That’s shit, I get it. But it’s not a good example of a deathmatch.

Likewise, if I had never seen WWE-style matches, and I only saw modern Big Show, Big Cass and Kane matches, I wouldn’t think all North American wrestling is slow, cumbersome shit like that. But, weirdly enough, that rule doesn’t apply to deathmatches.

But, all the above are valid wrestling styles and excellent in their own right when performed by people who actually understand the whys, where’s, when’s and how’s. So to completely dismiss an entire genre of wrestling because all you’ve seen is random IWA/CZW stuff is just ignorance.

Do the excellent death matches include people falling 15 feet through light bulbs and a lot of blood or just the bad ones?

Depends on the context. Do excellent WWE matches take place in abandoned houses or just the bad ones?

No abandoned house match in WWR was ever “excellent”

That’s the point. If all I had ever seen of WWE was Bray Wyatt, Big Show and Dolph Ziggler matches, I would believe that style was schlocky and cumbersome.

Not really a valid point because not EVERY WWE match takes place in an abandoned house or include projections of worms and maggots in the ring.

That is what I am asking you, do the “excellent” death matches still include large falls, tube shots, and tons of blood?

Some do, some don’t. Blood is a given, due to the nature of the style, not necessarily ‘tons’. Same thing applies to tubes and ‘large falls’.

I get it. Everyone has seen photos from shit-bait articles like the one in the OP, and everyone has seen GIFs and MV’s on YouTube, but these tend to be made of ‘shock-value’ moments and, most of all, they lack context. What you see as, “Guy just did a move off something tall through glass how stupid no talent” is actually the end of a 25-minute blow-off match to a heated fued, that teased and built up all the spots perfectly like any other great wrestling match.