I’m proud to be a Patreon supporter of both POST Wrestling and Sunday Night’s Main Event because I’m been a fan of all four of them for close to a decade.

For the past couple of weeks now, Jason began adding more weekly content with “All Elite Weekly w/ Mouth” and including his Newstalk 1010 show, Sunday Morning Trivia which is great.

I want to ask former LAW listeners, what do you guys think of Jason and Mouth’s TSN Radio show for the past year and what would like to see improve on? 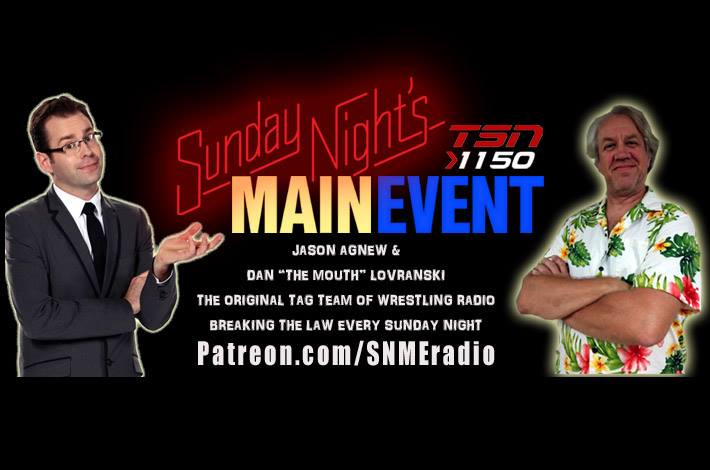 I think that despite the obvious connection and crossover of listenership with POST Wrestling it’s pretty odd to make a thread like this here about what’s essentially a rival podcast. Especially as you probably know full well they might not be on the best of terms with each other.

I’ve never listened to it. Between Post Wrestling and all of Conrad Thompson’s shows, I don’t have much time left in my week for podcasts.

Outdated concept. I finally jumped onto the patreon, only because I like hearing Meltzer, but to make people pay, to hear the full show, when it is free the night before and it is a show about week old news is ridiculous.

I’m glad they finally got a couple extra patreon bonus shows, besides that stupid trivia show that I have no interest in.

It’s was hard for me to pick who to support on patreon as i don’t have a lot of money and i love both of them, in the end i cancel my patreon support to post wrestling and gave my money to SNME. This was mostly because i love the more entertainment take on pro wrestling that agnew and mouth have. Plus i love the fact that for a litte less then i was charge for post wrestling, i got a lot of entertaining podcast that’s not necessarily wrestling related. I love jason’s trivia show and mouth’s music podcast, so just for that and the main show, it worth the 5,50$ canadian that i pay every month.

Whatever, I’m still proud to support both ventures. Just wanna hear other thoughts.

I listed to all the old LAW shows, but never particularly for Jason Agnew. I listened to the Sunday night show for John, Mouth and Meltzer. The review shows for John and Wai who I really enjoyed listening too. And even upNXT I listened to for Braden and bartender Dave.

So I really don’t have much interest in SNME.

It’s ok, but I just don’t think their overall content is good enough to make me want to become a patron. And that dude who was on with Jason on Sunday was terrible.

Mouth and Jason are still good, but crap like trivia and random hosts that sound like they’ve been watching wrestling for three years doesn’t interest me.

Mark Andrada? Yeah, you either like him or you dont? Its iffy.

Just low-energy and it felt like he had all the same opinions as Jason.

I only listen when Mouth is on for the first hour. Usually when there’s PPV reviews. I think Agnew by himself is kind of flat and the self-glossed “Angry Agnew” is a little cringey.

No issue at all with him doing a Patreon though. Get paid.

I only ever listened to hear Meltzer’s segment.Not paying for 5 minutes of Dave.

I agree that it is kind of an outdated format. When I have listened I feel like it is just a retread of the “LAW”. I think most if not all of the Live Audio Wrestling fans went to Post Wrestling. The years of “Review a…shows” built a big audience I’m proud to be a part of. Best of luck to Jay and Dan, though I hope John, Wai, Jason and Mouth will do a “worst of” show or something like that together eventually. On occasion I do miss listening to “The Law” on Sunday nights or the podcast version Monday morning. I feel like the Post boys catch up though on all the weekend’s news on Monday night. Oh yeah, they cover the PPV’s too so not much to miss.

I listened to a bit of his show earlier this week. He’s the same.

I think I gave it a shot back after the LAW ended… And that “shot” was basically it.

Agnew may be a fine radio host - but as a wrestling journalist / commentator, he’s always been awful. His speculation / talking points always seemed to be the absolute worst perspectives that represented the stereotypes of internet fans.

I’ll never forget the LAW episode right after Mania 30. In my mind, the second best Mania ever (after 17) and definitely within anybody’s top 5. The Agnew and Mouth got on the air and claimed that Taker’s streak ending to Brock was deliberately done to kill the audience, and undercut Bryan’s win that night.

I can’t imagine much has changed about his perspective. Maybe I’m wrong. But I always felt what he did is not what John and Wai do, and it’s hard to compare on that basis.

I’ll always say, this is now such an outdated show. I’m a patron, pretty much because I want to hear Meltzer and I just need something to listen to at work. It’s all news that everyone else has already gone over during the week. The best parts of the shows are Mouth and Mark Andrada who has really grown on me. Bartender Dave has become pretty much unbearable. I used to like him with Braden, but he’s gone so far downhill.

I think it’s a bit in poor taste knowing this is a rival podcast and we there might be issues between the hosts. If you want to hear meltzer then he has his own podcast and I know him and John and Wai are all friendly.

Can’t speak to SNME directly since I’ve not listened in years. But if you’re a wrestling news junkie like we all presumably are on this forum, a weekly show is rarely going to cover any new ground when there are a ton of great daily sites/podcasts out there.

I loved the LAW so was excited for it to come back. But I wasn’t prepared to pay for the 5 minutes of Meltzer. So getting it days later was just pointless.
Pleased its still going though. Good for them