Could anyone explain what happened and what was the point of the entire segment?

It was shot like an eighth grade drama class and the acting was directly on par. I hope Reigns is better in that movie he’s in because he was pathetic, but so was everyone else in it.

Why was he crushed by the structure and then seemingly fine two seconds later? Why was Kayla interviewing him with 2 minutes left in the show? What were the security guards/medical people saying after he just got up and recovered?

The entire scene was just sad. For all the money WWE has to produce something that terrible is pathetic.

I thought it was alright. I like cliffhangers. I very much prefer this type of ending to a show rather than the usual same old stuff. I like the idea behind it more than the execution itself.

Someone is trying to kill him ?

They tried to kill him by pushing a rigging structure on him?

There was no drama, no struggle - nothing happened. He had that pushed on him and then dusted himself off and declined medical attention. The situation was resolved in 15 seconds. Did nothing to make anyone care.

That and the “scene” featured like five camera cuts in six seconds. Terrible

Sure, it wasn’t the best thing they’ve ever done but I give them credit for trying something new. Was it really that bad? It was an innovative way to end a show, and cliffhangers like this might encourage people to stick around for the entirety of the show.

Hopefully this has a pay off and not dropped like this one.

And Roman gets his first celebity match against Macaulay Culkin.

Well, glad that mystery was solved with such a satisfying and worthwhile conclusion… 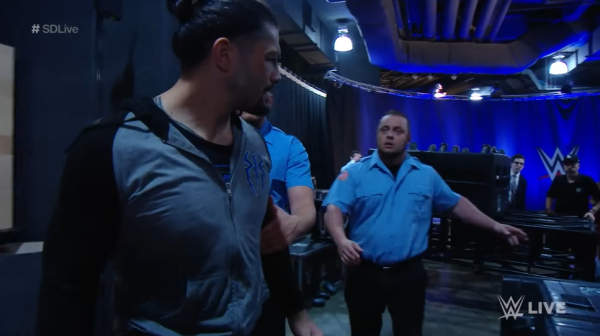 Wondering who attacked Roman Reigns at the end of this week’s Smackdown? Prepare to be underwhelmed!

I mean if that is the case I’m glad he is unhurt, at the same time, turn that shit into an angle.

Maybe the forklift driver can be wearing a mask and when he’s unmasked it’s Cedric Alexander.

If the attempted attack actually had some repercussions, like an injury or blood; it would have worked. Instead, it’s the equivalent of slipping on a wet floor or something. How can we, as an audience, take it as a big deal when
It was just a minor inconvenience? I mean, these guys get punched in the face for a living; and I’m supposed to buy that some crap falling over (but not hurting you in anyway) means something???

I rate this to be in the same level as Rikishi running over Austin or that “incident” of a structure collapsing onto Mr. McMahon when he is giving people a monetary prize back, I think, in 2009.

Well, if it did, don’t you think that the lobby groups would to hang WWE by its long neck?

This was more of a way to create the notion that someone wants to seriously injure Reigns. Him actually being injured or not doesn’t invalidate the attempt. If someone tried to shoot you but the bullet hit the ground half a metre away from you, the reaction wouldn’t be “carry on, nothing happened”.

They didn’t pull it off that well as the acting was pretty tragic but the idea of someone trying to seriously injure him but not succeeding this time isn’t a bad idea. Another attempt should be made next week resulting in another fail. Then have it be a successful attempt at SummerSlam before whatever match they’ve scheduled for Reigns with the match then being cancelled. Reigns can be kept off for a couple of months. Reigns then comes back and eventually they find out who it is.

The idea made sense. The execution was lacking. It would have been better used as commercial break, not a weeklong cliffhanger. It was the equivalent of being locked in the bathroom when all was said and done.

I take it all back, this storyline is so bad it’s good. From the acting to the social media updates to none of it making sense - this is Wrestlecrap at its finest.

Rowan did it for da Bry…

Car should’ve been a Prius…dead giveaway

I just love all the twists, turns involved in a main event WWE storyline. So enthralling and engaging. The big reveal of Rowan and then his reaction, standing in the ring with his arms crossed, made everything worth it.