The inaugural All Elite Wrestling thread

Goldberg at least looks pretty similar to the way he did in his prime. They’re going to need some names from the past or nostalgia to start off. No problems with them bringing him in

Kevin kelly as always been a pretty smart guy in the wrestling business so if somebody knew what he was talking about is probably him.

As far as Goldberg is concern, i get that you need big name stars to get the word out right away. But the problem with Goldberg i feel like it’s going to be a been there done that type of situation. IT’s kinda like the ric flair situation in TNA. Flair had gotten the perfect send off in WWE and then showed up in TNA and continue to wrestled and fans pretty much shit on the whole thing because they realized what this was and it was Ric doing it for the money. Goldberg is in the same situation now, he got the perfect send off in WWE. His story was perfectly told and you don’t really need to add anything to it. If he shows up in another company, even if it’s just to spear and jackhammer cody, fans will see through it instantly and it won’t work. So i feel right now the only guy that’s still has some star power and could help them out tremendously is CM Punk. The problem with this is that it looks like he’s pretty much done with wrestling right now and it will take a lot to bring him back in.

This is just me fantasy booking her but now that Jason David Frank (the green/white power rangers) as started to wrestled and their been this worked grudge going between punk and him for what seems like forever. Why not make that match in AEW. This would get a lot of publicity for the company and the buzz on the internet would be enormous. Plus we know that JDF will plug the living hell out of that matcch since he’s pretty much the best self promoter in the business today.

Get outta here with that shit. How are you gonna shit on Goldberg coming in, because he had the “perfect send off” even though he left things open for a return and people were immediately talking about it right after and then wanna book CM Punk, who if he comes back, will instantly be one of, if not their biggest star…against a fucking power ranger?

That is worse than anything Goldberg can possibly come in and do.

Very interested in Tuesday’s rally. I doubt Goldberg will be coming in.

Punk vs JDF will attract the casual fans which they desperately need if they want to get more fans outside the hardcore bases they already have. Goldberg won’t because to the casual fans, they already seen the big return of goldberg to wrestling so anything he would do will seem inferior to what WWE did. Nothing against goldberg as he’s one of my all time favorite but the fact that he did this big return storyline in WWE and it was not that long ago will take the interest of the casual fan down a peg in my opinion.

If they want to really make a impact, they need a major star that hasn’t been in wrestling or tv for a very long time and let’s face it Punk is the only option right now. You need your special attraction and Punk is that attraction, he hasn’T been in a wrestling ring since he left WWE so casual fans that where fans of him will tune in to see what he’s been up to. If you put him in a feud with JDF, this bring the mainstream media on board because like it or not, JDF is still a big deal in the entertainment industry. And you start a program with these 2. The fact that in a weird way, these 2 do respect each other and will take a serious approach to the match will make it a even bigger event when they finally do face off. You can do so much marketing around that match is not even funny since they been at each others throat for years now.

Anyway, that’s my thought on this. Why give the casual fans something that WWE already gave them when you could go ahead and give them something that’S been in the making for years now. If stephen amell can wrestle and fans don’t shit on it why would it be different for JDF.

Stephen Amell didnt wrestle one of the biggest stars in the business. CM Punk would instantly be one of, if not their top guy in AEW. JDF wrestling him, would be no different than David Arquette in WCW, except that even Arquette was a way bigger star than JDF. I’m not sure what universe you live in, that you think a power ranger is a big deal, but there are no power rangers in 2019 that are “big deals in the entertainment industry.” Just because a couple comic book websites or wrestling websites mention the guy every couple months…no one is talking about him outside of that.

you have clearly not follow the entertainment scene if you think that JDF isn’t a big deal. Power rangers is one of the biggest franchise in TV today, JDF is the face of the 25 years franchise and he get cover by entertainment website everytime something happens with him. Just go and go read some entertainment website, everytime he called out Punk over the last 5 years plus, every entertainment websites has covered it. Everytime he doing a cameo on a power rangers episode, it’s been covered. Everytime he has a new project, it’s been covered. He’s one of the biggest celebrity on youtube, so let’s face it he’s a bigger deal that you’ve give him credit for. Plus let’s face it, is millions of fans around the world will tune in or at less try to find this match if it happened because that’s a fight they’ve been waiting for years now. So that’s new eyes on the company that they wouldn’t have without him.

100k subscribers on YouTube & Twitter…Man, I was so wrong. What a massive star he is in the entertainment business. Such a huge deal.

In fairness, Punk vs. JDF feels way more appropriate on an All In card than Hangman Page vs. Goldberg.

Also in fairness, that match would be carried by interest in Punk, not JDF.

that’s 100k fans that will tune in to AEW to see this fight plus you have others that aren’t subscribers that will follow this match. The last time this fight was tease, it was covered by all the big entertainment programs on tv and all the big publications like variety and entertainment weekly. You could use the first show up on a episode of AEW and this lead to a match at double or nothing in the mean time you have the entertainment media plug the match and that’S free publicity for a startup company that need that mainstream media publicity to get rolling. but that’s just a idea i’m throwing out there. If you got a better idea, i really would love to read it.

Yea, because that is how it works. Just because you have subscribers, that means they are going to tune into whatever you do. With that logic, Goldberg has 5X the amount of twitter followers, AEW should sweep him up then, because that is already 500K viewers, plus the millions more that arent subscribers.

John Cena has 11 million twitter followers, Smackdown must have got a killer rating on Tuesday with all of them tuning in to see him.

I’m shocked Jason David Frank has about half the interest as David Arquette. 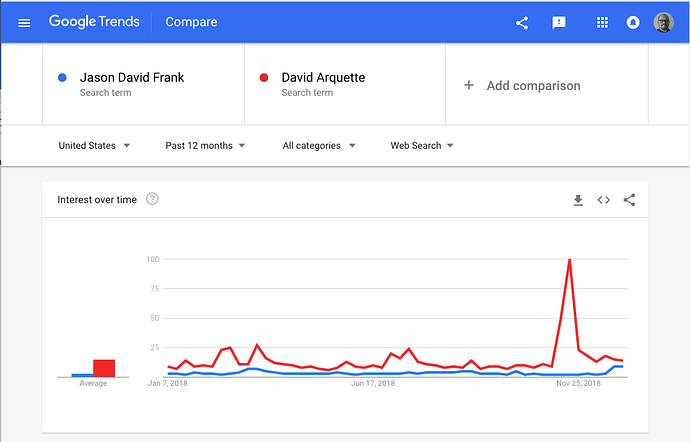 I think you are in a bit of a JDF bubble @psykohurricane.

Holy shit…what a massive superstar that JDF is. All those entertainment sites talking about him.

I even find this surprising… 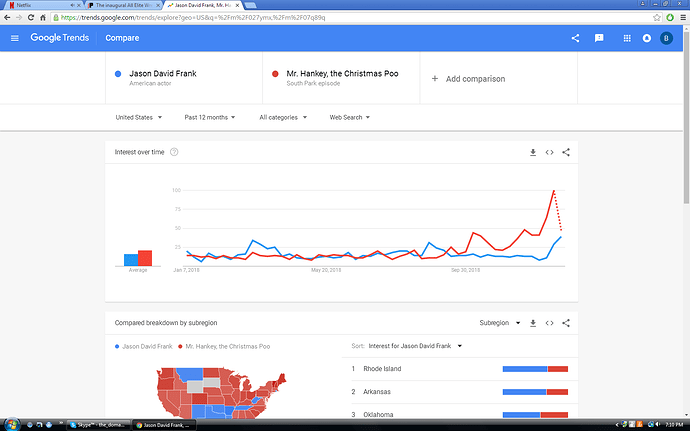 Anyway, if you guys have a better idea, please share it with me instead of dumping on mine. This was just a idea I had to bring new eyeballs on the company.

So please, do share your idea’s with me if you are such expert.

Not dumping on your idea, it’s fine. Just trying to explain to you that “JDF” isn’t a “massive” star.

If AEW just has good wrestlers wrestling. They’ll be fine. No need for Carrot Top run-ins yet.

I get that, like I mention before, AEW really need to focus on establishing their stars before going on and bringing in celebrities and legends. As far as the JDF thing, my take wasn’t really about the guy himself as I know how much of a following he gets. It’s more about the match itself. Everytime the match was tease over the years either when punk was in wwe or UFC, every entertainment website and media covered it. That’s why I suggested it in the first place. At some point, when they will have gotten a solid fan base in about a year and will want to grow their audience, this match will bring in New fans because the mainstream media will cover it.

So I watched All In again recently.

that Adam Page vs. Joey Janella match is so hot…followed by an incredible angle that was built in BTE world for months.

I want more of that. Give me more of that. (okay, maybe that sounds weird)…but that’s all you need to be entertaining. Hard working, give it their all guys who are willing to tell stories and trust the creative process.

Eyeballs will come. It’s not that hard. I don’t want to see them overthink what is needed to draw fans.

As fans, we need to be patient and we need to appreciate that and not jump all over them if it takes a bit to get their feet under them.

EDIT: I realized I used the worst possible angle as far as saying that will draw eyeballs…but the point is, BTE has paid off so many stories and created so many matches. Expand that world beyond just The Elite and SCU and let guy interact and build up to matches in new creative ways.
We got Kenny vs. Cody, The Bucks vs Golden Lovers, Hangman vs the Joey’s, Daniels and Amell even built a decent enough feud that made their match intriguing.
If you bring more and more guys into the fold with that kind of story telling, you can really create some good feuds and matches people want to see. The way they got to this point should not be lost.

If someone gets CM Punk back in the ring and books him against a Power Ranger, they deserve bankruptcy.