Well…in 24 hours we’ll all be buzzing about Wrestle Kingdom and probably getting ready to hear what is in my opinion the best big match entrance music today (Go Ace). Yes, I’m pulling for Omega but I do love Big Match Tanahashi entrance.

If I can borrow from @Pickles0303 - here’s a rundown of matches for predictions if people would like.

And check back in LIVE for the unofficial POST Wrestling hangout while the event takes place! *Spoilers will be permitted in this thread as it’s a LIVE discussion.

*Guerrillas of Destiny vs. EVIL & Sanada vs. The Young Bucks for the IWGP tag titles - GoD

*Kota Ibushi vs. Will Ospreay for the NEVER Openweight title - Osprey in what will be an instant classic

I can’t wait. Wish I was on the west coast to watch this.

I hope Tana wins the title tonight because Kenny Omega’s reign has been very disappointing, not have that huge single’s run.

I’m so fucking hyped for Ospreay/Ibushi. I cant watch live, but I’m glad I can wake up and that match will be first. I’m listening to both of their themes before I go to sleep.

California here. Ready to give my best go.

Pietr looks as good as ever… anyway, 6-man contender match underway. Lots of stars that would have been on any other main show.

7am here Cambridge, England & feel like a kid on Christmas morning who knows he’s got a buzzlight year under the tree. haha. Anyone like me who took the day off from work for this show? & Who in the states got up at 2 in the morning like john & wai have??

Suzuki will always be my guy but he’s been jobbed and moved further down the card, pretty soon he’ll be teaming with Tiger mask or Ren Narita

Anybody else having issues with NJPW World yet? 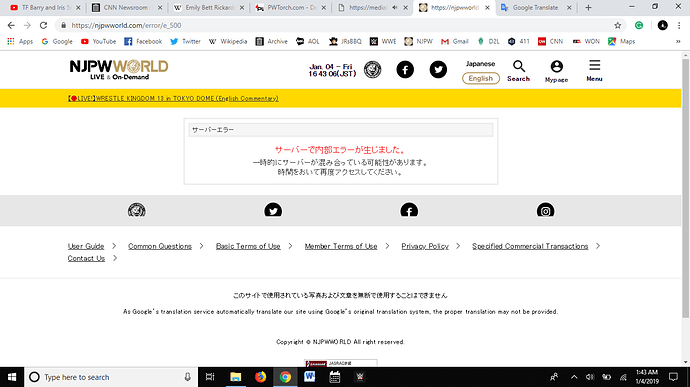 Anybody else having issues with NJPW World yet?

Did you try a different browser? I know I have to use Opera and not Chrome.

Did that with me even though I’m signed up used my Facebook i.D and it worked.

The gauntlet was a good showcase for the Yano/Makabe reunion, sad that no Liger

morning all from jolly old england

2 nights in the Dome next year?!
Kicking off the G1 in Dallas
Going to London

Some good surprises in that lineup for next year

My god, their announcements have already elevated this show

Honestly think this is the best spot for Osprey Ibushi!
I’m so hyped and it’s 3 am

And really this needs to be very far away from the other main events.

Osprey yelling with excitement on his entrance was great, genuine!