Love the New Japan product but some things are need to be said. Interesting column. 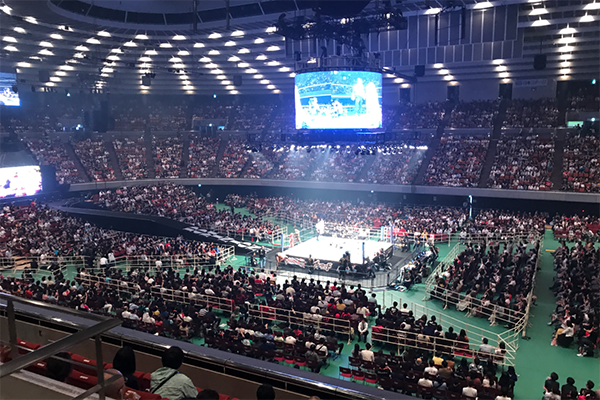 In recent years as fan interest has risen in New Japan Pro Wrestling outside of Japan, fans from other countries have increasingly wanted to attend New Japan live shows. NJPW has sold out big shows [...]

I read this and have a few thoughts. More on this when I have time to write them out coherently.

In short - the ticket industry is a disaster. So while I get the premise, I don’t agree NJPW is doing something so bad. Actually, I applaud them for trying to protect their products for who they consider its core fan.

Replace “NJPW” with “WWE” and then replace “Japanese” with “American”. Do you think the reaction would be as insignificant?

People get bent out of shape when WWE don’t allow fans to promote a rival company on their show so the obvious answer is “no”. WWE would have a tsunami of negative press for doing something like this.

Okay so some thoughts:

I understand the on-the-surface look of this. A Japanese company imploring nationalist tactics to benefit and provide preference to their country’s people. However, calling it outright discrimination feels like an overstatement by individuals impacted who don’t like it.

Let’s look at real discrimination: in Saudi Arabia there are outright bans on certain groups of people and activities. If NJPW was preventing foreigners from attending shows outright - fine, discrimination. That’s not happening.

I have noted here I’m a huge Springsteen fan. Attended 60 shows. Have been lucky enough to learn the ticket game and attended a lot of shows in great seats. Those seats often times are held back until day-of to make sure friends and family can claim tickets if they want to go. When they know how many are left over they release them to the common fan. I would never think to call that discrimination against fans. So you want to say the difference is this is based on nationality or address.

Okay, could I move to Japan or buy an apt in Japan and join the fan club? Sounds like yes. They haven’t discriminated me from attending they’ve simply made it so their fans in their country have the best chance at good seats. I actually wish all artists did that. Because the alternative is a secondary market where prices are jacked up and the fan loses out.

I can’t claim to know what secondary markets look like in Japan but I can say this. If I was interested in trying to make a buck off scalping I’d buy great WK seats and plan to sell them with no intention of going as I live in America. I won’t accuse a company of discriminating against me for simply preventing that practice. It’s the global world we live in and if they are confident they can sell tickets to local fans then they should. It also sounds as if they don’t want to make the product or venue overrun with foreigners and as an outside observers, that matters and is a branding tactic. For them, to allow foreigners to buy up all the best tickets it may turn off the local fan and make the fan base their feel company is not for them anymore. That has a business impact throughout the year that is probably been evaluated and calculated.

Add all that up and I simply can’t agree that this is discrimination. It’s preferential treatment but it’s on par with a lot of other ticketing practices that take place. If we accuse them of such because this feels nationalistic, that’s just our other side of the world opinion.

One particular selection from the piece:

*”This goes beyond simple discrimination. New Japan actively defrauded its own customers. They took those customers’ money explicitly for the right to enter their ticket lotteries and then denied them all precisely what they had paid for”

Fans paid for the Right to purchase tickets and while they could, they just couldn’t purchase certain tickets. When he says they explicitly took money from fans and denied them what they paid for - I’d love to see promotional material for the fan club to buy tickets and what tickets they guarantee will be available. This isn’t outright discrimination.

To knowingly accept those fans’ money while already having a hollow excuse for not providing them what they are providing that money in return for is a completely different level of misconduct. And it’s directed at the promotion’s most loyal and passionate fans.

When some event promoters sold 10s of thousands of dollars worth of promises and then couldn’t deliver - that was a completely different level of misconduct. See, Frye Fest.

The entire article makes this sound like it’s on par with Saudi discrimination practices and Fyre Fest levels of fraud.

NJPW is not faultless here. I’m guessing they misled in advertising material for the club. But curious if they did so by omission or overtly (not saying anything vs including a guarantee). I’d love to know the outrage if they had tiers of membership and only a higher tier was available for locals. Does that mean you were discriminated from paying more for a higher tier and better access?

It’s just weird to watch fans try to tear down a company they claimingly are it’s biggest fans. And it’s silly to see it done with such disregard for actual crimes, insensitivities and misconduct.