What’s your current faves? I like Flash, Super girl, Gotham, Daily Show, Bill Maher and the Goldbergs to round it out.

I used to be into Walking dead until this boring Negan storyline. I don’t care if they strayed from the comics. …I care that it’s just a pissing contest between two guys who are terrible leaders.

anyways…what you watching? Hell throw in Netflix or any streaming platform shows if you want.

Big fan of the DC/CW shows, although I’m becoming less of an Arrow fan as time goes on and that’s always been my least favourite anyway. I’ll also watched pretty much anything MCU related; SHIELD, Runaways, the Netflix shows, I even watched Inhumans for what it was.

Brooklyn Nine-Nine is my jam and if Michael Schur’s name is in the creative team then I’ll likely love it. Black-ish and Grow-ish are killing it right now. Fresh Off the Boat is great too; I adore Constance Wu.

Basically though, I watch way too much TV.

I feel like Arrow is slowly winding down…I couldn’t get into the show after the on again off again engagement.

I like Arrow when they are involved in crossover episodes, kind of like the Hulk in the MCU. 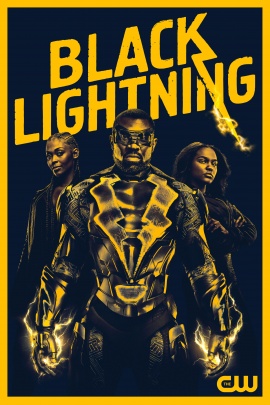 I think I need to start watching Black Lightning. I mess with iZombie too. Black Mirror is amazing. Red Oaks on Amazon I really dig too.

I’ve seen both episodes of Black Lightning, I’m just waiting on that ONE moment that grabs me…nothing really outside of the dope soundtrack has yet.

I feel like Arrow is slowly winding down…I couldn’t get into the show after the on again off again engagement.

Marc Bernadin on the last Fatman on Batman was asked what he would do if he and Kev Smith were given the crossover next season; he said he’d make it the finale event and write the death of Oliver Queen and to be honest I can’t see any reason not to do it. The show started the whole DCTVU, sure, but it’s never been great and it’s been middling at best since season three started. Creating a whole event around the loss of that character, transitioning the other characters from that particular show into roles on Flash, Legends, and/or possibly Supergirl or Black Lightning (which is seemingly being kept separate for now but will undoubtedly end up joining the larger “universe” at some point) would be the best way to end it gracefully and make space for the better shows and characters…

Plus a character is never truly dead in a genre like that, there’s always plenty of options for time travel and multiverse versions of Oliver to come back every now and then when they wanna spike some interest and are short on other ideas.

Anyone watching SyFy’s Happy! It’s based on a Grant Morrison book, which is a name anyone into comics will know, and it is deranged; it’s about a disgraced former cop who’s now a hitman hunting down a kidnapper with one of the children’s imaginary friend - a blue unicorn voiced by Patton Oswalt. I’m really enjoying it but it’s certainly not for everyone.

Just saw season 2 of Better Call Saul after falling behind since Season 1 ended on TV. Can’t wait for Season 3 to hit Netflix

Being British, I love lots of comedy; Bottom, Blackadder. IT Crowd, Friday Night Dinner, Red Dwarf and Monty Python to name a few.

I would happily reccommend these comedies, they’re so good!

I absolutely love Happy! so twisted and the humour is right up my alley. Chris Meloni should he cleaning up at awards shows this year imo.

Same here. I watched the DC/CW shows religiously but it felt like with each season (and each new show) the quality kept going down hill. They just don’t have the staff, budget or ideas for five 22 episode series all at once. The crossover episodes are the only ones it seems like they go above and beyond to ensure they are really good.

As a big comic book fan I also watch a lot of super-hero shows though. The Netflix MCU shows, Runaways, Agents of Shield, Gifted, Legion. They’re all pretty good. I stopped watching Walking Dead a few years ago.

John and Wai are usually really great for TV recommendations too. I watched American Vandal after John talked about it and it was probably the funniest show I watched last year.

Same here. I watched the DC/CW shows religiously but it felt like with each season (and each new show) the quality kept going down hill. They just don’t have the staff, budget or ideas for five 22 episode series all at once. The crossover episodes are the only ones it seems like they go above and beyond to ensure they are really good.

I’ve got to disagree on this man, sorry. Arrow was always the worst of the bunch in my opinion and has never lived up to the quality of the other shows. Flash has been on a slow downward spiral but nothing compared to Arrow’s nose dive after season two. Supergirl has got better with each season, Legends is just a fuckton of fun and it’s really too early to tell how things will fare for Black Lightning. I also feel like the last crossover had way too much going on and we didn’t get to really focus in on the story…

Everyone’s opinion is different though. It’s just a shame you’re not enjoying the shows as much as you used to.

I don’t watch much TV as I have a short attention span and can’t binge a show without getting bored by the third episode.

Saying that, TV shows which have hooked me the last couple of years are Peaky Blinders, Stranger Things, American Vandal, DareDevil, F Is For Family and Preacher.

On the subject of Preacher, I’m really not feeling it 100% yet. Don’t get me wrong, it’s a good a show, it just would probably be a better show if I hadn’t all ready read the comics. I’m trying hard not to compare the show to the comics, but it just doesn’t feel like Preacher. The casting is great, it’s funny and the dynamic between the main characters is constantly evolving. That’s all great. It isn’t what I imagined it would be, but it’s a fun watch. However. the show does seem to have an issue with pay-offs (some story lines are concluded and seemingly brushed off with no lasting effects), some of the characters are awful (i’m not enjoying Dennis at all), Jesse’s character arc is real dumb at times and there’s some stuff I thought they could have spent more time on. But overall, it’s a work in progress and they may hit their sweet spot in season 3.

Being British, I love lots of comedy; Bottom, Blackadder. IT Crowd, Friday Night Dinner, Red Dwarf and Monty Python to name a few.

I would happily reccommend these comedies, they’re so good!

Excellent choices there! I’m not a big Red Dwarf fan though, it just never really struck a chord with me. I’d replace it with Black Books or Green Wing. Saying that though, there hasn’t been a decent British comedy in well over a decade now. All we seem to pump out these days are dime-a-dozen NMTB rip-offs and sitcoms based on catchphrases and ‘bannttaahhh!’.

The Flash, Black Excellence Lightning, Luke Cage, Stranger Things and mostly animated shows that no one really cares for here.

Arrow is a chore to get through now. Was a huge fan, but After season two, it went downhill (I still get a kick whenever Slade shows up), but at least it’s not as dreadful as Iron Fist!