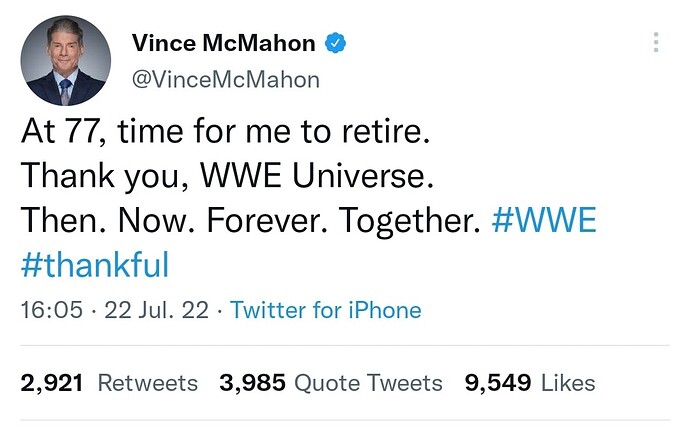 So, my guess is some big shit was about to come out.

This last round of news clearly showed the writing on the wall.

The fact he’s not even sticking around through Summer Slam is very telling.

I have no doubt WWE will be sold in the next six months.

Like seriously, there must be some serious stuff uncovered.

Also, great week to be on vacation @johnpollock.

Yes, great week for @johnpollock! He would’ve been mentally drained by Smackdown tonight.

I feel like this is going to likely cause some major drama.
On a corporate level, Stephanie has already been fired once recently, and bad mouthed for under performance.

I strongly believe WWE is going to be sold sooner than later. And, in the ultimate irony, fully evolve into what WCW was during their final years, in terms of an IP owned by a major conglomerate.

Now the real fun begins. Where do we go? Sold to conglomerate, or something else. One thing though, do we see any aspect of TV improving soon…

It’ll be interesting.
At this point, the company is such a machine, that I don’t see it slowing down.

What will become interesting to see is the fact there are definitely people who are Vince’s guys. Who is given the boot soon, and who sticks around. 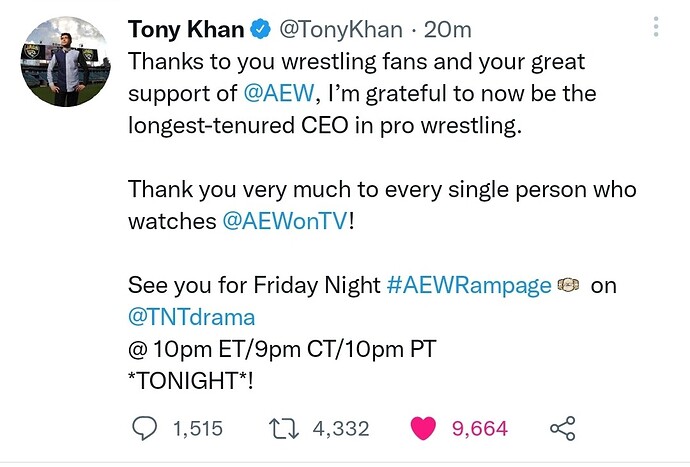 What a weirdo way to announce this.

Do you expect anything less at this point?

MarkP July 22, 2022, 8:56pm #13
@
The amazing thing about Vince's "Well, I'm old, time to retire!" framing is that every move WWE's made in recent years has been about systematically forcing out anyone that was being groomed to replace him. They were so clearly not planning for this moment to come any time soon.
@
Like they are currently in a position where the people holding the wheel are Steph, who they smeared as incompetent a week before this all started. HHH, who was sacrificed as the reason why NXT failed and had the last decade of his work erased. Oh and uh, Bruce Prichard. Great.
@
There is maybe 1 and a half working hearts between those three human beings so I am sure this sudden huge increase in pressure and responsibility will have no ill effects at all.
mbh July 22, 2022, 8:57pm #14

Double J taking over I guess…

So…might also be worth reading the press release…

Vince remains majority shareholder. So what does this all mean?

@
Vince McMahon is retiring from all roles, including head of creative, a WWE spokesperson confirms to me.

Although the dynamics of people who had close relationships with Vince, and those who maintained them in order to stay in WWE’s good graces, are all very interesting to think about right now.

Supposedly this whole thing is having major implications about Brock, who has apparently left the Smackdown tapings.

Has Brock gone as well…??

Has Wai had a baby?
Wheres john???

I’m glad they’re away to be honest, I’ll enjoy an overview of this whole saga in a weeks time when the dust has started to settle.