What's up with this Corey Graves story? 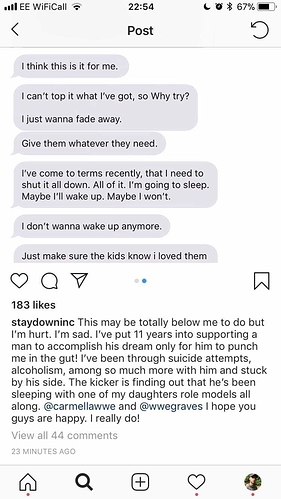 It’s going to super awkward when he is commentating on Carmela’s matches now just like it is with Renee and Dean. They really need to have a rule where the announcers can’t date the wrestlers. This has become a real awkward thing for them.

Remove Corey from announcing. He’s been unbearable for months now

As with Jerry Lawler, it seems that being sex crazed on commentary isn’t just an act. Looks like there’s something to finally look forward to in the women’s Elimination Chamber match.

With those type of story, i always wait until we have the full story before judging it. For now, this feel more like Corey’S wive’s was a little drunk and went on instagram and drunk post something that wasn’t true. The fact that see deleted the text and just keep the photo on her account kinda point me in that direction as far as the story goes but i’m sure if they’re more on this story to come out that Corey and his wife will address it at some point but for now this feel more like a gossip story then anything else.

Nothing about it seems untrue. Idk what makes you think a woman blasting her husband and father of her children for cheating is untrue. This is exactly how things played out for KFC from barstool. Wife went to social media to blast him, deleted posts, eventually he had to explain on radio. I doubt Vince is making Corey explain on commentary.

With those type of story, i always wait until we have the full story before judging it. For now, this feel more like Corey’S wive’s was a little drunk and went on instagram and drunk post something that wasn’t true.

Corey Graves should have cheated with Mandy Rose to protect kayfabe.

I’m sure he would he if the opportunity presented itself.

I feel this past week has been terrible for Graves, and that he essentially brought it on himself. First the Twitter tirade where he defended Bill DeMott and implied that it was normal wrestling training that other people couldn’t handle, and now this story.

The one-time Savior of Misbehavior should probably think twice.

I remember this! If I recall correctly, she developed kind of a rocker motif after turning heel and aligning with Sasha Banks, throwing up the horns and everything, and Graves kind of shat on her, thinking she was being a poser.

New details have surface in this story which i feel change everything. The fact is, if you believe what prowrestlingsheets.com reported, Corey and his wife have been in divorce proceeding for the past six months and they weren’t even living together for the past 2 months. Then corey inform his soon to be ex wife over the weekend that he was seeing someone else and she reacted publicly on instagram.

So for me anyway this change everything as they are getting a divorce and they’re was no way that thing would get better if they were trying to finalize the divorce for six months now. He has the right to move on and go out with somebody else if he want too at this point. The sad part with things like that is that the kids are always stock in the middle, especially when it comes to a less then happy divorce like it seem they are going through. The fact that Corey is trying to keep this between him and her and not being to public about his personal life is remarkable. Her reaction was what it was, She was angry that he move on and decided to lass out on social media. then realize how much of a mistake this was a closed her account. Now they can move on and try to fix this as much as they can between the 2 for the sake of the children’s

We dont know them…why should we care?

Not the first man to cheat on his wife, won’t be the last.