The tease of of Raw and SD stars will help NXT, but I think AEW has established their audience by now.

AEW, but it will be by a tighter margin.

I still feel that AEW has it’s “NEW SHOW BUZZ” among the IWC fans.

Added the fact i have to wait 26-hours for NXT VOD as I work each week during its live airing and “alternative means” normally has it removed within the time I’m at work and the time I get home.

Honestly if loading up NXT without major sports compertition, I’d hope it would do better then 2-weeks ago.

Yeah I think the ‘doors open’ tease will give nxt a bump and aew probably won’t be higher than last week despite a pretty nifty card. Still think dynamite will have the higher number though.

I’m guessing the 1st invader will be a star.

I think the gap will shrink, but AEW still draws a higher number. Unless there’s reason to believe that AEW’s rating will drop significantly from last week (957,000), NXT would need to increase its viewership from last week (750,000) by more than 25%, which feels like a huge jump.

I mean the best thing would be for AEW not to lose viewers and NXT to gain as that means more total viewers rather than the same number of 1.6 million or so people going back and forth based on what is on the show.

Despite the build for survivor series, I still think AEW takes it. 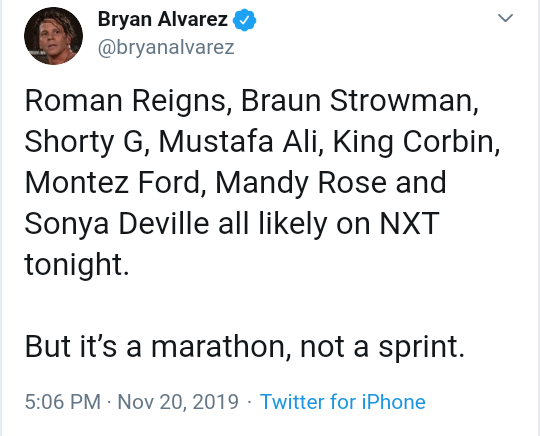 Certainly WWE is pushing to make NXT have better numbers. If NXT fails to beat AEW this time, then I wonder if the folk in WWE HQ will just sit back and simply accept that NXT on USA has one role: to keep AEW from having even bigger numbers.

However, if NXT does beat AEW, which I think many are expecting though this forum so far does not appear to believe, then the issue will be if NXT can keep those numbers without having Raw/Smackdown stars on the show. To me that kills the whole feel of NXT and why it was an alternative to begin with.

Eight weeks lol. They may as well just have Michael Cole announce too.

I am watching NXT Live first for the first time since AEW launched - reason is I am at the office and my DVR will pick up Dynamite so I figured I’d stream NXT now.

That said there is a certain kind of alumni I want back, and a certain kind I do not. Roman Reigns, nope. Braun, nope. Corbin who had a very non-memorable run in NXT, nope. This is watering down NXT.

However, if NXT does beat AEW, which I think many are expecting though this forum so far does not appear to believe, then the issue will be if NXT can keep those numbers without having Raw/Smackdown stars on the show. To me that kills the whole feel of NXT and why it was an alternative to begin with.

Good point
And if it does not beat AEW, well, Maybe AEW should move to Mondays

I split screened the first 5 minutes Becky on NXT, Nick Jackson vs Fenix on AEW. I watched AEW full screen, Jackson and Fenix had a hell of a match with a clean finish. I put my DVR to NXT to see Rhea come out, Rhea and Becky agree to a match and I say this is gonna have a shit finish…GUESS WHAT HAPPENED

I’m going to put this in here… anyone else notice the commentators are a little quieter tonight and the crowd volume is up? It worked great for the opening match, but also felt so different than usual wrestling on tv.

Okay, so it is alarming to me how different talent we see on Raw and Smackdown regularly feel back in their old stomping grounds. The crowd - a fraction of the size of arena settings - is excited to see them and they feel rejuvenated and energized. It is very obvious that the same presentation of the same talent week after week is so stale for Main Roster.

This crowd has history with these acts and it shows. I’ve said this about AEW…when a crowd is into an act or character, they feel like stars no matter where on the card they are. On Raw/SD, the casual attendee has zero history with so many of the talent because their is no character development outside the tippy top of the food chain.

The Dark Order video was probably better than anything on NXT. I know people will hate it, but I loved it.