Watch video of this podcast at youtube.com/POSTwrestling

When I saw this, all I heard in my head is “THIS IS AWESOME” clap clap…clap clap clap

Joking aside, its great to see you guys doing this, the four of you always had such amazing chemistry. I used to love the Christmas Gift Exchanges on Youtube.

“Reunited and it feels so nice”

This makes me happy.

For all involved, I’m happy to hear them come together for this special occasion.

As a long time listener of the LAW I was really looking forward to this however it seemed a bit awkward. It’s like there was an elephant in the room… especially at the beginning

Is there some backstory that we don’t know about…

There was some falling out between John and Jason after the LAW ended, no idea what happened but Jason did do a few “jabs” on air towards POST over the past few years, I don’t think John has ever addressed it (which is fine, he is a professional). Braden also talked about some of the issues he had after the LAW ended on one of the Behind the BDE episodes.

Wai and Jason seem to be on good terms the entire time as well as Mouth and everyone, the issue seemed to only be between Jay and John.

As someone who is both a Patron of both POST and SNME and Involved in both communities, it always sucked because it felt like this awkward divorce, and I’m like “I like all 4 of them”. I even tried to ask about Jason in an Ask-a-Wai a few years ago but they didn’t address it, which was honestly the correct thing to do, John tends to take the high road publicly, Jason, not as much, but I think he has softened over time. I always got the sense Jason took whatever happened more personally than John may have.

I’m hoping that this “thawing” has helped Jay and John, it was honestly sad to see (the issue between John and Jay, this episode made me very happy).

I’m hoping this means we will finally get Jason Agnew on the Christmas show, most of us LAW fans kind of notice his absence each year especially since Mouth shows up. Kind of like the WWF not recognizing WCW back in the day lol

I could see the awkwardness of Jason and John at the beginning but I think they settled into “LAW” mode.

Well look who just gave his seal of approval! 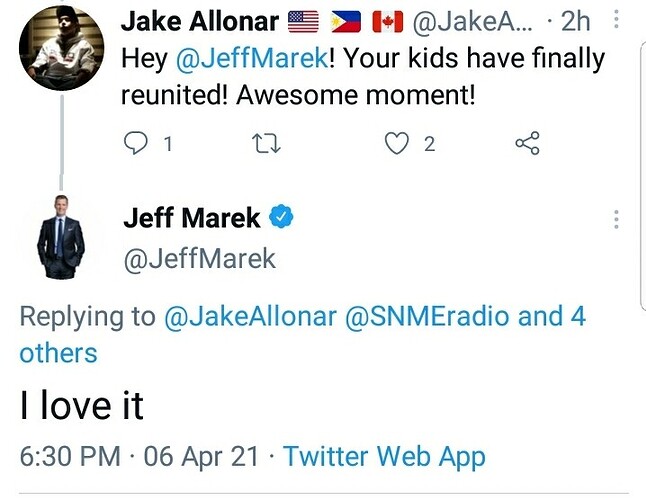 @johnpollock @wai0937 should of done this on post podcast day, think of the pop! you four would of blown the roof off the place!

I had such a big smile on my face when I saw this show. I guess you never ever know what surprises Post Wrestling is gunna come up with next.

Guaranteed if you put a shirt up on the post wrestling store of you four it would be a sell-out I’d buy one.

Never particularly liked Agnew all that much but it was still nice to hear him after all these years.

The 4 of you hyped me up more for Mania and Takeover in 1 hour than WWE did in 4 weeks. Cheers!

I actually remember when Agnew created SNME after the LAW ended, I joined that Patreon right away (as I joined this one at launch as well), and I could see that he was trying to figure out what he was going to do at the time. I found POST to be more fully formed at launch as John ad Wai kind of had their direction already.

Ironically I never particularly liked Agnew on the LAW, but him having to ad-hoc SNME and basically grind in the beginning, and found him quite approachable with suggestions and feedback completely endeared him to me, he went from the “star” of the LAW to the scrappy underdog on SNME, although I could have done without his snide comments towards POST wrestling especially in the beginning.

Honestly my initial impressions of SNME was that I felt Jason was trying to prop up the remnants of the LAW, as it was just him in the beginning, Mouth didn’t appear on the show for a while if I remember correctly, so it was Jay solo. So it was kind of sad to see at first, but as Joe Aguinaldo and Mark Andrade joined, then Bartender Dave left UpNXT and joined SNME I felt like Agnew’s “heart” got back into it.

I actually think SNME started hitting its stride last year, Jay has finally figured it out, the PPV after parties are a ton of fun, and they have created a nice lineup of podcasts.

As soon as John teased a special guest moments before posting the show, I knew this had to be it. Really great that any beefs have been set aside for this.

Life is too short to hold a grudge.

They knew the large majority of the post wrestling community wanted this & that is what is so great about it, setting aside their differences for us.

Great to hear these guys back together

John was fantastic here. Just well prepared, throwing in a few icebreakers and lame one liners to keep things moving straight in likely some uncomfortable waters. A professional display all around.

It was a fine listen but I would take what Post has become to what the Law was every time.