On Monday morning, WWE confirmed that WrestleMania 37 will take place in the L.A. market in March 2021.

The news was made through a press release with the company’s annual event slated for SoFi Stadium and Hollywood Park in Inglewood, California on Sunday, March 28th.

Vince McMahon was quoted in the press release stating:

On behalf of everyone at WWE, we are excited to bring WrestleMania back to Los Angeles. WrestleMania will set the bar for future sports and entertainment events held at SoFi Stadium as we add this facility to the list of iconic venues that have hosted our pop-culture extravaganza.

Additionally, the city will host the usual events that accompany WrestleMania with NXT TakeOver, the WWE Hall of Fame, Friday Night SmackDown, and Raw mentioned in the press release.

This year, to accommodate SmackDown’s move to Friday nights, the Hall of Fame is moving to Thursday night.

SoFi Stadium will open this July and will be the home of the L.A. Rams and L.A. Chargers of the NFL. The first set of events are scheduled to be a pair of Taylor Swift concerts on July 25th and 26th. The stadium will host the Super Bowl in 2022.

It is the fourth time that Los Angeles has hosted WrestleMania with the show staged in the city previously in 1986, 1991, and 2005.

At WrestleMania 2 in April 1986, the L.A. Sports Arena was one of three locations for the show and featured a Steel Cage match between WWF champion Hulk Hogan and King Kong Bundy.

The 1991 event was originally targeted for the L.A. Memorial Coliseum but was shifted to the smaller L.A. Sports Arena where Hogan defeated Sgt. Slaughter for the WWF title.

The 2005 show occurred at Staples Center with Batista and John Cena winning their first championships with the company.

Because WWE stopped using the numbers regularly it seems crazy that they will be up to 37 next year. It feels like WM30 was just a couple of years ago. How time flies…

Anyway, it’s a cool logo that someone’s going to be able to point at. 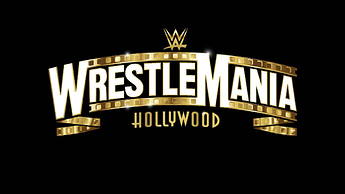 So, is this the 45th anniversary of wrestlemania?