We can bitch and moan all we want about WWE but let us never forget the Wrassling company from New York hit $100 on the stock exchange today. So yes, none of us are as wise as the people who run that company. FWIW a year ago it was trading in the upper 20s/low 30s. 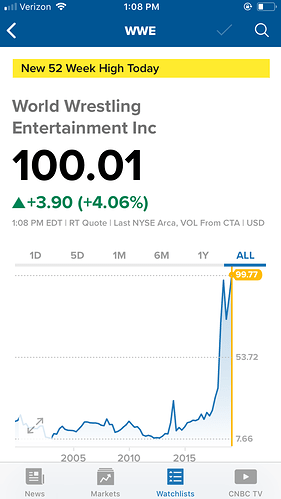 It’s almost like that 73 year if man knows what he’s doing.

I really wish I wasn’t too paranoid about stocks and bought in after the collapse in 2014. I would’ve made bank.

Also reinforced my opinion that people really didn’t care when it came to their respective scandals over last year and recently.

Vince has paid for me back for going to Mania, etc. Thanks Vince!

Scandals don’t matter when you can report X hundreds of millions as reoccurring fixed revenue. At least for the next 5 years.

And for all the talk of ratings - it won’t matter for 3/4 years til they renogotiate and by then the entire landscape of TV and Media can be different. This is what the simple wrestling fan forgets. Vince CAN do whatever he wants. And yes, that includes going to Saudi because they’ve planned on that income to investors.

I’m not sure how to quantify going from a $30 stock to a $100 stock in 12 months when we’ve seen a 20% drop in viewership. If people thing ratings are the measure to judge they are just wrong.

I truly think fan engagement and the brand is at an all time high and that’s what the selling point is to any and all partners. And it’s resonating

You just look at the live attendance for TV tapings and PPV. That a big selling point for them to sell to investor when a show like RAW which we pretty much all complain that it’s a big the number show every week, still get mostly sellout across the world every week. Fans compalin about the product yet they don’t mind paying a ton of money to travel for big events like mania and summerslam. So that’s another big selling point.

Vince and company can do what they wants at this point, they know that while ratings are down, it’s not the be all and end all anymore. They have domestic tv deals that are worth a ton of money and they are lock up for a long time with those deals. The saudi deal still have 9 years left on it and that’s bringing a ton of money and is a positive spin you can give investors. You also in a certain way look at the canadian tv deal they made with Rogers which is worth a lot of money for them and will probably get a lot more from rogers to keep that deal when the current deal is done.

In the end, WWE is pretty much a brand now, nobody really see it as a wrestling company anymore outside us fans and the wrestling media. They can pretty much do what they want and still get fans in the buildings and get a ton of money from investors because they pretty much are the brand that everybody in mainstream associates with Wrestling. So in the end with everything that happened over the last few years and the great deal that vince and company where able to make, i’m not surprised that the Stock is at a all time high.

All based on weak attendance and dwindling ratings.

bUt tHe StOck PrIceS…

Still infinitely more profitable than any company in the world by far…but cling to tee shirts and one show.

Imagine talking down to a person who eats at a local steakhouse because they passed up the opportunity to enjoy food from the much more profitable McDonald’s corporation.

The WWE has tried every trick in the book over the last ten years to increase profits with the exception of putting out a very entertaining and engaging on-screen product, hopefully this will inspire them to put some energy in to that endeavor. I imagine the stock price will quickly rebound once the Kingdom of Saudi Arabia starts to pay them a few extra hundred million a year to execute political and social dissidents via working with Nia Jax.

Just got caught up on this week’s Smackdown. Can’t wait to see the ratings to find out if I enjoyed it or not!

OOOOF down 13 per cent for the day.

But hey its because of injuries and we will solve that by having more shows. Make SD three hours. Mania can be 15. That will solve the injury problem.

If any of you heard me on the Cafe, I had some reasons why I think the stock took a bath today. I’ve been openly bullish on the stock since last year before the Fox News and rode it from the 30s to $100. It’s paid for me to go to more shows and why I’ve been generous with my extra tickets here - (until somebody took advantage, story for a different day). Here’s my take on the stock tanking, which in my view was an over reaction.

Taking gains:
When a stock reaches an all time high or is testing its high point of resistance it is common for investors to take gains. For example, in Dec during the market selloff the stock fell back into the 60s and I went back into it heavily. As it rose I took gains on those trades and had planned no matter what today’s news was to sell first thing this morning. The stock was down nearly 10% at the opening bell which suggests heavy trade volume to occur pre market. More than usual, and faster than the public could react. Now the bell rings and it’s down 10$. So everyone sells for fear of it going further south. That’s a pile on reaction to institutional traders taking their gains off the table. The bad news bad a catalyst but as we saw Tuesday, the stock hit $100 and came back nearly 2% immediately. Had it broken out to the upside, it may have ran up to $110 or higher because the resistance to $100 would have broke and there would be less fear that it could reverse based on those waiting for a sell point. That’s the most dumbed down version of technical analysis I can give. So the sell off today was a function of institutions taking gains and likely have trigger prices on the way down to automatically sell at certain levels. They are called stops. It can snowball and was one explanation for the market sell off late last year. It’s common when record highs are in sight.

The other major factor was that this has been a great momentum stock for a year. When my non wrestling fan friends are calling me asking when to buy and is it too late throughout the last 6 months it signals to me the stock has gotten hot and atteactive to momentum traders looking to ride something on the way up. It’s a big thing in the canabis industry now (see Tilray’s rise to $300) and was a big bitcoin catalyst. There is nothing that spooks such traders more than the first sign of bad news. Because ultimately all they know is the stock price and not the company. When the stock goes up they thing it’s a can’t miss and when it goes down they think the bubble is over.

Now for us who follow this industry we know two things: financially the company is as stable and lucrative as ever, and from a star making and week to week product perspective they are suffering a lull. We saw this lull after the Attitude Era. We saw it when the last TV rights deals weren’t great. But they’ve always found a way to climb back. Say what you will about Roman, but he’s carried the mantle from Cena. And while he’s been gone it’s been felt. But they need to do more and now they have the runway financially not to panic. Plus, with increased competition coming we know there will be a focus to improve like w heavens seen in years. History shows that Vince rises to the threat of competition.

Looking ahead: Q2 will be a strong bounce back quarter. That’s April-May-June. Pencil in $16+mil in April for Mania, and let’s esrimare another 8 figure pay day for Saudi Arabia. The trend line on revenue will look great compared to Q1. That should help calm worries. It’s not like they revised guidance which companies struggling to meet targets will do. That’s a real cause for concern. Instead they reiterated their estimates. Good. And with the Fox Upfronts and the way they likely will be presented, that should help shine a good light on them and any corporate partnerships or deals coming out of that will be met well by Wallstreet. In the latter half of the year you’ll see the TV money hit. Clarity on Intl tv deals. And potentially tiered network pricing which should be a plus. I do think they have found the ceiling on current subscribers but still argue a million ppl will stay subscribed no matter what they charge as long as it’s comparable to other platforms. That’s found money to them from an audience conditioned to spending on wrestling. Plus who knows what additional rights fees come for FS1 content or other Fox property deals.

They do not do themselves any favors. They don’t want to get into specifics on so many topics that as the call went on today it felt very deflective and the stock went further south. But knowing what we know about the industry (red hot) and their plans for growth, it’s not like they aren’t going to do solid business.

And I think that outweighs the drops in live attendance and YouTube views. Now how long with those benefits outweigh the losses in key metrics. Time will tell, and the timing of certain initiatives and contracts will make it a quarter to quarter thing. But I still am very bullish. Locked up revenue like TV deals and partnerships in other countries is a great thing to have as a baseline for record revenues. So therefore it’s a good buying time unless you think the company is doomed. Which, they aren’t. At least for 3.5 more years til the next TV negotiations come due.

Nothing to do with 2 billion and a half dollars of guaranteed revenue for the next 5 years.

Dumbest thing I read all week and I was arguing with a man with apparent Asperger’s all week.

Must. Resist. The. Urge.

The obvious joke is the lowest of the low hanging fruit.

Peaks and valleys for everything.