I don’t think you meant it this way, but I think its a bit disrespectful to John and Wai to call what they do here an “online BLOG”.

I see how it may come off that way but I just don’t see blogger as an insult.

Re: the NFL, it has backfired on them because of the NFLPA fighting suspensions. Ironically that’s not a problem in Wrestling.

Suspend while being investigated. Not suspend if arrested. Most these guys will never be arrested.

I like what @Bdubz suggested - suspended if a complaint is formally file to authorities. Though it’s a gray area because it puts the onus on the accuser to file charges or report it to the authorities which many victims of assault do not want to do.

And it’s ridiculous, in my opinion, that you’re making this an “OMG WWE” situation. It seems like most of this stuff happened on the indies where there’s less oversight.

I don’t disagree and feel bad making it a WWE only thing. It is actually way more outside WWE and I only posted in reaction to their statement and policy set forth.
It’s clearly more widespread in independent scenes (at least what’s come out so far). That statement though, it’s like they will probably still debut Riddle on Smackdown before there is resolution to accusations made against him.
They also are one of the only promotions running and have visibility and influence to really set a standard for change instead of essentially nothing. Going one further, Starr was let go immediately while NXT UK talents only suspended so it appears Indy promotions may look to WWE for how to handle it. I would hold every other promotion to the same standards depending on the statements they issue and what they opt to do when they come back to running shows.

Goes both ways, you know? Especially for someone that was flagged for years that she stalked him and his family.

No, it’s not out of touch. It’s a fair comparison. You not caring if allegations are true or not and you not caring about people losing their jobs is pretty shitty in my opinion.

It’s possible to sympathise with the accuser while not treating the accused as already being guilty. The barrier for wanting to negatively affect someone’s life should be higher.

I have no issue with it costing someone their job.

I very much doubt you would be saying that if you were in the same position.

Comparing people being called out on line to people being beaten, hanged, and murdered is out of touch entirely. My issue with requiring “proof” is that it is damn near impossible unless an immediate rape kit was performed. Beyond that no proof exists. I also never said everyone should lose their jobs, they could be suspended pending an investigation. But if multiple allegations come up I have no issue with termination. Especially from a position in entertainment where being likeable is your job. If the public hates you regardless if it is fair, you have no place.

Hey, remember when Enzo got fired for alleged rape that turned out to be fabricated by a crazy person?

I know in his case it was the straw that broke the camel’s back, but essentially this was what made WWE to make the release = him losing his job. False allegations. This is no justice. This is taking advantage of an situation.

But I’m not, and for good reason I don’t put myself in situations where allegations like this arise. Unless your argument is that random people frequently accuse people of sexual assault…which I very much think isn’t true.

Further if I am accused of sexual harassment at my job (not assault) I can be terminated for cause pending an internal investigation.

Calling for suspensions or terminations is a gray area, especially before investigations. At the same time, reality is likely none of these accused will be arrested much less convicted. It’s a SAD reality of how sexual abuse is processed in the criminal justice system.

If fans do not call for more strict actions by promotions, promotions will ride this out and likely not punish talent they view as valuable. Example: Progress seems to have only suspended NXT UK talent while Starr got terminated.
If there is not real consequences for repeatedly being in these positions that result in multiple accusations then I’m not sure how the culture changes. No consequences = no change. It almost creates a culture of protection against consequences where people continue to think they can get away with it.

I feel weird calling for immediate action but I kinda recognize without it, what will change?

Unless your argument is that random people frequently accuse people of sexual assault…which I very much think isn’t true.

In what world are you living, dude?

Well, we talk not exactly of “random” people doing this, but perhaps people with agenda or strive for attention AND malicious intent towards said person. This happens all the time, especially in the US.

@MJfromNJ I believe that whit such a scandal people will be way more aware of what they are doing or what is being done to them. Consequences for different persons and cases can vary. Especially if there are actual evidences or witnesses, so that person can be “pinned”.

And because proof is hard to come by you’re just gonna pretend that it exists? If there are a number of accusations against a specific person and they all fit a pattern then I can understand people leaning one way. But when it’s a “he said vs. she said” situation, it’s just irresponsible to back either side 100% unless you’re a close friend or family member. People in a neutral position should behave a lot more objectively. That doesn’t mean harassing and verbally abusing the accuser but it means you don’t harass or verbally abuse the accused either. Or try and get them fired…

I have no doubt that there’s an industry wide problem as it’s a planet wide problem that exists especially in industries where defined power structures exist. The movement is great in making people take notice but as I said before, when crucifying specific people there has to be more than an allegation.

Hey, remember when Enzo got fired for alleged rape that turned out to be fabricated by a crazy person?

Enzo got fired for not telling the office there was an open rape investigation against him. Might have been a little easier to defend the guy if he informed them of the matter.

Thankfully in civilised countries in Europe where justice is still considered important you cannot be fired until convicted (if an external incident) or found guilty of gross misconduct via a disciplinary process (if an internal incident).

I hope you are never asked to serve on a jury as you are clearly unable to be impartial.

It really doesn’t happen all the time though. It happens but far less frequently than actual sexual assault goes unpunished. Men’s rights groups want people to believe women commonly falsely accuse men of sexual assault. They don’t it isn’t a common occurrence. That doesn’t mean it never happens, but are we really buying that all these allegations are blanket false because all these people have a grudge and simultaneously decided now is the time for revenge? 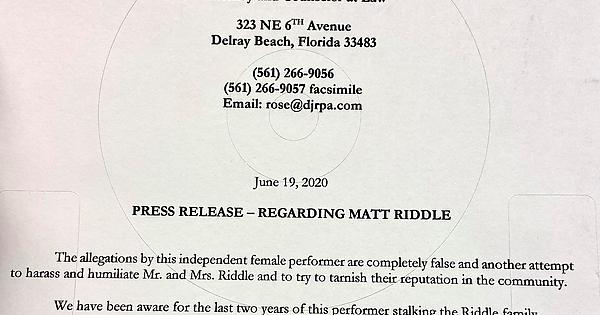 Riddle: Hey bro, can you put out a statement, not printed on filing labels?

Lawyer: Ah, we got you Matt.

The solution is to change the criminal justice system, not to summarily decide people’s fate based on unsubstantiated claims on Twitter.

But this isn’t a jury no one is going to jail.

They also really did not like Enzo and had no problem firing him and letting people draw their own conclusions. He was disposable to them and when he became a problem they cut ties. Kinda like when some of these coming forward begin to push back they get cut off and see their opportunities go away. It’s a sick sick culture propagated at the highest level. I mean shit, didn’t Vince make his own allegations go away? Didn’t he use to book angles rooted in this kinda disgusting behavior. I mean they literally had him objectifying his own Female talent on Live TV. What a culture

It is a poor metaphor, and if no consequence exists nothing will change.