Here is an update for everyone. Apparently, if you use your cable provider to access the WWE Network you will no longer be able to use the app on mobile devices.

Thank you for your response.

You were using a cable provider to sign in? Doesn’t that just limit you to a TV?

They used to have an authentication service in the app that would check with the cable company that you were a WWE Network subscriber.

As a software developer I cannot believe how difficult they made it. It’s wild.

So do you still need a cable provider to get the network in Canada?

Yeah, after you signin via desktop (and probably mobile web) you are greeted with this hot mess of Canadian cable providers: 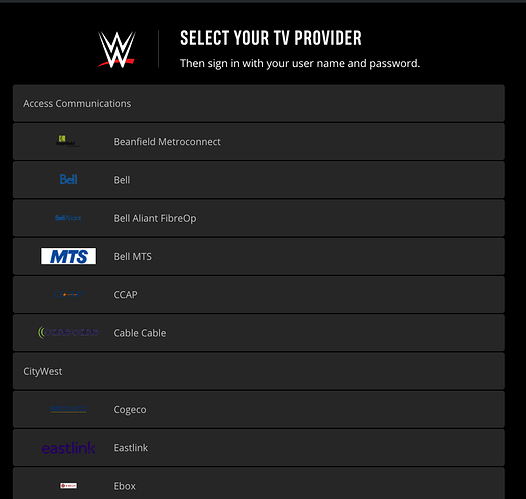 In the age of cord cutting I don’t know why they make their subscription service work this way.

Yeah for customers it’s trash, but for WWE I guess it’s worth losing the (would-be) subscribers for the money that the cable companies pay them.

I know John complained of the number of screens it took to log in prior to the update but at least it worked on the app. I stream everything using my Google chromecast on my phone with the app. Without the ability to use the app on my phone I doubt I’ll use the online network at all. Canadians used to get the best of both worlds with the channel and the ease of the online library. I think my friends who have the American version have the superior one.

Brutal. So are you still able to sign in and watch through that watch.wwe.com site? I used to use my tablet to watch some stuff when I had the network. If that’s no longer possible I doubt I will bother getting it again.

My interpretation is yes but as a chromecast user I won’t be able to steam anymore unless i am using a laptop and the chrome browser.

I posted something similar but in the US. I have a TiVo box with my Cable and it previously had the WWE app which is how I played it on my tv.

It is no longer available after the update which is a major bummer. It’s made me question keeping it.

I got a similar reply from tech support, but they indicated that this would be fixed in the future, but no timeline was given. So hopefully this gets rectified soon

If they dont fix it by summerslam im canceling my subscription, the guys who design the app are retards, ive never used such a bad streaming app like wwe and this is a rich company, how pathetic. Also it lags on chrome so app is all i got.

I’m day one subscriber to the US version, so my favorite bit of this “upgrade” is losing the ability to stream with Chromecast.

I can get the network to load on my mobile phone app but it will not cast to a television. I have tried to get it to run on my desktop or laptop on both IE and Chrome. The stream appears to load but then hangs and never actually starts.

Anyone else have this issue? I mean what am I paying for if I can’t watch it on a screen larger than 8" ?

Im having thr same issue. Haven’t used it since the stupid update.

I’ve used the twitter account @askwwenetwork on twitter and they told me that Chromecast isn’t compatible at this time. My hope is it will be in the future as it’s the way I watch the WWE Network at home and at work.

Was told the same regarding chromecast on the online support chat,was 208th in the queue to speak to someone,spent ages on there due to up to 10 minutes between messages,turns out the support person I was talking to was talking to 3 others at the same time.
The support I got was turn off and on whichever device i was using.
Ps4 and Fire tv were bobbins last night.
Illegal stream was flawless.

The WWE Network is now so bad i had to download a pirated version of one of the biggest shows of the year.