The WWE was able to offset their recent week-to-week declines with a modest 4% increase for Monday’s episode of Raw on the USA Network. It was still their second-lowest viewership of 2019.

The three-hour show averaged 2,244,000 viewers with a reactionary program to the declining numbers. The major changes included the introduction of a new “Wild Card Rule” where four SmackDown talents can appear on Raw on any given week and vice versa with Raw talent appearing on SmackDown. Monday’s episode featured Roman Reigns, Kofi Kingston, Lars Sullivan, Elias, and the return of Daniel Bryan.

Instead of posting highlights of Raw to YouTube during the broadcast, they waited until after the show to begin adding them to their channel.

The show opened with 2.47 million viewers, it fell to 2.24 million in the second hour and finished at 2.02 million in the final hour. The main event saw Kofi Kingston defeat Daniel Bryan in a rematch from WrestleMania in Bryan’s first match since losing the title at MetLife Stadium.

The silver lining was a small increase despite heavier competition from the NBA. The doubleheader saw the Milwaukee Bucks vs. Boston Celtics game attract 3.72 million viewers. At 9:30 pm Eastern, the Golden State Warriors vs. Houston Rockets game began and did 6.88 million viewers on TNT.

I’m not ruling out the revival storyline

Yep I called this personally. You announce Roman will be there and it will go up. I love the new wild card format.

Every week a new superstar or two will be there. You never know who so you have to watch. It’s brilliant.

Also while I don’t think the Revival stuff draws ratings I really want to see how they humiliate these guys next. Are they drinking toilet water next week? Or maybe smelling farts? It’s kind of cool guessing what lies Vince will make them stoop too.

Plus remember that amazing Saudi line up with UT and Goldberg and Lesnar will pop ratings. I think they are going up - way up 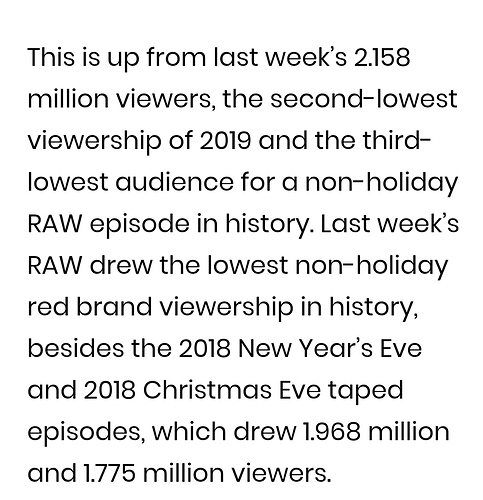 It’s a huge turnaround. They were up against a warriors game and they didn’t even lose an audience. They gained it.

It’s actually amazing how big a effect Roman has

If this is what people consider a victory now, that’s genuinely depressing.

Yeah, it was only the fourth-lowest rated non-holiday show ever.

The good news is that between 16 weeks of Monday Night Football, the College Football and Basketball National Championship Games, Memorial Day, Labor Day and 8-10 weeks of NHL/NBA Playoffs, the ratings only matter about half the time anyway.

I know it’s relevant to consider what the competition is, but sometimes I feel like we see these ratings every week and the first thing to follow is the excuse/reason why it doesn’t matter.

It’s up. Not down. And competition was stellar. Think glass half full

Well, yeah they only matter when the networks care about them and apparently they still do - hence THE WILDCARD

good thing they have that 4-6 week period during the summer when they only have to worry about MLB games on Monday.

Reigns got to patch the potholes left by his shield brethren.

He is a huge difference maker in the ratings. No one can deny that now