WWE Champion Bobby Lashley and Xavier Woods went one-on-one on Raw. Woods was able to score a victory over Lashley just six days out from Lashley defending the WWE Championship against Kofi Kingston at Money In The Bank.

At the conclusion of the show, MVP welcomed Lashley onto The V.I.P. Lounge but Lashley was not pleased with MVP’s way of dealing with the loss earlier on the show. Lashley tossed MVP’s set-up out of the ring and stated that it is time to get his edge back. He alerted Kingston that he’s in for the fight of his life come Money In The Bank.

Humberto Carrillo was scheduled to take on Sheamus for the United States Championship. Prior to the match, Sheamus ambushed Carrillo. The challenger insisted that the match continue as scheduled and Sheamus defeated Humberto in under a minute. Post-match, Sheamus attempted to continue his beat down of Carrillo but Damian Priest came in for the save.

How in gods name do you have Xavier Woods beating Bobby Lashley? That is absolutely absurd. I just dont understand it. Before Lashley won the title, this guy couldnt be beaten. Since he won the title, I can count at least 3 times that he’s been beaten and 2 of those were to Woods & Kingston, which he should never be pinned by those clowns.

To be fair, I’ve never heard anyone ever say Raw is better the AEW. Smackdown, sure, NXT, sure, but never Raw. It is 100% the worst wrestling show on TV.

For the record, I’m not saying SD or NXT are or are not better, I’m just saying what I’ve seen out there.

Smackdown is really just as bad. People(even myself) have given that show a HUGE pass, because everything with Roman has been so good. But in reality, if you look at the rest of the show, its also the same shit week in and week out.

There is absolutely no point in watching any of these shows, because nothing new ever happens. There is no stories outside of a few select talents. NXT is only slightly better and that is only because there arent as much rematches. Even that show, it just hasnt felt the same since the move to 2 hours. I used to come home from work and it was a must watch show. Now, I always read the spoilers and sometimes dont watch it until days later and always fast forward through it.

I dunno the way John summarizes the Viking Raiders stuff has me feeling like RAW is some sort of comedic goldmine. Not interesting enough for me to actually tune in and watch, but it does make for an entertaining podcast recap.

How in gods name do you have Xavier Woods beating Bobby Lashley? That is absolutely absurd. I just dont understand it. Before Lashley won the title, this guy couldnt be beaten. Since he won the title, I can count at least 3 times that he’s been beaten and 2 of those were to Woods & Kingston, which he should never be pinned by those clowns.

Not to give away that I actually watched the show last night, but they used it for something called character development. Something we constantly urge WWE to add to their program more consistently. And it left us with a better Lashley and Hurt Business after shedding some of the parts of the group we haven’t enjoyed recently. All for a feud that has been positively received over the last month. Weirdly, we spend so time yelling about WWE supposedly diminishing wins and losses down to something meaningless, but it sure seems to be striking a significant reaction here to something that doesn’t matter in the long run. And it mattered in the scheme of the program. So…cool?

Anyway, I’m glad people enjoy AEW. I don’t know why me enjoying one wrestling product has to disqualify me from finding some enjoyment out of other wrestling products, but to each their own.

For the record, Lashley has been pinned 3 times since Wrestlemania 36 (15 months ago) - Via Lana distraction to Drew. Via Drew distraction to Kofi. Via fluke to Woods. Buried.

I respect your opinion, and I am a firm believer that wrestling is subjective and people like what they like. I only tell people they are wrong when they talk in absolutes. If you think SD is bad, cool, I dont agree though.

Personally, SD is the show I most look forward to each week. Raw sucks, no reason to discuss it. NXT I dont watch every week, I typically just watch Takeovers.

Comparing AEW to SD is tough. What I mean by this is if you are asking me which show I would recommend to a person who is not a wrestling fan, it would be Dynamite. Between the adult themes, long term storytelling, believable characters, and ability to make things feel fresh, I agree on paper its the best wrestling show on TV. The turnoffs for Dynamite for me are I find way too much happens on each show, it by far takes me the longest to watch (it takes me longer to watch then Raw), and while I don’t mind mixing new talent with ex WWE guys, the ratio has gone a bit too far for my taste. My personal tipping point was Revolution, and more specifically Christians debut. I haven’t been as into the product since that show, it was a huge turn off for me, my worst show of the year.

SD IMO has the best story in all of wrestling with the Roman/Uso’ storyline. I enjoy the majority of the performers on the roster, from the aforementioned, to Edge, Cesaro, Bianca, Bayley, Rollins (in ring), Sammy, Owens, Big E etc. Despite some silly scripts, I feel that since the roster is so strong and the in-ring is so good that I can look past it. I know some look at the constant re-matches as a downside, and it is, but not me. While I get that what I’m about to say is not a good thing in the grand scheme of things, I hate watching any wrestling show for 2 hours, and the ability to fast forward through these re-matches increases my enjoyment of the show. I can usually finish SD in about just over an hour, which I can not stress how important that is to me. I wish all wrestling shows were 90min including commercials, and SD feels that way to me

“Character development” means shit in this company right now. It takes more than one episode to do anything of significance. And Xavier Woods is not the person you should be doing it with.

You think Brock Lesnar would ever lose to this fucking guy? Hell no. There are better options to tell this story. And how the hell are Lashley and the (non existant) Hurt Business any better after one show?

They’ve been telling this story for a month (really, since Kofi beat him two months ago). This was just the latest step in it. Great football teams drop games to bad teams plenty, so it’s not some unrealistic thing in the scheme of sports. The story had been that he had gone soft since winning the title, partying and vacationing too much. He and MVP denied it and laughed it off before it reached a breaking point, which losing to Xavier represented. Which now after Monday he’s shed the women, destroyed the MVP Lounge, and reached back into his killer instinct. His previous loss to Kofi pissed him off enough to go to a HIAC with an effort to rid Drew from his title reign. The Lana loss to Drew finally broke off his marriage and launched him into the Hurt Business angle. All of his losses for 15 months have meant something.

I don’t think it’s particularly helpful to criticize them for things that are working just because someone feels like hollering a bit.

For the record, Lashley has been pinned 3 times since Wrestlemania 36 (15 months ago) - Via Lana distraction to Drew. Via Drew distraction to Kofi. Via fluke to Woods. Buried.

Nah he lost to Riddle on that disastrous Legends Night too. There is no plan here, they’re just going week by week and making things up as they go along. He’s the champ until another old guy comes back that excites Vince

Yup, missed one. Still doesn’t even remotely move the needle from it being a consistent clear plan they’ve had for him since last year to whatever desired negative result you’re hoping for.

Yeah they are building up Lashley (kinda) for that big money match with the 54-year-old Goldberg.

If I’m supposed to believe the 2-match contract, that would leave quite a hole in the idea that he’s dropping it to Goldberg. 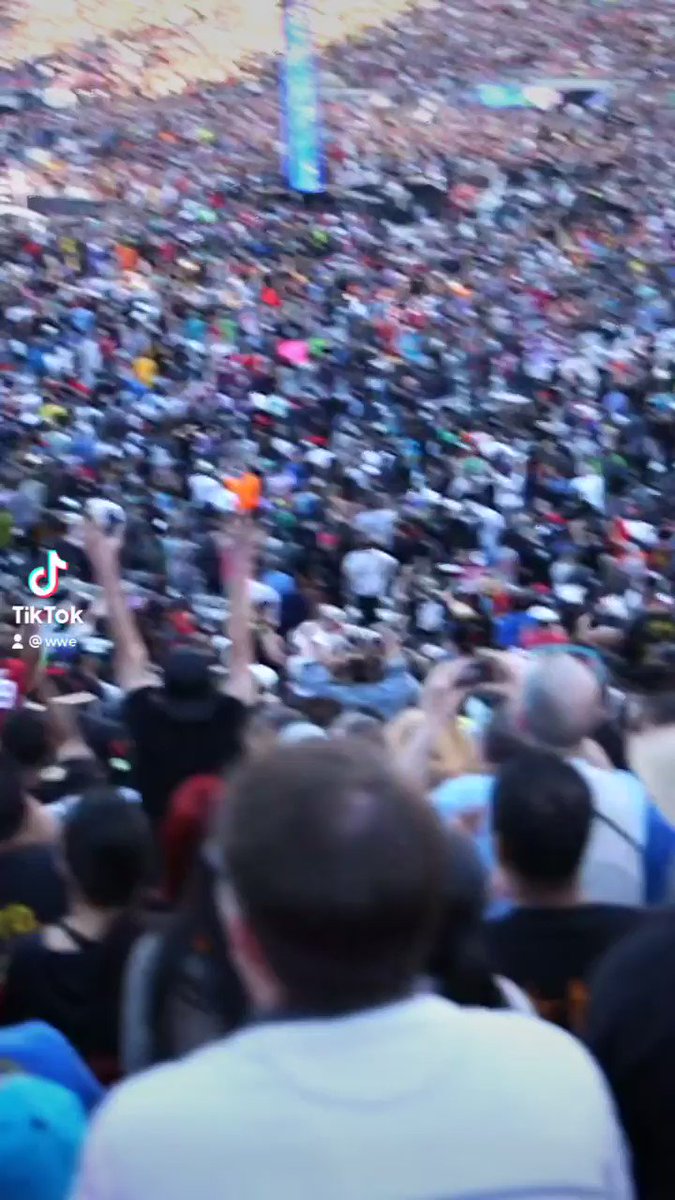 WWE really encouraging the best from their audience…

It’s the worst…and yet…somehow still tied for the worst with the “BOTH THESE GUYS” chant.

Man…what is everyone’s least favorite chant? Is it WHAT?

I actually don’t mind WHAT, it’s amusing to try and watch wrestlers combat it. Good test for someone on the mic.

The worst for me is “this is wrestling”, just annoying and lame.

Fight forever is the one that’s gotta go

Either they are pumping in some crowd noise, or this crowd is super fucking annoying. I feel like its being pumped in though. There is no way they are really going “OHHHH” every time something happens. Even when Finn extends his arms.

Anyone there live? I’m curious if the crowd is red hot or if it’s being piped in.

That pop for edge was incredible gave me chills.