On Thursday morning, World Wrestling Entertainment released their second-quarter earnings report with the message that despite many declines they are on target for a record year.

The company announced overall revenues of $268.9 million for the quarter, which included this year’s WrestleMania and Super Showdown event in Saudi Arabia. It’s an equal comparison to the second quarter of 2018, which featured the same shows. Overall, they were down year-over-year from $281.6 million. Net incomes for the quarter was $10.4 million compared to $10.0 in 2018 while also having a lower tax rate at 25% compared to 31% last year.

The company dedicated a lot of space to addressing their television declines. Their metrics revealed that Raw was down 14% year-over-year with SmackDown experiencing a drop of 11%. In the Key Performance Indicators report, it lists a similar decline of 14% for the USA Network overall but a more modest 8% drop among the top 25 cable networks.

WWE broke down their yearly declines by month with Raw down 21% in April, 8% in May, and 11% in June. SmackDown dropped 19% in April, 8% in May, and 7% in June. The company presented their case that the declines have subsided with reference to their viewership in June. Obviously, April is a rough month due to NBA and NHL playoff competition but also featured the night after WrestleMania and Superstar Shakeups, which were all down considerably from 2018, which would have faced the same sports competition.

The media division saw revenue of $197 million for the quarter, down slightly from $202.6 million that they explained was due to fewer episodes of certain reality series like Total Bellas. In the category of ‘Other’, which is where the money derived from the deal with Saudi Arabia is attached (although not broken down with a specific amount), the revenue was $57.3 million. The ‘Other’ section included scripted, reality, and other in-ring programming as well as theatrical and direct-to-home video releases. For comparison, in Q1 of 2019, this section had $9.4 million in revenue to emphasize what a difference-maker the Saudi Arabia shows are for the quarter.

Live attendance brought in $48.8 million in revenue, which was down 7%. They only ran 76 events this quarter compared to 90 in 2018 with 53 domestic shows and 23 international events.

There have been several cancelations of WWE events, including one this Friday that was set for Texarkana, Arkansas. With the implementation of the ‘Wild Card’ rule, it led to many Monday night house shows being removed but that should have helped the average given the struggle of drawing on Monday nights for the SmackDown crew. In the report, the WWE stated that “The average ticket price at these events increased 16% to $94.56 primarily due to changes in the mix of venues, but was offset by the staging of eight fewer events as the Company worked to optimize the profitability of its touring schedule”.

The Consumer Products division declined 13% with $26.7 million in revenue that they attributed to fewer sales on WWE Shop, lower royalties on toy products and running fewer live events in the quarter where venue merchandise would be affected.

We will have much more on the earnings reports and Thursday’s earnings call on the Café Hangout at 3 pm Eastern with our guest Brandon Howard from Wrestlenomics. You can watch the Hangout live if you are a Double Double, Iced Capp, or Espresso member of the POST Wrestling Café.

They smashed estimates and the stock is way up today. I made a good penny today on their options and I have now down the opposite and bought a long term sell on them based on this hype the pits were easy to snag for a good price

stock is way up today. 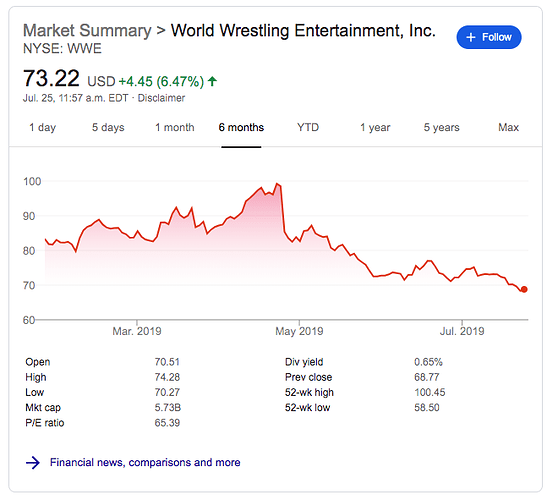 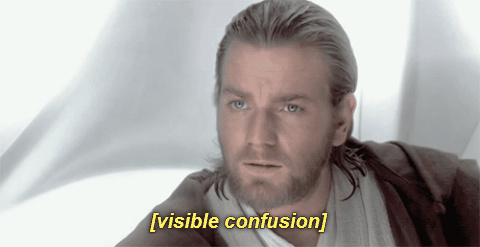 It’s up 6 percent today. You don’t see that?

45 percent on the options

Ha! I guess I was more confused with Google’s graph.

Vince not enjoying that AEW blood and gore crap.

Man what the hell is wrong with Vince’s voice?

Congrats to everyone who believed in the results today. Amazing stuff by WWE

Nobody ask Vince why he and alot of higher ups sold a bunch of stock yesterday?