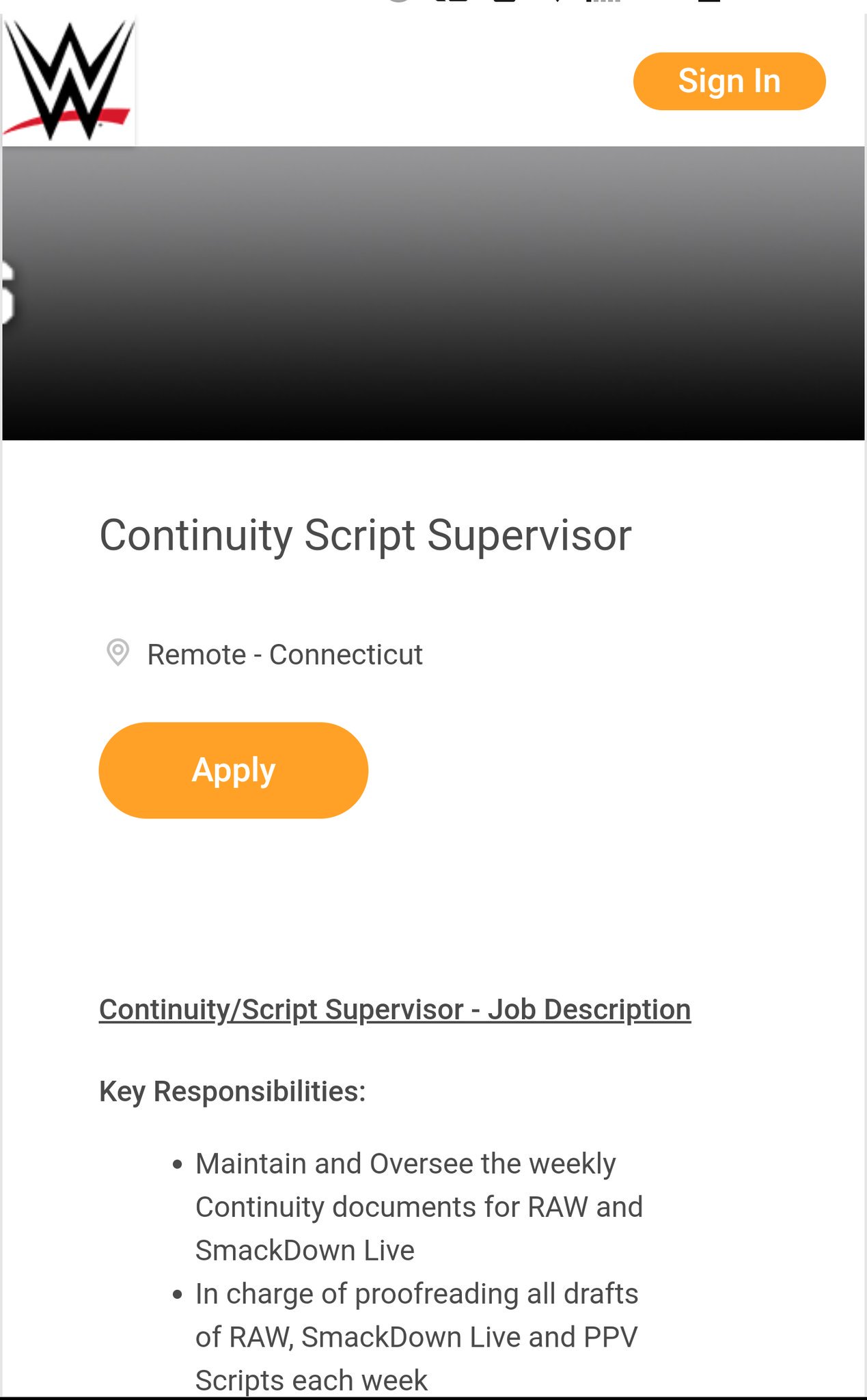 Two years ago, I stated in interviews that one of the great challenges of WWE was the lack of story continuity and the internal opinion that it "doesn't matter/ they won't remember/ they're not paying attention anyway". The company has now posted this job opening.

If you’ve ever dreamed of rapidly switching from whipping boy to scapegoat for what I’m going to assume is not much money for what they’re asking from you, you’re going to want to throw yourself all over this grenade.

I guess it’s a decent job if your current position rolling a boulder up a hill just isn’t challenging enough.

This job shouldn’t be that hard. Whether Vince or anyone listens is a different story but NXT has continuity. BTE has continuity. New Japan has continuity to the point booking often revolves around matchup records (get ready for a lot of Sanada is 0-5 vs Okada references).

In an interview with Vince Russo (yeah I know, hear me out) Jason Aaron pointed out the differences in wrestling from comics. And he brought up the lack of continuity in WWE.

I’ll take this job if only to get.screamed at by Vince McMahon…I have thick skin…I’ll be taking over Road Doggs spot in no time.

Yes. Either hire a continuity/script supervisor or just wait till the XFL starts and Vince gets distracted by shiny lights.

I don’t have any experience working with WWE but after 8 years making my living in film/tv, from the worst made-for-tv Lifetime garbage to Emmy award winning respected series, I can kind of tell when a job is going to be horrible just on how things are presented to prospective employees; my Spidey Sense is tingling here. This is a case where they are going to tell people, ‘hell you only need to work X number of hours a week, some of it from home, it’s not going to be that bad.’ But those, say, 60 hours of work are going to need to be done primarily in three days (Fri, Sat, Sun to get ready for Raw/SD after scripts have been written) and then add on constant revisions and reworkings to be had right up until SmackDown goes to camera. Then you’ll get questions and sent rough draft type material until Friday. You will basically be on call 24/7, without getting paid like it. Who knows, maybe this thing pays well over what I’m thinking and would be worth the shit you’d get. Might be worth it to a wrestling fan (they don’t want to hire this type of person), but for someone who has experience in this field of continuity/script super’ing (this is the type of person they want to hire), this is probably not worth the money for what they’re asking of the person.

For someone to be responsible for making sure, say, Show 1 and Show 2 (which exist in the same universe of story telling continuity) gets from their respective Points A’s to Point B’s without having illogical story gaps both within shows and as they relate to each other, is not a script super who is responsible for that but rather a show or series runner. This is the only person (theoretically, but sometimes actors/exec prod do as well) who has veto power over a director on a television set.

A script supers job is there to make sure that when the wide shot cuts in to the close-up there is nothing that visually stands out as wrong or that when scenes are shot out of order things make sense. For example; an interior shot of an actor walking thru a lobby of a building is shot in Week 2, when you go to shoot the exterior portion of him walking up to the building and entering in Week 3 on a cold day the actor says, ‘I want my coat and scarf in this scene’ and continuity will immediately chime in with ‘Sorry, but we’ve already shot you walking in and you didn’t have the coat or scarf on.’ Another thing is, ‘What line did I pick up on the drink on three takes ago? I know it was different’ or just ensuring actors do not flub dialogue in instances where it’s crucial to the story that a line be delivered to the word as it was written. They take notes on what takes of each shot were favored by important people (dir/dop/actor/prod). They make sure eyelines make sense, and that the camera does not unintentionally cross the axis (which in ‘live-action sports’ does not exist).

You know what they don’t do? Proof read scripts for typos. That is the writers job, and quite frankly no one who watches a show will ever see it’s script; who cares if it has a typo? As long as the thing resembles English closely enough that people who have to turn it from a script to a finished visual product understand it, typos are fine. I’ve seen plenty of typos on sides (often when a scene is re-written shortly before it’s shot), and never once has it been an issue that led to any sort of production delay or added expense. If an actor picks up a weird object, that is visually no different than them picking up a wierd (sic) object to the person at home eating popcorn and watching. Nobody on production side is going to think there is a new wrestler called Funn Balor inserted in to a backstage segment to deliver one line and then never be heard from or seen again because Finn’s name was wrong on a script. A continuity person telling a writer about a typo they noticed might be a courtesy they preform if they like the writer and don’t want them to look stupid (the crew does snicker when it happens) in front of people, but it’s not a responsibility they are expected to be preform as a job requirement. The only instance where I could see it falling under the job requirement of a script super is if the typo would lead to an art dept gaff that would be noticed by a viewer.

Just because WWE likes to pretend they’re not wrestling does not mean they can pretend they are a big motion picture company. They shouldn’t just appropriate our job titles and then give them tasks that make no sense in regard to their supposed position. Consider this; most normal humans want to take some time off to spend with family or go on vacation; maybe 3 weeks or maybe 8. Nobody wants to work 52 weeks a year, and script supervisory/continuity person in film/tv can chose between short and long format productions with as much or as little time off in between gigs that they want, if they have a good reputation.

NJPW doesn’t have the same problems that WWE has in regards to taking liberties with established stories or character traits because they have a really good continuity script supervisor working for them; it’s because their show runner (in wrestling, that’s basically a booker) is one person with a strong concept of where the ship is sailing to; they know what the plan is and in instances where a compromise has to made on the spot with little time to act, NJPW is in a better position to find a solution that ‘keeps continuity’ because of it.

NXT is another example of a show, constantly dealing with situations requiring last minute compromises, finding solutions that do not ask the audience to dismiss large portions of their prior experiences as non-canonical due to story telling issues. Gargano/Ciampa is a glaring exception here due to extraordinary circumstances. Like NJPW, NXT has one person in charge with a strong vision of where this ship is sailing to. That is HHH, showrunner/booker, working with his agents, who almost serve as both writers and directors, to follow a plan and find better compromises when they find themselves in a position where they are forced to shift gears.

A person might explain away to themselves an inconsistency here or there, but when it happens often enough it becomes hard to get invested even in a potentially intriguing story because you know it will lead to an absolute assault on your common sense and intelligence somewhere before the conclusion, or in the immediate aftermath. The WWE is a beast with too many heads; it cannot coordinate itself due to this problem. Every time they cut off one head they then willingly grow two more. They actually need to start firing a lot of people to fix their problem; not hire a bunch more.