WWF superstars on the WWE network

First of all, i’ve got to say that how happy i was when i found out that they finally added some WWF superstars episode on the network because this brought back so many memories for me as a fans. When those episode first aired, i was into my fifth years as a WWF fans and this show was like a religion for me. That’s pretty much the only show that aired in Montreal at the time so i would watch it on CTV montreal at noon then watch the american broadcast at 1 pm on NBC and then watch it again on CTV ottawa at 2 pm.

Yes , i knew that i was watching the same show three time but as i kid, i could cares less. I also remember when i first started watching this show in 1988, we had the french version also, so sometimes i would watch the show four times just because i was hooked by the product of the time. So to say that this brought back found memories of when i first started watching wrestling is a understatement.

So now as a adult watching these shows, i realize how the business as changes in the last 25 years. You look at a show like superstars, everything they aired on that show was to build up for house shows programs.

None of the feud, they had on the show actually made it to a tv or ppv match down the line. The ultimate warrior/papa shango feud was settle on the house show circuit and on one of the coliseum video release. the Beverly brothers vs LOD same thing. Slaughter vs mountie went the same thing. The was a big commercial for the live events at the time and most time when you had the right attraction it worked. Everybody look like a superstar because all the big names won on TV so when somebody like Koko B. ware wrestled against another superstar, you really thought he had a shoot at winning the match.

Now, it’s all about Network subscription and tv rights deal, the product takes a back seat to the money and fans really don’t get behind it as much as they use too. Nobody feel special because we see every combination of wrestlers multiple time on tv. The fun thing about the golden era was that you barely saw superstar vs superstar matches on tv. So when you got to the Big event, everything felt fresh, now they have so much content that you can’t really get existed about anything anymore.

Anyway, this was a long rant just to say how much i enjoy rewatching some of the show that made me a WWF/E fan for life and even if i don’t like the product as much as i use to back in the day, i still will continue to be loyal to WWE.

Releasing WWE Superstars episodes from 1992 was the best thing they’ve done with the Network in a long time. 1992 was such a strange transitional year for the WWF. The first few months of the year felt closer to the '80s era since you still have guys like Hogan and Piper in significant programs. The second half of the year you have an influx of fresh faces in the main event scene that didn’t have the traditional WWF look like Bret Hart, Shawn Michaels, and Razor Ramon.

Towards the end of 1992 you definitely could see the embryonic stages of the New Generation Era developing. Bret Hart and Shawn Michaels got to headline a freakin’ pay-per-view in 1992. You could also start to see a phasing out of the traditional steroid looking body types with Bulldog and Warrior both getting the boot, although Vince’s odd almost fetish-like fascination with the “USDA Grade A Prime Beef” would come back to haunt the company the next year with the Lex Luger mega push.

You also have performers in significantly pushed roles as mega heels that lasted for just a few months (see Nailz and Papa Shango). Nailz would be gone late in the year, and Papa Shango was still with the company in early 1993 but felt like an afterthought by then.

What an interesting time for the company that we now have a chance to take a deep dive into.

Best programme on the network, prove me wrong

Unfortunately, I wasn’t born yet when Superstars was around but I always had a huge interest and fascination 80s and 90s wrestling so the old archives are my favorite thing of the WWE Network. I just went back and watched the October 17, 1992 edition of Superstars after Bret Hart won his very first WWF Championship in Saskatoon and cut this very heartfelt promo. A lot of people don’t give Bret a lot of credit for his promos but I thought it was emotionally superb. That’s what missing in today’s wrestling where’s it so scripted to death, it’s just depressing. You had great performers like a young Shawn Michaels, before his rise to the top, and the British Bulldog showcasing their talent. Mr. Perfect, Curt Hennig was Vince’s color commentator and I really enjoyed it. He was so biased of his love for Ric Flair but always so entertaining, pretty much Heenan’s back-up. 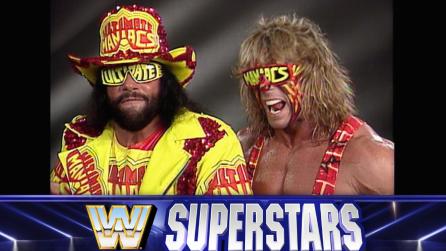 Watch every WWE, ECW, and WCW Pay-Per-View like WrestleMania and Royal Rumble, plus original WWE programming right now on demand!