On Monday, the XFL announced its television deals for its inaugural 2020 season. Beginning Saturday, February 8, 2020 (six days following Super Bowl LIV), the XFL will air weekly on broadcast networks ABC and Fox, as well as its cable affiliates ESPN, ESPN2, FS1 and FS2.

The Wall Street Journal added details in their report, indicating a three-year term for the deal with Disney and Fox covering production costs for the events while keeping TV advertising inventory. The XFL will maintain its ability to sell sponsorships.

CAA Sports and Evolution Media Capital (EMC) are credited for negotiating the deals on behalf of the XFL. CAA were also responsible for helping WWE land their monumental 2018 deals with NBCUniversal and Fox.

A full schedule for the 2020 season accompanied the XFL’s press release, concluding with two playoff games the weekend of April 18th and 19th and a championship game on Sunday, April 26th set to air on ESPN. 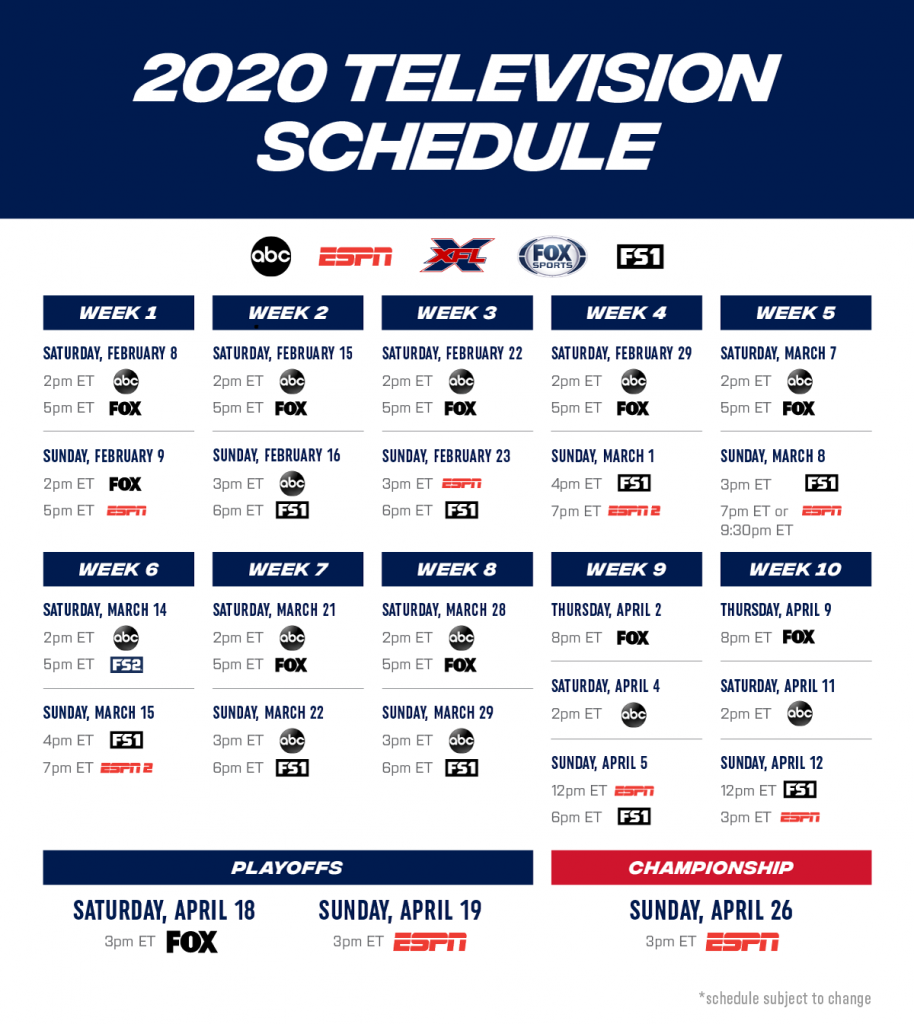 Wow, being on Fox, ABC, and ESPN is huge. That’s way better than the TV deal that the AAFL got. I wonder if Fox will give them the big name commentators like Aikman and Buck.

How about Teem schedules?

All told, about as good a deal as could be expected.

The tv deals guarantee them at least one full season. Anything more than that is on the XFL management.

It’s a great get by Vince, but if management isn’t on point (or if the appetite for off-season football remains static); it doesn’t automatically mean success.

Agreed, but it would give the XFL a big game feel if he called some of their games.

You guys are crazy. Joe Buck is one of the best in my opinion. He’s got the perfect voice for making that legendary championship winning call.

Better not black out these games in Canada.

Vince out smart and totally out flanked AAF. Rushed press conference forced AAF and they took the bait and fell flat on their face. His pivot needs to be negotiating with the NFL as the developmental. That cements the leagues future for years IMO.

I lost all respect for Buck when he was “disgusted” by Randy Moss pretend mooning a crowd. He’s a tool

I have to admit I’ll be watching the XFL. Hopefully Toronto gets a team!

This feel like disney & fox testing the water to see if they can work with vince and maybe someday one of them might offer a deal that vince can’t refuse to sell WWE.

I’d rather they die than go to Disney…you think WWE rely on nostalgia…not even close to Disney.

but it could happen, they pretty much bought everything else that’s big in entertainment and with that Avengers: endgame money, they could pretty buy WWE any time they want.

But it’s already dead in WWE so would be a big change.

If people think the Saudi Arabia shows are relient on old acts…prepare for rebooted Undertaker’s and Steve Austin’s.

I’m wondering if they’ll adopt some of the WWE tropes. Like every game starts with a 30 minute monologue in the middle of the field. One team’s starting quarterback goes out and talks for 10 minutes, then gets interrupted by the other teams quarterback. Or will they have contract signings that end with someone going through a table every single time…