XFL one week away!

All I’m seeing are positive reviews for it on twitter. It seems the XFL is about to revolutionise American Football just by existing.

I caught the first 3 quarters of the inaugural game, and it was a pretty enjoyable and fun watch! I was also surprised at how loud the DC crowd was. I read online that over 17,000 people showed up. There was a moment when a player dropped an F-bomb in a sideline interview on live TV. I wonder if Vince flipped out at that. It’s still early, but I feel like the on field product is revolutionary and enjoyable enough to at least last for a little while.

yeah, i had fun watching one game yesterday too! It was just some good ol football! Fun stuff and pretty lively. A neat alternative!

Barring a catastrophic collapse next week, I think the league will be sustainable for a couple seasons before ultimately folding or (more likely), forming a partnership with the NFL.

Both the Betting industry and TV partners are leaning really heavily into the sports gambling aspect. Let’s face it, Networks need content and Live sports seem better equipped than others. Add the hook of gambling which is treated as a dirty secret of the NFL and this has legs. More than ratings I’ll be curious what the gambling data shows.

Amazing that XFL draws higher ratings in a worse time slot than wrestling lol. Shows you how unpopular in general wrestling has become

The XFL’s debut rating in 2001 nearly doubled the usual Raw rating then (which can’t really be characterized as a down period), so I’m not sure comparing the two now to make a statement about the current wrestling atmosphere really works.

Give it some time Smackdown Premier drew more than 3.3 million, so see where it is in a month.

If they can get fantasy going it would be huge for them.

Bumping this thread. 2 weeks in, what are everybody’s impressions of the XFL so far? Anyone have a favorite team yet?

I like the transparency of the replay reviews, the experimentation with kickoffs/point after TD’s, and the sideline interviews. The quality of the football feels a little off though, especially with QB play. However, the crowds are still getting into the game and giving them a “big game” feel. Being on major networks with known play-by-play guys calling the games helps too.

PJ Walker will rightly be on an NFL roster next season. That’s my main takeaway.

PJ Walker is good! So far the Houston team is my favorite so far. And I think Cam Phillips has looked amazing and could find his way back to NFL if he balls all season. Also hoping St Louis can keep winning and fill the home stands since they lost the Rams awhile back. Its gonna be tough time getting my live viewing attention competing with NBA games & March Maddness on the horizon.

The XFL’s most successful market so far seems to be St. Louis. Their first home game drew around 29,000 and did an 8.0 local rating. That’s really impressive for a startup team. This league so far has just been really fun. The Vipers/Roughnecks game this week was a back and forth high-scoring battle that kept me entertained throughout. Sure, some other games have been blowouts and filled with bad QB play but in the NFL you can get that too.

This pass by Walker last week was incredible. 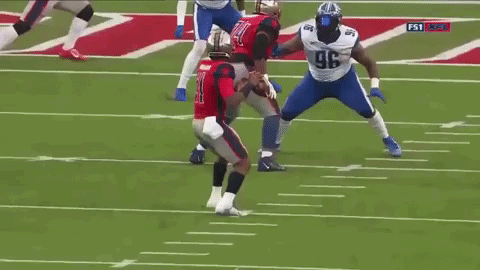 I wouldn’t be surprised if he’s back in the NFL by the fall.

The Houston Screwjob has taken place.

Officials running off the field and saying the game is over, when Seattle should have gotten the ball with 2 or 3 seconds left.

Even the commentators were ripping them.