All Elite Wrestling (AEW) and the Owen Hart Foundation have announced a partnership that will see the late performer honored.

A press release was issued on Monday announcing that the collaboration will include an annual Owen Hart Cup Tournament with the winner receiving a trophy that will be named “The Owen”.

The partnership will also feature the production and distribution of Owen Hart merchandise and will include AEW’s upcoming video game, action figures, and other merchandise.

All Elite Wrestling (AEW) and The Owen Hart Foundation (OHF), a nonprofit charity which provides a vast range of assistance and opportunities to individuals in-need across the world, are collaborating to honor the legacy of late wrestler Owen Hart, a beloved figure in the professional wrestling community and beyond. This collaboration includes launching the annual Owen Hart Cup Tournament within AEW, which will see the winner receive a Cup known as “The Owen,” as well as the production and distribution of unique and original Owen Hart merchandise, including specified retail goods as well as the upcoming AEW console video game.

“AEW’s relationship with the Hart family dates back to our inaugural pay-per-view event, Double or Nothing in 2019, and Owen’s influence is still felt today,” said Tony Khan, AEW CEO, GM and Head of Creative. “To extend his memory and his legacy even further through this agreement is a powerful and meaningful moment for the entire wrestling community.”

“The Owen Hart Foundation is extremely pleased to partner with AEW in this wonderful joint venture to honor Owen’s substantial international wrestling career and the lasting influence he and his craft has had in the sport. AEW’s Owen Hart Cup Tournament serves as a tremendous tribute to Owen and provides an incredible way for professional wrestling enthusiasts to celebrate his work in a most fitting way. We trust that Tony Khan and his amazing AEW team will do a brilliant job with this highly anticipated project. This OHF/AEW partnership is my special gift to all of Owen’s magnificent loyal fans who forever remember him and his inspiring repertoire of talents.”

This is pretty cool. I was kind of hoping the memorial tournament would be given to Brodie Lee.

Incredible. This company does so much right. Love that Owens legacy can live on in this way

I was kind of hoping the memorial tournament would be given to Brodie Lee.

I think they’ll go with a Brodie memorial show, instead of a tournament.

I think they still can. I dont think anyone thought twice about the fact that NXT did the Dusty Classic as well as the Mae Young Classic. Make one for the woman, one for the men, or you could do one for the tag division etc. I think fans will be happy.

Really cool that they are doing this. I get why Martha doesn’t want any affiliation with WWE, and I also get why fans want Owen to be remembered, so its cool that another mainstream option has emerged to do so.

Yup. If it hasn’t already, this will surely turn into AEW vs WWE bullshit with the extreme WWE fans bashing Martha and Owen.

How long until WWE has the British Bulldog Memorial Tournament?

Speaking of the British Bulldog, where the hell is Davey Boy Smith Jr?

Most of the takes aren’t so much WWE vs AEW, it’s all about how awful Martha Hart is for now letting WWE celebrate Owen, etc. I’ve seen people posting that Owen would have wanted the show to go on after his death, and that it should be more important what the rest of the Harts want… 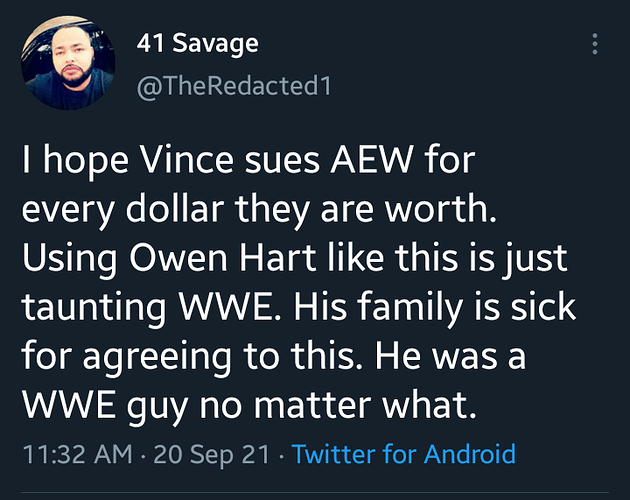 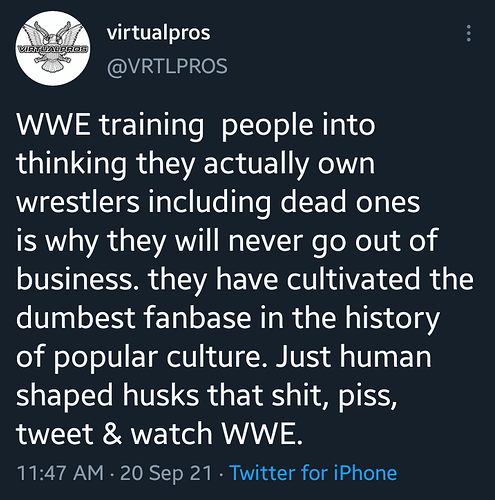 It all comes from the same place, extreme fandom. I dont want to derail this thread as I feel this thread should be about a positive thing, so in this thread at least I’m done talking about this after this post.

Extreme fandom just brings out the worst in people, and quite frankly I’m sick of it. AEW can’t just do something nice without fans of WWE saying dumb shit like this savage guy, and at the same time on twitter/tik tok etc. every thread I see somehow gets derailed and spun into anti WWE rhetoric. While I agree with the second tweet you posted about fans like the guy above, its pretty shitty to call an entire fan base the dumbest fanbase in history", I think John Pollock said it best when he said (and I’m paraphrasing) “anytime you label anything in absolutes, its not a good idea”, this is exactly why are world is so fucked up now a days, people dismissing an entire group of people because of a few idiots.

And for the record, anyone who reads this please know that this isnt a shot at @MarkP, its a shot at the idiots on Twitter/Tik Tok etc.

So to try to move back to a positive direction, for the tournament I would find it interesting if they did it as a younger guys bracket and an veteran bracket to have that clash in the finals. Thoughts about another way they could set up this thing, and how many guys would you put in this?

I was having a crap day at work today, so seeing this news did bring a smile to my face knowing that wrestling can do a lot of good when it has the chance to.

I like that a lot. Then ideally in the finals you have a vet (say Jericho), and a younger guy (say Sammy G), square off in a kick ass match with a mutual respect angle at the end. I think that could really be a cool moment. Hopefully they can get Bret involved, but I’m not sure what the relationship is between Bret-Martha.

I’m sorry for posting the above. I was just trying to show how extreme some of the fans who are knocking this idea are.

This is an amazing agreement to celebrate Owen. I really hope we see Bret involved in some way as well.

No worries, its not like its not out there.

In a best case scenario, I’d like Bret, Martha, and the kids to be able to present the winner with something. I’m not sure about that even being a possibility, but it would be nice to see a family most of us 35+ looked up to growing up come full circle after all the ugliness to honor Owen.

This may be a dumb idea but I got a chuckle hearing it on WOR. Considering Owen was to be a known joker, the first trophy could have a broken handle or something as a way to honour his sense of humour.

Also if I was a betting person, I could see Pillman Jr. winning the first one.

Any details about who is in the tournament? Perhaps a “Forbidden Door” tournament would be cool.