So does AEW join everyone else in Tampa for Mania weekend or do they go on their own and try to hold another event somewhere else? Or will AEW treat it as a normal week and not do anything but a show on Wednesday night?

Cody has said before they will not do a show during Wrestlemania weekend. 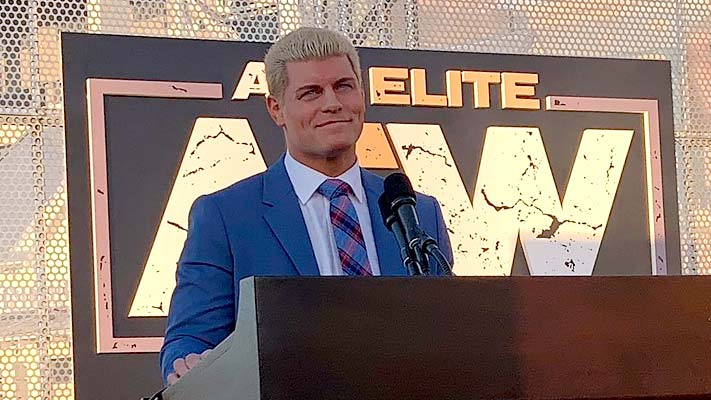 For fans hoping to attend an AEW (All Elite Wrestling) show during a future WrestleMania weekend, Cody Rhodes has addressed that possibility.

So no I don’t expect them to be in Tampa running a house-show or a taping next April.

If I were them I would avoid doing anything that weekend. I think if you are them you want to be separate and not piggy backing on Mania. They would be going head to head with NXT takeover for fans, and Mania it self of PPV buys as many people would not watch both that weekend. Better for them to host their own major event some other time.

Better question. Once they work out partnerships do they run their own Stadium show in Jacksonville rent free, and then lease out Daily’s Place to other promotions at reduced cost to create a week long “wrestling festival” that directly competes with a Mania weekend. Let’s be honest, the biggest draw to the traveling fan is multiple shows that weekend and if AEW can use their resources to create that I think it would be an incredible rival.How do you get other promotions to join in, simple - give them free rent at Dailys Place for their shows the week before.

Would you rather go to a Mania weekend where there are other shows all around the host city, WWE events, Axxess and the climax is Mania on Sunday or would you rather go to an AEW hosted weekend where there are other shows at Dailys Place (perhaps partner shows with New Japan or AAA if they work out deals), Starrcast, and the climax is a Stadium show with a mix of talent where the Jaguars play.

Yeah they should just let WWE have that weekend. No point competing.

That’s a great question. As fans, I’d say most of us would prefer this because it seems more inclusive to the industry. Remember how ppl reacted when WWE tried to sabotage the MSG show. They have a great opportunity to takeover the Summer, because SummerSlam isn’t really as major as it used to be.

Then the question is - Does WWE try to counter that or let AEW build this huge weekend with all of that publicity.

Thanks for this! Didn’t think they mentioned it before.

@WillMarelle
I’m not sure how WWE could possibly counter AEW if AEW decided to give a rent-free venue to AAA, NJPW, maybe even ROH/NWA/MLW, and then stack a mega show at TIAA Bank Field.
Yes, crazy as it sounds, do we have any reason to believe the EPs when they claim they want to work with everyone? And TK has the money and facilities to basically cut these rent-free deals and own an entire weekend while simultaneously changing the wrestling business for the better, collaborating, and putting WWE on its heels against everyone.

I mean as long as WWE is the A show, it could counter simply by going more main stream with its attractions. Bring back some of its legends etc. For instance if they booked a match with say Stone Cold I think that might out draw anything AEW could put on. It might lose some hard core fans but those other shows congregate around Mania far more because they benefit from the WWE draw then the other way around (not that it doesn’t help WWE, but I think WWE drawing in the 60+ thousand fans helps those little guys way more. As of yet AEW has not proven they have that drawing power.

AEW would be better served doing what you suggest at some other time of year, rather than going head to head. That might force some people to pick one or the other due to money, but would likely just be a bigger weekend for AEW.

@Breng77 maybe I was not clear but I absolutely meant to do it another week in the year. NOT Mania weekend. I think if they organized something, with announced shows with other promotions in advance I think it would draw globally, and remember, no rent!

And yes, bringing back Austin, or Edge, or booking Rock for a match would be a trump card to play, but would they clear guys or take the risk just to do it, and would those talent even be interested? IF AEW tried to organize a real collaborative weekend, I don’t think there is a damn thing WWE could do to counter-program, and in fact, I think they’d been taking a huge L that the entire industry has got together collectively for the fans, and WWE sits in its own (albeit, bigger) sandbox.

I think they would counter program with Mania, trying to make it the more attractive “wrestling weekend”. There is nothing they could do to attract the hard core wrestling audience from and AEW/NJPW weekend.

Oh - you mean, just upping the ante with Mania?

If they are on two separate weeks, are they banking that they can build Mania to be bigger than it is already? Let’s say fans plan on traveling to one major weekend a year for tons of shows. A properly organized, collaborative weekend by AEW & others vs. Mania would be very interesting. I think the traveling fan is more the hardcore fan, interested in seeing multiple promotions and shows. This is all pie-in-the-sky because it would take such incredible collaboration, but it’s totally feasible and TK is the right person to pull it off given they own the venues.

I would love to see Mania become 1 of 2 major weekends and see just how it stacks up against the rest of the wrestling world when fans had to choose which weekend to travel to.