Jon Huber, known as “Brodie Lee” and “Luke Harper” passed away over the weekend and this coming Wednesday on AEW Dynamite, the company is going to honor him. AEW was scheduled to present night one of their ‘New Year’s Smash’ show that has an AEW World Title and AEW Women’s World Championship match on the card. Night one of that show is being moved to the first Dynamite of 2021 and night two will take place the following week.

Tony Khan announced the match lineup for the 12/30 episode of Dynamite and it’s listed as followed:

This Wednesday on #AEWDynamite, we’ll celebrate the life of Jon Huber (Mr. Brodie Lee) with a show including tributes and a special card of matches dedicated to The Exalted One. This night is intended to honor Jon, but also this is for Amanda, and their sons Brodie (-1) & Nolan.

#AEW New Year’s Smash will now take place across the first 2 weeks of 2021, on January 6 + January 13 on @tntdrama. I’ll announce the card for this week’s #AEWDynamite Celebration of Mr. Brodie Lee’s Life in a moment. Thank you to all who have shared their love for Jon this week.

There’s a write-up about Brodie on the POST Wrestling site which can be read at this link and here is POST’s audio news update about the passing of Brodie and Danny Hodge.

It’s the right thing to do. A nice gesture by Tony Khan and everyone at AEW.

Makes sense as it would’ve been weird for them to have their planned new year’s celebration right after one of their key wrestlers died.

If we were to just talk about the card though, it’s not great. Understandable as they are having to change things last minute but why all the tag matches?

My uneducated guess is that it’s about getting the entire Dark Order on the card but still leaving time for other segments.

This is the right move, you can’t go business as usual just a few days after one of your top stars pass away in the prime of their career.

What’s going on chief. To answer your question, it’s all tag matches because Brodie Lee’s son essentially put together the show. Tony Khan let him select his favorites to be on Dynamite. I’m sure they made some adjustments but he put it together. Cody, Orange and 10 are Brodie Jr.'s top three favorites in AEW so that’s why they are teaming.

Let me ask you guys something: if Brodie Lee was still in WWE, and died, would they do a Luke Harper tribute show like they did to Benoit and Guerrero?

I think the answer would be “no.”

I may be a WWE mark, but I think it’s a good thing that AEW care enough to put him there.

Now, another question: if it was Jungle Boy (though I seriously hope he won’t be dead for a while), would they be doing a tribute show on him just as they are doing with Brodie Lee? Unfair world, wouldn’t you agree?

My point: I take nothing from Jon Huber but God couldn’t have picked a better way to pay tribute to Jon Huber. Huber is lucky to have gone this way and I am happy for him. I should be sad like the others, but I’m not.

I think both WWE and AEW would do a tribute show if an active performer died regardless of of their spot on the card.

What do you mean Lee was lucky? He’s lucky he died by a lung infection?

I was saying that he was lucky that he was recognised and that AEW did make a tribute show.

I would never say he was lucky that he died of a lung infection or any ailment. That’s terrible, and far from what I meant.

Let me ask you something, kliq, besides a ten-bell salute, a standing crowd, and a show of respect from wrestlers of Rowdy Roddy Piper, did they make a tribute show to the magnitude of Eddie Guerrero, Owen Hart, or Chris Benoit? WWE didn’t even acknowledge Tom Zenk; it was as if he never existed in the first place. At first, even Rude was not acknowledged as he left the WWF in 1997 to join WCW. Brian Pillman: though not wiped from history, his memory was mishandled at the night after Bad Blood. Need I go on?

People know Huber from ROH, WWE, and AEW, but for people who don’t know about Dragon Gate, the reference would go over the fans’ heads.

And still, I doubt WWE would make a tribute show like what AEW did. This is why I thought Huber was the luckiest. He may have been recognised in WWE’s website, but they won’t give him a proper tribute.

Just to clarify, Huber’s memory was best handled by AEW.

Understood in regards to the “he’s lucky” comment. I wasn’t sure what you meant, that’s why I asked.

I’m not sure I get your point though about the tribute show. Benoit, Guerrero, and Hart were all active performers with WWE at the time of their passing. If Huber was an active performer I would expect the same based on that past precedent. What they did or didn’t do for Tom Zenk has nothing to do with how they handle someone on the main roster.

You have a point there.

A side point: I don’t see Huber’s name mentioned anywhere in the Dragon Gate site. He was there at one time, wasn’t he?

Nothing to be alarmed about, just a funny observation. 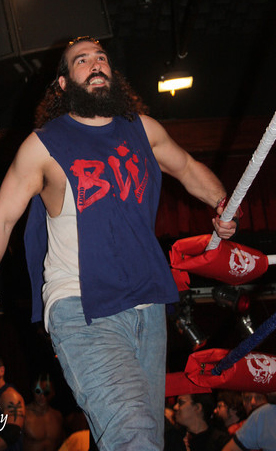 Jonathan Huber (December 16, 1979December 26, 2020) was an American professional wrestler and actor who work on the independent circuit under his former ring name Brodie Lee, most notably in Chikara and Squared Circle Wrestling (2CW). On a national...