AEW on TSN in Canada?

TSN does need more content because Sportsnet has been dominating the sports broadcasting landscape in Canada. 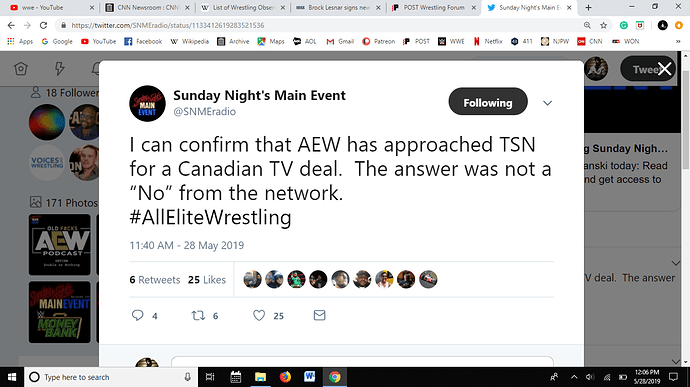 yeah, jason talked about it on the last edition of SNME. He pretty much mention that TSN is open to the idea and his listening to what they have to say.

The fact is TSN as been very leery of pro wrestling since they drop WWE in early 2000’s. AEW does need somebody in Canada to air their programming and it’s between TSN and The fight network at this point so if i’m them, i would try to do everything in my power to convince TSN to get air the show as it would get a lot more exposure on TSN.

TSN definitely makes the most sense.

Fight Network owns Impact so there’s probably a lot of conflicts with that.

Fight Network is so shit now that they lost the UFC package and cancelled the news division. Just all clutter of random MMA and boxing matches.

The purchase of TNA Impact really is a mind blowing one and the domino effect is pretty wild. The total destruction of The Fight Network. Billy Corgan investing in NWA. The creation of POST Wrestling. Fascinating stuff.

Why couldn’t sportsnet carry it? Is there an exclusive contract with the WWE?

It’s possible, they have a long-term committment with Sportsnet considering Rogers distributes WWE Network over there.

I’m not sure AEW would be huge in Canada. I know ECW and even WCW struggled with ratings here. It’s a lot of WWE love in Canada

Not even with Jericho and Omega? Two of their biggest stars who are Canadian?

It’s possible I don’t know. Why did WCW not get ratings here ? They had lots of Canadian guys too and WWE was beating them
Even when it wasn’t close in the US. Plus I doubt AEW comes to Canada to do shows (in Toronto and Montreal I’m sure they can’t book ACC or Bell centre bc of WWE).

WCW had Chris benoit, chris Jericho and Bret Hart and had trouble getting ratings in canada so i don’t know how big Jericho’s and Omega’s star power is in canada especially since they barely wrestled here anymore.

From what i’m know and it might have change since then but WWE signs a exclusivity deal with the bell centre years ago. I remember back when WCW was still alive, they couldn’t run the building unless it was under the disguise of a local wrestling event and they had Jacques Rougeau Jr. promote a local wrestling event at the bell centre where you had a lot of WCW talents on the card as well. So i don’t know if WWE could stop AEW from running the bell centre but i wouldn’t be surprise that they could do it like they did with WCW back in the day.

Also, i don’t know how big AEW would be in Montreal, Especially since they don’t have anybody from the province on the roster. Montreal is still one of the WWE stronghold because of Owens and Zayn. I could see them running a smaller building like the auditorium which will hold around 5 000 peoples when they finish renovating it but outside of that i don’t see them running montreal,

maybe Toronto since it’s a bigger market then Montreal and they could easily get 10 000 fans if not more for a show but even then and i’m sure they could run the scotiabank arena since WCW did run shows there back in the day.

You might be right about the ACC - but it’s been years and With summerslam coming this year I am not sure if they signed something keeping AEW out. Wouldn’t surprise me.

Was AEW even a thing when the contract was signed?
And, since its wrestling, do they have to put someone through a table after the contract is signed?

WWE has a great relationship with Rogers. Not really a bridge worth burning?

WWE is definitely #1 in Canada, but I’m sure there has been the same amount of burnout and dissatisfaction with the product as in the states.

Also, it’s not really fair to compare WCW ratings to WWF back in the day in Canada. TSN didn’t air Nitro till Wednesday, and never really made the show a priority. And WWF was in its hottest period ever.

I could see AEW running shows in Canada at some point, they basically have to run Winnipeg as long as they have both Omega and Jericho.

They wouldn’t need to book the Bell Centre. They can look at smaller venues. Something like Bell Place in Laval (where the Habs’ AHL affiliate are playing). As for drawing people and not having a lot of local faces, this changes here now that they signed Super Smash Bros (or whatever they’re gonna be called in AEW going forward). Plus, nothing prevents them from booking local talents for that show in Montreal. There’s PLENTY of good workers that could fit AEW’s style.

As for the possibility of airing on TSN, now that they got 5 feeds, it’s no longer a puzzle for them to really figure out where to slot them in their schedule. I wouldn’t be surprised if it ends up on TSN2. Still, I’m keeping my fingers crossed they get that deal with TSN and it would make sense considering they’re the network that aired the Kenny Omega doc in March.

IIRC, Nitro aired Wednesdays afternoon at 3 PM or 4 PM on TSN while RAW had the prime time slot. And the re-runs were often at impossible hours. WCW pretty much got shafted with their timeslots for Nitro. I’m sure they almost had better ratings when they aired WCW Worldwide or Saturday Night Saturdays at 5 PM on CFCF 12.

I remember that period, they got that timeslot when wwe decided to not resign their tv deal with ctv and wcw got the deal, at fiirst they would air worldwide before changing it and would air a one hour version of nitro before ctv decided to just drop wrestling on saturday.

No, they first started airing Worldwide and then, they switched to Nitro. They eventually showed a 1-hour version of Thunder and in the end, they aired WCW Saturday Night. CFCF 12 didn’t drop WCW until early 2000. At one point, CFCF was airing WWF programming at noon and WCW at 5 PM on Saturdays.