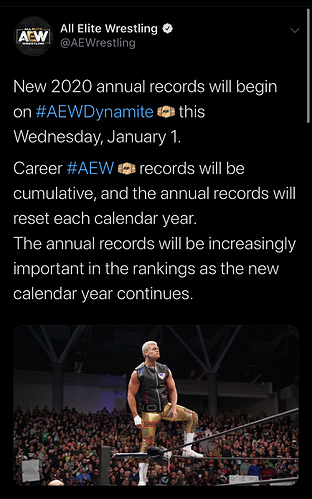 Some fans on Twitter are calling this saving themselves out of bad booking - but I actually am good with this approach to win/loss. Even if so - I’m glad to see AEW attempt to make some changes to improve their product vs. digging their heels into the ground like we’ve seen from other companies.

Even if it is “saving themselves” out of booking decisions - what’s wrong with that? That’s what good bookers do - tell a story and if necessary, change plans according to how a story progresses once it is presented to the audience, based on reactions.

I think the issue is doing it right now as records have barely been established. I always knew they would reset them I just figured they would start the “ season” after day All Out or some other PPV rather than the beginning of the year. It is disappointing for them just using the year change as there is really no culmination to the “season” in that case and with no PPV to end the year it kind of means wins and losses after Full Gear don’t really count. So it really does seem like kind of a cop out of their 50-50 booking thus far. I mean outside the Women’s division the records haven’t really seemed to matter.

Agree with those who say there should be a more “intentional” cut off. What did the guy with the best record of 2019 win? Should be an automatic world title shot or something.

Obviously this could all be different in the future, but for all the pre-launch hype about records and wins and losses mattering, this is a bit of an anticlimactic start to the process.

When you consider there is no off season, or any actual season, then the start of the year seems like a natural time to reset the records.
Fueds will continue. Pushes will continue. It’s not like people forget what happened to them last season in any sport…

I still find the rankings to be pointless. They add absolutely nothing to me. Scorpio Sky getting his title shot was fun and a good way to do it. Moxley has been on top with no mention of a title shot happening yet. Never thought I’d agree with Vince Russo but when he said “rankings don’t matter in a fake sport” it was spot on to me. Just give me a good story and good wrestling. The added element of the rankings mean nothing to me.

It isn’t a natural time when you have quarterly PPVs though as unless best record at the end of the year matter for something what is the point of wins after the last PPV of the year? Bulking out your overall record? They could absolutely have “seasons” based around their PPV year. Too me this feels too early in the show for this to happen. If they were going to reset at year end it should have been for 2021 and skipped this year.

I have no problem with it but next year they need to address it by having some sort of big year end event in December. Otherwise that entire month will be pointless

Or the first Dynamite of the year could annually be the big blow off.

Let’s not forget when AEW was initially announced. The new years day episode of BTE when the count down reached zero.

I like the idea of the persons or people who finish
atop the ratings come the end of the year get their title shots on the first Dynamite of the new year. Especially if they’re going to continue taking a break over the holidays it would give them a big show to promote & advertise their return.

I pay zero attention to these records. It’s wrestling, it’ll always come down to people wanting to see the wrestlers that are most over. Wins and losses can help get wrestlers over but sometimes the wrestler you’re trying to push won’t get over, what do you do then? Still put them in a big title match even though no one’s interested?

I don’t think it was that well thought out and even they didn’t give these records much respect. It gets in the way a lot more than actually improving the product. Can’t see them admitting defeat and getting rid of it though, so I guess this convoluted system that makes it more difficult for them and doesn’t add much to the product is the way forward…

The answer is you have them to another top guy who is over. There are very few talents who are super over that lose all the time. Unless you are having title defenses all the time, you can push people have them rise up the rankings, but if they don’t get over have them lose to the upper echelon of stars. The real issue with the rankings is the lack of squash matches to pad records. If top guys face other top guys it hurts their records. That is why the rankings aren’t 100% record based.

But no matches occurred until April, and regular matches didn’t occur until October. If they have big shows coming into the new year this will work, otherwise it does come off as a cop out.

Moxley has been on top with no mention of a title shot happening yet.

Wait what? That is the current story for Mox and Jericho. It’s been going on 2 weeks, maybe even 3. They have referenced Mox not losing in singles so far in AEW (only having the Tie with PAC)

I’d like more Dynamite matches featuring guys wrestling to improve their standings. Like #3 v #4 or even guys facing off to crack the top 5. With no secondary belt I think that’s a good way to showcase Midcard guys.

Yeah that was poor word usage on my part due to lack of sleep lol. So correct me if I’m wrong but have they actually announced the title match or just Mox is top contender? I tend to watch while my daughter is falling asleep so there isnt much volume and I skip to the actual wrestling.

I do like the idea of matches promoted to increase ranking. Like if Jungle Boy is #3 and is wrestling Guevara who is unranked it could be promoted Guevara will be the new #3. Just that little bit of hype to make the rankings worth the time.

It doesn’t seem like they’re addressing him as a contender but more like they are building to the match with Moxley racking up wins. No matter how much Jericho runs he can’t avoid Moxley. I assume they announce plant the seeds or even announce the match on the next Dynamite.

My understanding of the story is Mox is coming for Jericho. Jericho is trying to convince Mox to join his Inner Circle and not be against them. They are teasing Mox’s decision on Jan 1 I think.

Separately, it might be a problem that I have to say “my understanding”…are they doing too much via twitter and other socials to push story? Because I don’t think they’ve announced anything beyond Mox is #1 currently and the part about Jericho trying to convince him to join

Don’t dislike the idea, but they missed an opportunity to use this by having the annual records mean something - could have top 4 or 8 advance to a tournament that plays out on dynamite in Jan/Feb with the winners of each division getting title shots.