Would she have the position she currently has in the WWE if she was not Ric Flair’s daughter. I am not saying she might not be working indies but does her ability rate her to be where she is?

I was more thinking poor girl … doesn’t get to be in the first rumble or the first chamber!

You can ask this question for any second-generation wrestler. I don’t think Charlotte is the best female wrestler in the company, but she’s up there. When you couple that with the story built in to her lineage, I think she’s certainly one of the most valuable commodities in the division.

Wai, curious who you have ranked higher than Charlotte as the best female wrestler in WWE ?

Rankings are all subjective, but if we’re talking in-ring, I put Asuka, Kairi and Sasha above her.

She’s athletically gifted and has a definite look no other competitor has in that division. If you are counting that as an important attribute I think she’d be featured regardless of her lineage. Whether the crowd would accept her as a face is a different story and that’s what has helped her be a big star to this point - crowd acceptance.

It’s hard for women to be on the indy scene, therefore she would have ended up being in the WWE regardless. Plus she is a very gifted wrestler with good personality and charusma, so her being where she is isn’t just based on her being Ric’s daughter (though it’s nothing that hurts her either).

She’s definitely in my top 5.

Being Ric Flair’s daughter definitely removed a lot of the luck/timing that usually factor into getting signed by WWE. But as far as talent and look, she belongs, no question.

Given her size and athleticism, I have no doubt that she’d still be a major player in the WWE women’s division regardless of her genetics.

But being 2nd generation almost certainly led to her being pushed stronger and more quickly than she otherwise might’ve been.

Rankings are all subjective, but if we’re talking in-ring, I put Asuka, Kairi and Sasha above her.

You don’t think Sasha’s hypothetical ranking is hurt by the fact that she’s regularly almost killing herself over recent months?

I loved, loved, LOVED Sasha in NXT. I even loved her feud with Charlotte (and the constant title flip-flopping) more than others. But as WWE have booked her into being just another female superstar, she’s taking more and more risk, and is becoming more and more of a danger to herself.

It’d be tasteless as hell if Vegas offered such a market - but if there was a market on WWE wrestlers with major neck surgery in their future, I’d put everything I owned on Sasha. Obviously I hope that doesn’t happen, cos I’m still a fan. But she’s become a danger to herself as she’s become more desperate to remain a major player.

That said, I really want to see Sasha vs Bailey (again) at Wrestlemania. I’d almost prefer it on the pre-show too, cos it’s the only way they’d get 15 minutes to put together a banger.

Just as look is an important attribute (Charlotte), so is the ability to sell (Sasha). Yes it looks like she’s almost injured after every big spot, but her ability so sell those near death moments is second to none on the roster. She very well may not have a long career but she has a natural skill in selling. 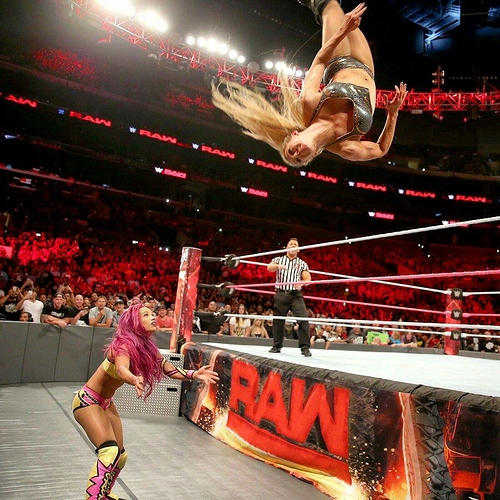 Yeah… I think she would have been signed regardless

I’d say she would definitely have been signed and still a pretty big hit. Must say that I don’t buy her as a babyface though, that may be because she’s had sod all going on for a while now.

Ah c’mon, you can show a photo of any woman doing a similar dive and could say the same thing.

I think she’s good, even great at times, but she can’t emotionally draw me into a match like a Bayley or Asuka. What I see with Charlotte is someone who is good at wrestling…that’s where the buck ends though.

i feel as far as her first push is concern, yeah, i did help her to be ric flair’s daughter because while she is really talented, at the time, she wasn’t ready for the major push she got and had to be carried by better opponents especially Sasha banks. Plus her promo’s at the time we’re terrible but WWE wanted to focus to be all on her and she had to adapt fast and she did. Having said that now that’s she more comfortable in the ring and on the mic, it’s not as much of a factor anymore, she getting push on her own merits now but i would say that at first, it did help that her father was Ric flair.

To me her name got her attention of WWE but her talent has got her where she is today. As seen & now heard on Keep It 2000, just by having the name Flair doesn’t mean a push can work.

This. Many second or third generation wrestlers have been given a shot or push, but many of them amount to nothing. Look no further than Tamina, Curtis Axel, and Primo Colon. All current superstars who I’m sure got their foot in the door with some family name help, but ultimately haven’t amounted to much (though Axel I think is underrated). Charlotte I think has certainly earned her spot, Flair or not.

I dont think she is horrible but she needs to concentrate on basics and stop doing all the high spots. so many matches I see her doing stuff that looks sloppy as hell or dangerous. Her whole life she has seen he father strut and wooo and she cant even do either one worth a dam.

You could argue that too many wrestlers today focus on high spots. That can be an issue for her, but I think she’s the total package (sorry Lex). It may have taken longer to get to where she is, but she’d get there.

I find Alexa Bliss to be more entertaining to watch. I would also put Becky, Bayley, Asuka, and Sasha of the NXT call ups to be better. I also think Mandy Rose has the potential to be better then all of them.