Leave us your feedback and questions following AEW Dynamite.

Davie Portman and John Pollock will be live at 10 p.m. ET 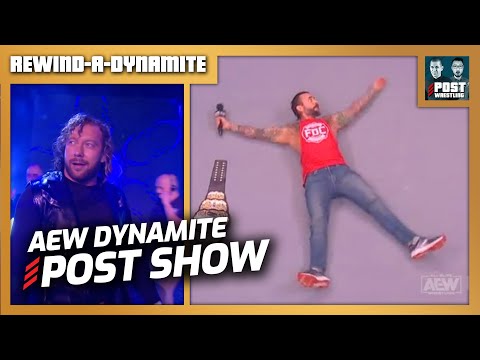 That Punk promo was fire…AND THAT SMOOCH FROM MOX!! THE SMOOOOOOCH!!!

Great episode with a phenomenal promo segment with Punk and Mox and excellent 2/3 falls match with Garcia getting elevated even more. Now I’m baffled as to why we are getting Mox vs Punk next week, if this was another company it just screams non finish DQ. But we don’t get that in AEW so why book it? Also it’s in Ohio so you can’t just beat Mox there. I’m glad Kenny is back and I hope it’s just playing up him returning or actual rust but Kenny did not look as good as he usually does. Now I’m not expecting main event Omega off the bat but maybe he has returned a bit early. Overall I’m liking the road to All Out.

Great start to the show. Surprising that Mox and Punk are having their match next week. This has to lead to a DQ/screwy finish right? Thoughts on what could be the match at All Out if not this? Hinting at Eddie x Punk for Arthur Ashe?

They really love putting women right on the 9:20ET spot.

Was the ending expected because the camera almost didn’t catch it?

Charleston got a lot more than they bargained for tonight.

I’m instantly intrigued by the angle involving Kenny Omega. No one asked for any predictions, let alone mine, but I think Kenny eventually costs the team, the Bucks turn on him, Kota Ibushi saves Kenny, and the Golden Lovers reunite one last time. America could use some golden love right now.

I’m also intrigued but somewhat troubled by Punk/Moxley occurring next week rather than at the pay-per-view in Chicago. Seems hotshotted, though I suspect there’s more afoot than meets the eye.

Last, Happy Birthday to my brother Trevor, who turns 36 on Saturday!

Outstanding first hour of this show between the Punk and Moxley’s war of words, and Danielson and Garcia putting on another tremendous match. I’m a big fan of this angle of Danielson trying to save Garcia’s wrestler soul. Happy to see Kenny Omega back in the mix, but also concerned because of how he may be physically, and because of Don Callis being back by his side. Very curious where this babyface trio with heel seconds go. I’m guessing Punk vs. Moxley next week will be something small to lead to something bigger at All Out, maybe throwing in Hangman Page to make it a 3-Way.

Loved this episode so much. Danielson and Garcia is right up there with some of the best matches in dynamite history, Main event was bonkers in all the right ways and even if kenny isn’t 100% seeing him wrestle again was so awesome. couple of interesting decisions heading into the PPV, Mox and Punk being next week has so many different ways it can go, I feel the most obvious is a returning MJF and I feel like this could be an opportunity for a rare DQ finish which would put a ton of heat on MJF for spoiling the match. also I gotta say im actually kinda happy FTR aren’t challenging Swerve in our glory for the titles just yet, theyve only been champions for about a month and Id like to see them have some meaningful feuds before dropping the belts.

Punk/Moxley was a great promo to start the show, but I didn’t like the Hangman call-out go unanswered. Especially being in West Virginia, his homebase, Hangman comes off cowardly, which is not what he needs right now since he hasn’t wrestled much since losing the title. That aside, the promo was biting and personal, which played well into their multiple brawls during the show. Having the unification match next week instead of the PPV blindsided me. Could there be some kind of Hangman or MJF involvement?

What didn’t work for me was Jungle Boy. The crowd kinda got to him, but I got a kick out of his School Teacher Shameful Stare back at the crowd which actually stopped the “What” chants. Eat your heart out, Undertaker!

Danielson v Garcia was amazing stuff. One of my favorite TV matches this year. Garcia is a completely made man, and the crowd organically chanting “You’re a Wrestler” was the icing on the cake.

The subtle yet expected return of Kenny Omega started great… Up until you saw all of the new protective gear that he’s wearing now. Seeing him in the compression top and the Stone Cold grade shoulder brace made me feel uncomfortable. Unless this is all a very elaborate sell by Kenny and he’s fine, parts of the match felt like Kenny was exaggerating things and part felt like he may have been back to early. Either way, a fun match and show overall! The ending of the show seemed rushed, as the cameras caught Kevin Dunn syndrome and cut to multiple shots at once while Andrade was turning on Dragon Lee.

8 Daddy Ass Scissors out of 10

Very good show tonight! I liked the bookending of the Punk/Mox angle up to the start of second hour; very smart, although I was definitely clamoring for more physicality but I won’t have to wait too long for that!
Awesome match between Garcia and Danielson. Daniel Garcia just continues to grow exponentially before our eyes and the organic “You’re a wrestler,” chants as he stood between Danielson and Jericho was perfect.
Kenny Omega’s return and the selling of all his injuries really brought into question the probability of the trio making it into the finals. Love the adversity story building to make the eventual victory so much more meaningful. Good stuff tonight!

Another classic first half to an episode of Dynamite. Not to say the second half was of poor quality.

On a show where the presumed All Out main event was announced for next week, Kenny Omega returned and Daddy Ass scissored his way back into our hearts, my biggest takeaway was the crowning of the company’s new top heel.

The guy on the floor with the massive sign.

An effectively bookended Dynamite with the Punk/Moxley promo and the return of Kenny Omega in the main event. The middle of the show was strong with Danielson/Garcia shutting it down with their excellent 2/3 falls match and the post-match aftermath with a conflicted Garcia surrounded by “you’re a wrestler” chants was tremendous.
I’d bet that Jericho/Garcia will be the match for All Out. A women’s match is once again in the 9:30 death slot (must be a day than ends in ‘y’). I’m pretty leery about Kenny returning with Don Callis tagging along. Cole/reDRagon betraying the Bucks constitutes Kenny going babyface.

Does anyone see Punk/Moxley having a real finish next week?