An oddly booked episode.
All the players were there - just very out of order.

Punk was 10/10 again (especially for the on the fly Danielson tease). Rest of the show was pretty flat anf average - something no Dynamite has really felt like before.

No problem with the squash main event, but should have been more dominant and brutal.

Opener was fun, as was Varsity Blondes vs Lucha Bros.

Looking forward to next week much more- especially FTR vs Santana and Ortiz. 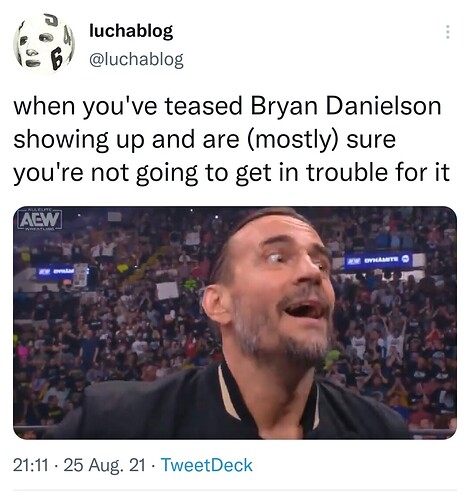 Not a good episode of Dynamite. I thought they would give CM Punk the last 15 minutes and just let him talk. They asked him one question and that was it. 3 of the matches on here could’ve been Dark matches. Lee Johnson coming out for the save at the end did nothing for me and the crowd and was not a good way to end the show. Whatever happened to the Pinnacle? Until they showed that FTR promo, I had forgotten the Pinnacle was even a thing. This show will be mostly forgettable. The only thing I will remember will be CM Punk’s line, “That’s someone else’s schtick, have some more patience”. Great line by him! 5 out of 10 for me

Middle of the road show on its own merits. Judged against most AEW shows, one 9f their least interesting offerings. Too much time spent on acts like Gunn Club, Qt (again), the Kojima reveal was a letdown. Match listing for Rampage looks a lot mire interesting. Just a very blah show, IMO.

Disappointed with tonight’s show. In what might end up being their highest rated show in company history coming off the heels of the Punk debut, I think it was important for AEW to have a great show to keep these new fans watching. I’m sure they will be just fine as it’s one show and Punk killed it, but I was really surprised by tonight. Does Punks comment mean Danielson is a lock?

An extremely average episode of Dynamite tonight. Some odd booking decisions, but Punk was amazing and I loved his nod to Bryan Danielson… I’m really glad they are letting do his own thing on the mic because that’s what people want.

Kenny saying “you think you know me?” To Christian got a good laugh from me. Kenny deserves a Emmy, so do the bucks. Callis should only get a golden globe because he’s a dick.

I have nothing else to add except for a friend of mine said they should call Brock Anderson, Brock Arnandersonson and that was my highlight of tonight next to Punk. Oh and Lucha Bros and Varsity Blondes was good too.

I loved the mic work tonight, but the in ring stuff fell kinda flat.

Just get QT off Dynamite, the guy sucks and there are far more talented people who belong on the show. I also thought the women’s match was sloppy as hell - Red Velvets standing face plant moonsault looked bad and very painful. Matt Hardy is another guy who doesn’t need to be on Dynamite wrestling in a cold match at this point of his career.

Very very average show. They should have loaded this one up coming off of Rampage.

Terrible decision to do Moxley/Kojima, unless Moxley runs through him and someone bigger shows up, which I doubt.

Black really should have hit a Black Mass right away as Brock was running toward him and pinned him with the foot on his chest, like he did with Cody. He should have laid out Arn and then laid out Lee Johnson as he slid in the ring and the show should have ended with him standing in the ring, with all these guys laid out.