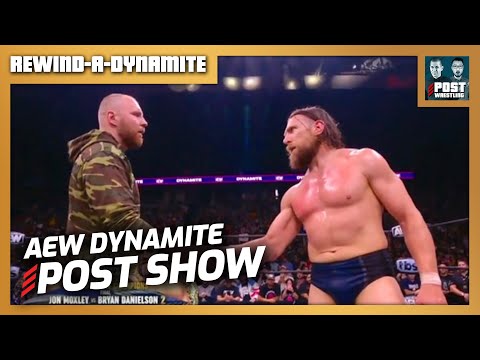 I have to thank you both for opening up for that episode of Talk. It was really nice to hear two dudes talk about becoming parents and dealing with new borns. I have an almost 3 year old girl and although its definitely getting better, theres not a lot of dad focused content similar to what you two shared.

My daughter was born on a Wed in Nov 2019. That night we watched Dynamite as a family in the hospital so Wai your Smackdown story brought back beautiful memories.

Dynamite was great, you two are better

Wai, I hope your wife is recovering well!

An average episode for the most part. Really enjoyed the Danielson / Jericho match above all else. Much better than their All Out encounter.

Personally hoping they pull the trigger on giving Bryan the big win in NYC next week.

Other than that, also enjoyed the Tag Championship match. Definitely like seeing more Swerve & Lee matches on TV, and honestly not sure what the outcome should be for them vs. The Acclaimed.

Have a good night guys!
Oh, and absolutely loved the episode of Talk. Keep up the excellent work.

Joking aside, another strong edition of Dynamite. My biggest takeaway was yet another great Jericho performance. He faced some criticism throughout the year, peaking with the win over Eddie Kingston in the barbed wire match. But ever since, he has been working his ass off every week. I think 2022 will stand out as one of the best years of his career by the end of it.

Thanks as always for the shows, really enjoyed Talk this week as well!

The two world title tournament matches were very good. Moxley/Guevara had little doubt who was advancing but the Jericho/Danielson match did draw me in with the eleventh hour selling by Bryan. Now, Grand Slam has a lot of questions going into the coin flip of a main event. Does Friedman throw a wrench into the proceedings? Can Mox pull off the threepeat? will Bryan get the title that has eluded him all year?

Personally, if either man win. Does anyone see a transitional title run so they can be fed to Friedman? I hope not!

Elsewhere, the Baker/Hayter dissension needs to stop dragging its feet. Grand Slam needs to strike the iron while it’s hot.