On the next Rewind-A-Wai, we revisit a classic: Heroes of Wrestling (1999). This is a review chosen by Espresso Executive Producer @Brandonfrmnj.

How will a third (and final) viewing of this show affect @johnpollock’s well-being? Listen Tuesday on the POST Wrestilng Café Patreon feed.

I have no feedback other than “thanks and good luck”. I sadisticly look forward to the review. 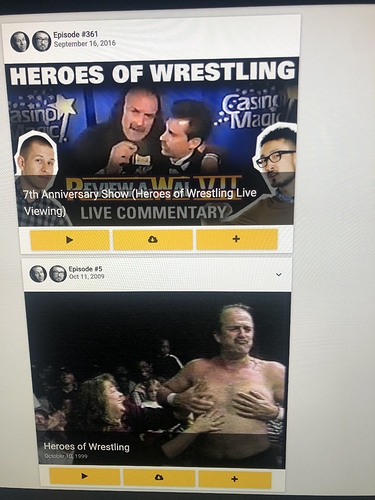 I won’t be able to watch this entire event until after your review is posted but excited for this 3rd Stage of Hell. I was able to catch the Jake The Snake Promo before the main event and feel he summed up the entire event perfectly In his interview

“to gamble, you must accept losing”

It’s amazing Jake is still alive when so many others are not. Him, Ric and Iron Sheik are truly blessed and medial miracles

Being a relatively new fan, 2005, this show has never really been on my radar so I thought I’d go back and listen to the original review. You guys were way more excited to watch/review this back then, enough that I almost went back to watch the show but by the end of the review I knew there was no chance I was going to spend 3 hours watching this knowing a had no nostalgic love for anyone involved.

Having not seen the show I don’t have any feedback on the show but did have a question on the podcast itself. Is there any reason you don’t play audio clips from the show’s anymore? I thought they were a nice addition to the podcast. Also did you try to reach out to Bill Stone to do a 20 year retrospective on the event.
Bless you for watching this trainwreck for a 3rd? time, looking forward to the updated review.

Can we place a limit on how much he calls in? A request like this is insulting when it’s been done twice already and it’s clearly a joke. You guys are busy enough and go out of your way for all the patrons, let alone all the free content you put out.

And Scott Hall if I can add one more to that crazy list.

Bless you guys for watching this a third time. Bless Brandon from NJ who gets a bad rap by those who haven’t spent time with him. The dude is as solid as the Yes chant is over. He adds to the community in so many ways and I am delighted to have him in my life on Thursday’s.

I had never watched this show before. Never heard your previous reviews of it, but hearing you guys mention it over the years on other shows about how bad it is, I decided to finally check it out. Lets just say, I didnt last very long and decided to quickly skim through it. I know it has been 20 years, but why did this show look so bad? It looked like it was taking place in 1981, not 1999. Did they do that on purpose?

It felt like I was watching an episode of a 2019 Monday Night Raw at one point, with that cuck angle between Sherri, Steele & Valentine. Nice to see the classic storylines never die.

Best part of the show was the Tully promo. So happy he’s still going strong to this day. Any idea how much this show cost to order on PPV?

Abandon all hope, ye who watch this show. When I found out that you guys was watching this for the 3rd(!) time I knew I had to watch in solidarity. I did not watch HOW at the time due to the fact I was 2 years old and did not have access to PPV, so I was made aware of it via Brian Zane’s Wrestling with Wregret review so I was aware of what I was in for. It did not help.

Over the weekend of November 9 or 10 I endured this piece of filth in chunks to lessen the pain. When it was not a clusterfuck it was as boring as being at the doctors office after spending a stint at the dentist. Most of the matches were slow and plodding with the exception of Julio Fantastico vs 2 Cold Scorpio. The only noticeable highlights good and bad were Captain Lou being a nutcase on commentary during the Fantastico/Scorpio match, Tully Blanchard’s great promo which was an oasis in a desert of shame, Abdullah and OMG stabbing each other, kids in the crowd directing homophobic chants at Bob Orton and the Jake Roberts fiasco.

But at least I can go to my grave having seen the horror that is known as Heroes of Wrestling. I give this “show” -459.67 (or -273.15 if we are going by Celsius either way absolute 0) Dehydrated Beebees out of 10 and banish it to the 3rd ring in the 7th circle of Hell as described in Dante Alighieri’s Inferno for all eternity.

Chris Thunder from Down Under.

Honestly I think I may have been one on the people who suggested “Heroes Of Wrestling” for your 7th Anniversary live review during your pre-POST days. I am so sorry.

Their is almost nothing redeeming about this event, especially after multiple viewings. If I was to describe this event to another fan, “Imagine a 2-hour 30-minute pay per view of BotchaMania”.

When the bushwackers were entering the ring Dutch said “(quote) their walking around the ring, down under, thinking like it’s outback steakhouse or something. They think it’s Saturday night, their out drinking fosters beer, you know, going to shoot kangaroos or ride up and down the road with them aborigines down in Australian. (unquote)” Wow, that’s alot to unpack right their.

I’m happy to see that Jake is healthy today, I can’t imagine what I would do if one of my worst moments were recorded on tape forever.

In closing, their is no rating low enough for this event. I hate it and watching this never again would be too soon. Wai as you said during the 2nd time reviewing this “I was just boared watching this show, not entertained, not disgusted, just boarded” l completely felt the same way.

That said, I always have time for 2 Cold Scorpio.