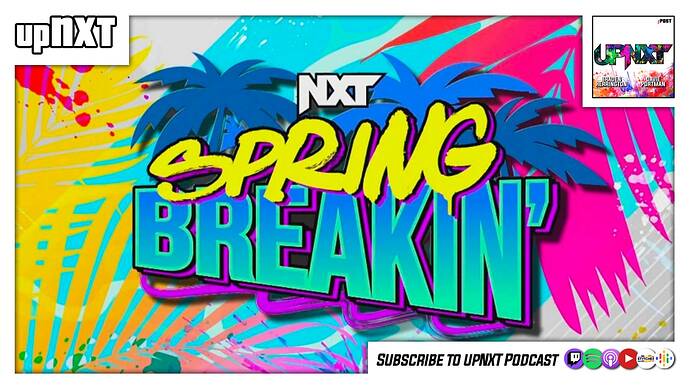 Leave all your feedback here for tonight’s NXT Spring Breakin!

Braden and Davie will be going LIVE on Twitch at 10:15ET with a brand new episode of upNXT!

Mark Long is an OG; I and several friends have long wanted a Challenge X WWE Crossover with the Miz. Once talked to Johnny Bananas about this in a the club. I might come back to 2.0 for Mark Long.

I thought I was the only one on this board that gave a shit when the Miz and Long embraced at Mania after his match lol. I’ve watched that damn show for almost 20 years now, damn! 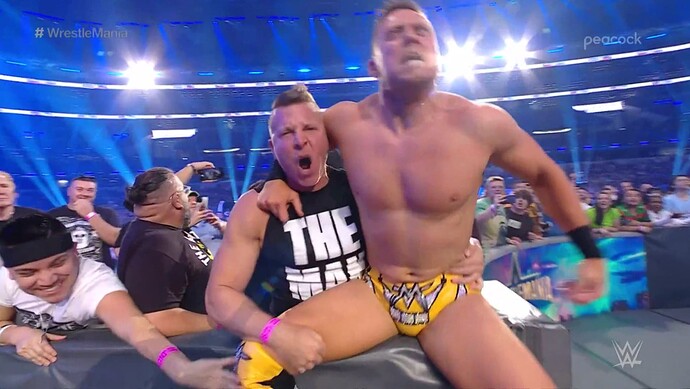 Me and 3 others erupted huge!!
I think there are tons of Challenge fans who grew up on WWE who enjoy the old stuff and simply fell out of it. The demo overlaps exactly with when both were part of pop culture peaks. When I lived in NY I would watch Challenge premiers/finales and Wrestling PPVs with a rotating mix of people all whom fell into this category (2 of 6 of us still watch both). Everyone popped huge for Long.

The challenge does amazing in ratings and demos and the All Stars which Mark helped put together was one of the early Paramount+ Only shows because it could draw an audience of rabid Challenge Fans.

There is a Challenge sub culture aikin to WWEs. Reddit’s and forums and podcasts and merch. It’s big. Bananas and I once talked about this exact thing and a crossover. Ironically this was before MTV decided to go all in on producing tons of new seasons with stars from other shows (something Bananas hinted at which makes me believe he had no reason to lie about a potential wwe crossover) According to him Miz and he lobbied multiple times to do something and never happened.

The Long sighting at Mania was chefs kiss

Ya, I’ve been watching the Challenge since The Gauntlet, I can’t say I’m surprised at all that there is a crossover. This is the reason why I’ve always been a fan of the Miz, as I’m sure you know, when he was on, he was always “the wresting guy” which was something I could connect with as at the time I wanted to be a wrestler as well (though unlike him I failed and was really shit

).
I remember back when he first came on the scene, I wanted Coral to be his valet lol.

I’ve never really gotten involved in the Challenge community. Whats it like? Is it positive? I really dont want to get involved in it if its anything like the IWC with all the negativity and anger.

Thats cool that you have spoken Bananas! He a nice guy? I can’t help but pull for him and CT every time they are on a season. Are they popular among the internet fans? I could see the internet challenge community (lack of a better term lol) hating him and CT, but I also wouldn’t be surprised if they loved them. Who knows lol.

Side note, I’m pretty sure All Stars 3 is just around the corner, the cast looks pretty stacked!

I’ve never really gotten involved in the Challenge community. Whats it like? Is it positive?

Very gossipy / modern internet culture but OG Derek does a podcast and they have events and stuff. I am not involved. Occasionally I’ll listen to an episode. I guess spoilers and between season drama is a big thing

Thats cool that you have spoken Bananas! He a nice guy?

Yes and this was before he blew up and got a NBC hosting gig. I could just tell he was thinking about the TV landscape on another level. Very smart. Friendly but I think he thought I was somebody too lol. (I’m not)
The best interaction was Jordan who shook my hand by moving his drink onto his nub hand in the smoothest motion I’d ever seen. My drunk dumb brain went to shake his bad hand because he was holding the drink in this hood one.

Also, some other good ones for off forum

Are they popular among the internet fans?

They get discussed like MJ and LeBron. The GOATs

Long put together All Stars with a bunch of people but he really spearheaded getting it done.

The entire universe of the Challenge has actually turned into a juggernaut. Regularly not survivor contestants and big brother cast will join the new shows. Which increases audience and fights churn. It’s cool use of a brand and growing it.