Allo, allo, allo! Davie Portman here requesting all of your feedback for tonight’s episode of NXT.

Join Braden and me on YouTube after NXT finishes for a LIVE episode of upNXT.

Eva from London,
Here is a pic of my cat I mentioned last week (TaPaul- star trek character) 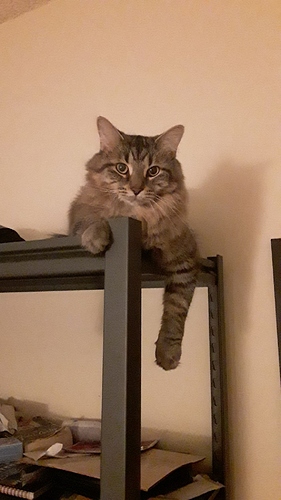 Now the moment you’ve been waiting for the redebut of Random Baszler Facts!
Shayna Baszler has a top secret plan about how to survive the zombie apocalypse. True story.

Keep up the good work Brayden and Davie, you guys provide quality entertainment

Io Shirai is back. Very excited. She’s my pick to win the ladder match in two weeks, and I feel like she should dethrone either Charlotte or Rhea when its time. She has an insane amount of momentum and comes across as a way more interesting character than Charlotte or Rhea. And she performs on an entirely different level as well. Her post match stuff was great since you could hear her laughing manically in Japanese, and claiming (in Japanese) she’s the best women’s wrestler in the world.

Tonight’s NXT was pretty goddamn great. A nice change from the past month or two. Also Io commented on her return:

Although I hurt my knee and couldn’t wrestle, I shocked the medical trainers by fully recovering within two months. Thankfully no permanent damage at all!! Time for Io Shirai to rampage again! 😈🖤 #WWENXT

One thing I think NXT can actually take from the main roster is having rotating guests on commentary. Having those extra voices during the matches really helps cover some of the dead air from not having a crowd. I thought not even putting out chairs in the arena was a good touch, though. Made it seem a bit less empty visually. I was impressed by Austin Theory’s ability to lift another human while taking a selfie. I thought everyone was great in the final segment and I’m happy that Io Shirai is back (although probably not as happy as Braden.) Shirai gets me high, but Kayden Carter gets me… nevermind.

Question: Do you see Killer Kross coming in as a face or a heel? Might be a dumb question since the word Killer is in his name but I’m not familiar with him at all.