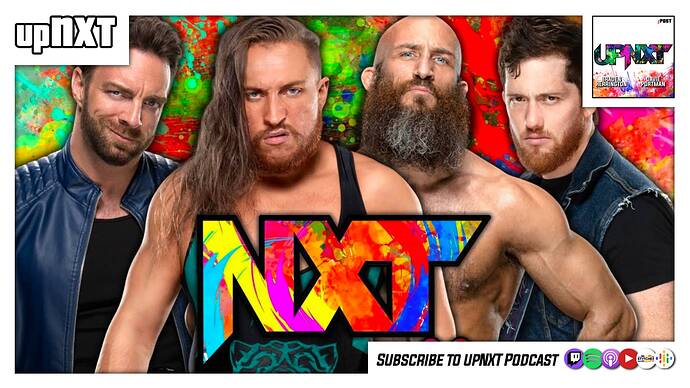 Leave all your feedback here for tonight’s episode of WWE NXT 2.0.

Braden and I will be going LIVE on Twitch with our new episode of upNXT 2.0 where we will be talking all about tonight’s show and reading your feedback!

Hey guys, its a me, Luigi from the Mushroom Kingdom

Hot take: this was the best NXT episode in a long time. NXT started losing its freshness since moving to 2 hours, and it becoming the ‘third brand.’ its needed a ton of new faces and its exactly what we got tonight. the kyle o’reilly swerve stunk, but also weirdly made me more focused on the match because we all thought Von was going to win the title. They boomed me. Brunette Mandy rules, Bron Breakker rules (bad name though), and I can’t lie, I love a good bad wedding angle. Wrestling

I didn’t watch, but came here curious to see what people thought. From what I’m seeing it was the best show in a long time, and it completely sucked. Great, lol.

It was the definition of a 5/10 show, which is all NXT will be moving forward.

The look of the show was much improved.

They gave Rick Steiners kid a horrible name, but he looked good. Why give him the same tights, mannerisms and moved as tight but give him that stupid fucking name? Makes no sense.

That woman’s singles match was god awful. It’s also jarring to throw so many people out there with zero direction or back story. That guy who got slotted in the title match made no sense, his first match he is challenging for the title? Horrible name for him too.

The Creed brothers are fucking awesome, but then it’s depressing to realize this is WWE and tag team wrestling dies here. They could be on the main roster right now.

The wedding was just bad television. Not sure how anyone finds any of the dialogue funny. Just bad acting.

I can’t imagine this show drawing a big number moving forward. Zero star power. I also wanted some explanation about why this is “NXT 2.0” instead of all the random shit that was put out there for no reason

I enjoyed it for what it was. A lot of new young talents. A lot of matches. Good for me.