What did you think of Raw?

Raw was fun tonight. Not everything was great but overall I felt like I didnt waste 3 hours of a monday night and that’s a win.

Not really sure where this Maria Kanellis stuff goes, that segment was probably the low point of the show.

Happy to see Styles back as a heel with the Club. Do you think they work Finn in? I feel like his character could use a good heel run

Holy attitude era tonight! Do you want pregnancy angles and electrocutions? We got you covered. Do you want to hear us say shit and bitch again? You’ve come to the right place. Seth and Becky are downright cringe worthy together on screen. I nominate that entire segment for one of the worst of the year.

I’m enjoying the 24/7 segments, so there is that. This company needs to find its identity

A better than average show in terms of booking and pacing but was it just me or was the scripting and characterizations of or about women really juvenile on this episode?

That’s one of the less well regarded and less often talked about parts of the legacy of ECW and the attitude era as well. In the current era where women’s wrestling and stories have been a saving grace I hope the better women characterizations stay with whatever changes are happening.

I got a rare night with the wife out of the house and decided to watch Raw live for the first time in a very long time and I gotta say, I’m not too pissed at my decision.

That opening segment was hands down the best of 2019 if not the last couple of years. While the “holy shit” from Corey may have been a slip, it was refreshing to hear something genuine.

Sure some parts dragged (Lacey and Corbin I’m looking at you) but overall a real solid Raw and if this really is the work of Heyman, I’m happy with the start and hope they keep this up. 8/10

Great Raw. The Club is back and I hope they can have a better push this time. Love the podcast and I just want to know who do you guys think is going to win the G1. I think it should be Ibushi but Naito would probably win it again.

I feel like most people will be comparing today’s show to what we’ve been given the last few months. And I can see there’s some improvement but, I just don’t think there was one match I would recommend someone to actually watch. Maybe the last match with AJ bringing the club back, but honestly the need for a commercial break really undermined the whole idea of the foot under the rope.

There seemed to be an overall tone regarding woman I really didn’t like. I can’t explain it but it felt like woman weren’t strong roles and characters. Just what their role was in comparison to a man they are with. Becky to Seth, Lacy to Baron, Maria to her guy, Carmella to R-truth…

I actually felt like many of the mixed matches from last year’s mixed match challenge handled a woman and man team up better, as both always felt individually strong. I could be wrong there as it’s been a while.

I felt the show flowed well and even although it maybe slowed in the middle what was happening did make a coherent semi logical story.

I see people complaining about the ad breaks if no one had said it was a thing before tonight’s episode I don’t think many would have noticed.

Promising show tonight. Not everything was great, but I’m glad I tuned in for a change.

Did you guys see the WWE Instagram page made a huge mistake in the street Profits announcement by writing “The NXT tag team champions AEW on Raw tonight”? The Young Bucks are going to have a field day with this on Twitter. 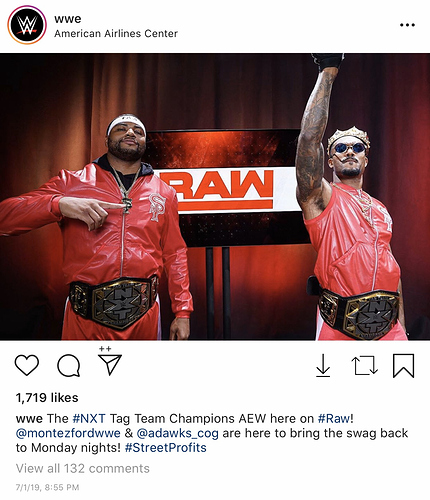 I was at the show live. Was a good show overall. Live crowd was into most of the show. Live crowd reacted huge to the stunt in the Falls count any here match and also to the undertaker. During some commercial breaks, they had superstars come out and entertain the crowd. Lucha house part came out and threw candy to the crowd. Hawkins and Ryder talked about their experience at wrestlemania 32 in Dallas and Dana Brooke got the crowd to participate and I “Fan Cam” that you typically see at sporting events. The show felt different and that’s all you can ask for. 8/10.

After the big announcements last week, I thought I’d give Raw another chance for the first time in months, at least to see if there would be any further information given. While I didn’t get that, I did get something I didn’t quite expect: a halfway decent Raw. Although the show wasn’t perfect, it didn’t seem to be as bad as the shows you guys have been reviewing lately. I was really into the Falls Count Anywhere match, and as soon as Corey exclaimed “holy shit” I started laughing so loud that my wife, who hates wrestling, came from the other room to see what was going on. I rewinded to show her the angle, and she immediately asked ‘WAS THAT REAL?’ I’m sorry to report that I did indeed kill kayfabe for her, kind of regret it. 6 out of 10.

Wow, that was a fun Raw. Ridiculous stunt to start the night to draw us in. A world champion losing and it meaning a ton because he’s been unstoppable for months. Drake Maverick’s chase for the 24/7 title being so good he may have gotten his wife a job with WWE (and can’t wait for the honeymoon cash in). And of course, the much desired reunion of The Club to give us our first major US Title feud in a while. It’s a start, but more of this will go a long way.

Show starts with a moment that will be relived forever in highlight packages and it was executed great! Graves drops a Holy Shit, Announcers laid out after, new camera angle.

A vintage Taker entrance and promo
A smart finish to the New Day match
A spotlight on C and D list talent on the Roster in segments that seemingly gave them storylines.
2 show long storylines with payoffs in Mr 24/7 and The Club
Richochette and the US Title get featured

I have to give this show a 10 just by comparison to what feels like years of bullshit. Was it that simple to just present a good 3 hour Raw? Surely it can’t be that easy. Tonight was entertaining, flowed mostly well and logical, and while I can’t expect everything to be great, I’ll settle for more enjoyable segments than not.

Gotta think Heyman will get all the credit for this and I don’t know if that’s true, but whatever, hats off to WWE for doing the seemingly impossible.

I thought Corey’s swear line was both delayed and too slow in delivery to be authentic. If an announcer uses a swear word it should be immediate. He should have reacted in shock and momentarily disregarded all the standards and practices.

Have you checked your emails?