Who’s heading to this bad boy tomorrow? Arguably the best indy promotion in Britain is holding their first show of 2018 and, in true FCP fashion, most of the card is being kept tip-top secret. Here’s what’s announced for the show;

Zack Sabre Jr and Angelico (both back to FCP from lengthy a hiatus) represent SPLX to take on the mighty Moustache Mountain!

Now this…Oh boy! The re-match of their absolute classic from last years International Tekkers, Omari and Keith Lee are squaring off again! Their last match tour the absolute house down and I even voted for it in several MOTYC ballots. This had me immediately buy a ticket the second it was announced.

The Attack Pro! clusterfuck! These always go down a treat. Session Moth is an in-(wrestle)house favorite, Drew Parker has been working his ball off up-and-down the country and ‘No Funnnaaahhh’ Dunne has probably the best heel act in all of BritWres. Expect plenty of noise, fan interaction and insanity.

So aye, that’s your lot! Pete Dunne and Chris Brookes are also on the poster so can we expect FCP Championship and UK Championship defenses on the show? Maybe a CCK tag match and some escalation on Omari’s road to the championship?

Also, @johnpollock would you like the results/recap of the show?

Gutted to not be going to this after a run of trips to Wolverhampton for the last few shows - they’ve been so much fun. The Starworks venue is a great venue for wrestling (and Wrestling after parties).

The Omari/Keith Lee match last time was up there on my Match Of The Year list, really hope they can recreate that magic again.

This looks like a great card. On a side note I love the photos in these graphics. It just fits Fight Club so well.

Gutted to not be going to this after a run of trips to Wolverhampton for the last few shows - they’ve been so much fun. The Starworks venue is a great venue for wrestling (and Wrestling after parties).

The Omari/Keith Lee match last time was up there on my Match Of The Year list, really hope they can recreate that magic again.

I’ve not been to the infamous after-parties but I do love the venue. It’s perfect, there isn’t a bad view in the house. My only gripe is a lack of pubs and bars in the immediate area but that doesn’t matter once you’re buying those pint cans with free ice.

It’s payday too so I might finally grab one of those sweet CCK tshirts.

Don’t believe Pete Dunne is on the show, but there’s plenty going on with the ATTACK! involvement as well. I’ll be back in Wolverhampton the next couple of months, but not this one sadly.

It would be a bad turn of face for FCP to have Pete plastered on their ads but then not remove him when they know in advance he can’t make it. I’m not too fussed if he’s there or not but I’m sure he’s a big draw for a lot of people going tonight.

I mean he could wrestle the first match and then catch a red eye to Philly. I remember seeing PAC wrestle in front of 90 people way back in 2007; he was in the third or fourth match and quickly left the venue as soon as the bell rung to be in SoCal for PWG the next night.

I had to leave straight after Keith Lee/Omari due to a family emergency so I have no details on the main event.

To start the show, Trent Seven announces that Pete Dunne and Tyler Bate won’t be in attendance. He then makes jokes about them being in the Royal Rumble and brings up that you can actually bet on all three of them to win on some gambling sites.

He then announces that the finals of the second annual DTTI tournament in April will be held…at Birmingham’s NEC arena! This is one of Birmingham’s biggest venues and the largest show that FCP have attempted. Personally, I’m a bit skeptical: announcing a large arena show on 3 months notice and taking place one week away from WrestleMania seems like bad timing. I won’t be there as I’ll be traveling to New Orleans via Houston, Texas for 'Mania and I imagine a lot of fans will be in similar situations or saving their money for the trip. I wish them all the best though as they are truly the best promotion in the UK and they deserve a lot more eyes on them.

Bowlarama won the 4-way tag. Fun stuff from the Attack Pro lads and a great way to kick off the show. Way too much to write about and it’s understandable due to all the big personalities involved.

Sabre Jr came out to a big reaction. His new entrance theme (‘Mother’ by IDLES) is brilliant by the way and fits his character down to tee. Zabre and Angelico’s opponents were revealed as Aussie Open who came out to a massive standing ovation due to their recent ventures in Rev Pro and PROGRESS. These are our home town Aussies and they seemed genuinely touched by the response.

The match was fantastic. Angelico is working a more mat based, striking style which will increase his career and lifespan by about thirty years. Sabre was in total dick mode and it was great as always. Kyle played face in peril before Davis’ big hot tag. At one point Davis planted Zabre right on his neck with a one-handed powerbomb and we all thought he was dead for a second. Aussie Open won when Davis hit Zabre with the Close Your Eyes And Count To Fuck (a pile driver variation where he pulls the opponent off the floor by the legs and into the pile driver). Aussie Open have really connected with the FCP faithful and I hope to see them lead the tag division and win DTTI.

After an intermission, we had El Phantasmo Vs Adam Brooks. This is Brooks’ FCP debut after a successful showing at PROGRESS. Both men impressed and should be regulars here. Phantasmo won a solid match that introduced Brooks to a new crowd without giving away his more crazy, head-drop offence.

Up next was the match that had me buy a ticket the second it was announced, The big re-match between Omari and Keith Lee. Omari won the first match and now Keith wants revenge. Oh boy. Omari isn’t a name on many people’s lips outside of the West Midlands BritWres scene, but believe me, he will be soon enough.

This was incredible. It played off spots from the last match whilst building something completely new at the same time. Keith dominated most of the match with big slams and strikes, occasionally letting Omari have some brief comeback before knocking him down again. Keith murdered Omari’s chest with double over-head palm strikes. Brutal stuff. Omari made a comeback, knocking Kieth down with his own strikes and managed to deliver a fisherman’s suplex to the big lad. The big climax of the match was a really scary top rope Spanish Fly by Omari. If Kevin Dunn were in attendance, he’d have had the camera focused on me for a minute during and after this as I was half covering my face with both hands.Keith Lee won shortly after with a big slam and both men got a standing ovation.

Keith got on the mic afterwards, put over Omari, and then demanded a tie-breaker match, that will also have Omari’s number one contender’s trophy on the line. Unfortunately, it was during this promo that I was alerted to a family emergency and had to promptly leave but I think the rematch will be at the NEC arena, which is Omari’s hometown of Birmingham.

From what I saw, another fantastic show from Britain’s worst kept secret. This will probably be my last show for a while as I’m saving every penny I have for the trip to NOLA so I’m gutted to miss the developments and fallout from the show, as well as the DTTI tournament. But ah well, swings and roundabouts. But yeah, get this show when it arrives on VOD and DVD, especially for the Omari vs Keith Lee match.

Credit to @TheIndyCorner on Twitter for the results to the main event and this clip from the Omari/Keith Lee match; 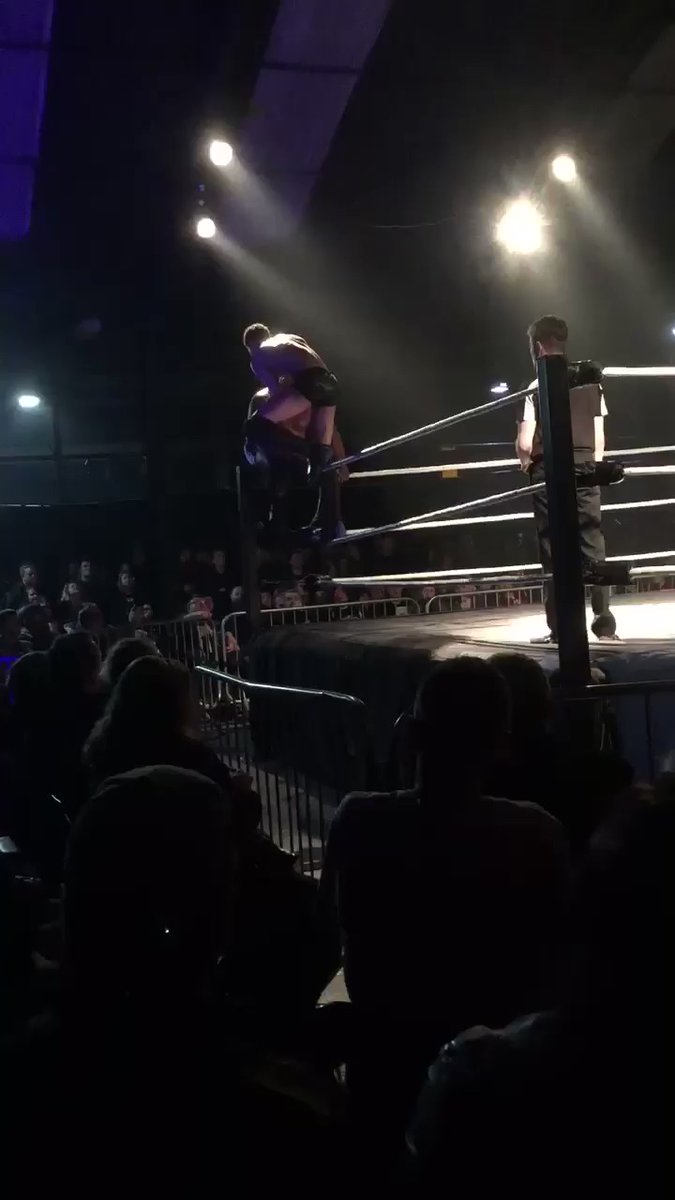 Thanks for this!
I’m also a little worried about them running an arena. To me it seems like many indy promotions saw that they can run an arena after ICW did the Hydro and they probably feel safe knowing that they’re general shows sell out so quickly. Plus many have ventured out to run in slightly bigger place, Fight Club have moved to a bigger place and Progress have successfully ran Brixton & Ally Pally.

Apparently they’re running one of the smaller conference rooms at the NEC - it’s in conjunction with an e-Sports festival, and GAME are part-financing the show. So it won’t be a Hydro/Wembley level undertaking.

I’m also a little worried about them running an arena. To me it seems like many indy promotions saw that they can run an arena after ICW did the Hydro and they probably feel safe knowing that they’re general shows sell out so quickly. Plus many have ventured out to run in slightly bigger place, Fight Club have moved to a bigger place and Progress have successfully ran Brixton & Ally Pally.

Cheers! The issue I have stems from the amount of time they’re leaving to promote the event. ICW announced the Hydro a whole year in advance and had a weekly streaming episodic show on their on-demand site. I really hope it works though, I’ve got every bit of faith that they’ll put 100% into getting that place packed out and simultaneously giving the finger to those shitearses at 5 Star.

Apparently they’re running one of the smaller conference rooms at the NEC - it’s in conjunction with an e-Sports festival, and GAME are part-financing the show. So it won’t be a Hydro/Wembley level undertaking.

Ah, that’s interesting! I wonder what sort of cross promotion FCP will do within the e-sports community? I’m not into it at all but I’d watch Trent and Havoc play some Rocket League or whatever.

Well, they’ve got one more show before the start of the tournament, so I’d imagine that they’ve got some big names to help pack the place out.