Yep, I was there. Joey Janela beat Jordan Oliver, then said that Oliver has potential and brought up how he’s campaigning to face Will Ospreay at Spring Break. Janela said he could have the match if he leaves his four friends behind, feeling they’re holding Oliver back. Oliver refused this offer, leading to the 4 on 1 beatdown until Marko Stunt and Jungle Boy made the surprise save, setting up this Spring Break match. 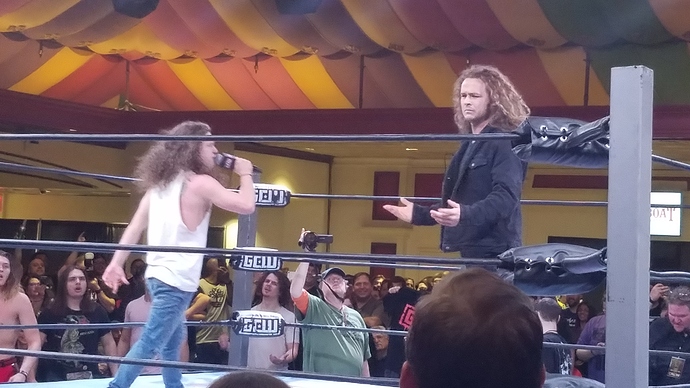 Very jealous you were there in person. That main event had more heat than I’ve seen in a match in a long, long time.

I saw All Out in Chicago and went to 2 Cups Stuffed on a whim and that event was my highlight of the weekend by a country mile. GCW is something real special.

I mostly had fun, especially from the first four matches, but from there it was all hardcore stuff, and I could really have done without all of the light tubes being used. Wasn’t expecting that, and I had to leave my seat during those specific matches as I was uncomfortable around the impending clouds of mercury or whatever.

Anyway, I’ll still be at the next GCW show, the sold out Philadelphia show next month at the Voltage Lounge (as tight as that place is, I really dig it, especially from a balcony seat.

Totally - when I saw them in Chicago I was not ringside, which added to my enjoyment (and safety - haha)