During an event for the America First Policy Institute, Linda McMahon was asked about Vince McMahon’s departure from WWE.

When the interviewer asked a follow-up question, she stated:

Well, you know what? He’ll just be deciding on how he’s going to spend his free time. I think that’s a good thing. Thanks.

After her last answer, she moved on from the conversation and didn’t want to answer any other questions when the reporter pressed her on the investigation of Vince and the hush money payments.

The way she dodged the Hush Money question. No shame. pic.twitter.com/lxolACqr8e

Linda McMahon helped launch Titan Sports alongside her husband and eventually, served as president and CEO of WWE until leaving the company in 2009.

After two failed attempts to secure a seat in the Senate in 2010 and 2012, McMahon was named the head of the Small Business Administration by former U.S. president Donald Trump.

McMahon is currently the chairwoman of the America First Policy Institute Super PAC.

When WWE is mentioned in that question. I’ve never seen eyes buldge out further. 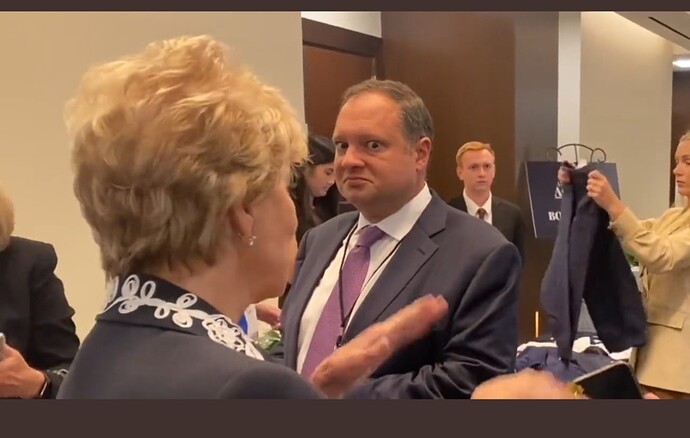 This has nothing to do with anything but I just feel the need to let everyone know I think Linda is a human fart. I don’t want that to be forgotten in all the Vince news.

Linda is a lot more gross than Vince, she’s just better at hiding it.

Reminds me of Judge Doom in Who Framed Roger Rabbit.

When I think I should feel sorry for Linda, I remember what she’s been a part of since 2017.

From what I understand her and Vince aren’t even together. They’re still married but not living together. I can understand why she probably didn’t want to hear anything about Vince.

What a surprise she doesn’t want to talk about how her husband is a piece of shit abusing the company she used to run…. While she’s out promoting some bullshit, xenophobic American trade politics.