I am thinking of going to the New Japan G1 Show in Dallas since I live there. However, I have never even watched but a match or two of New Japan, so I have no idea of the length of a show like that, and trying to plan.

Would anyone be able to tell me how long a typical G1 show lasts? It says it starts at 5 PM, but I see a lot of matches on the card. Is this going to be a marathon show?

I’m in exactly the same position! I live in DFW and held off buying tickets until the card was announced. Now that I recognize a few names and tickets are still available I’m thinking about going. But if i’m not getting home until after midnight I might reconsider.

The ticket prices themselves aren’t ridiculous but Ticketmasters fee’s are. A $30 ticket almost doubles in price to a $58 ticket which is insane.

It’s the same with Stubhub. They always add some fee.

Thanks! Still about 5 hours less than a WWE show haha

It’s the same with Stubhub. They always add some fee.

StubHub at least gives you the option of seeing the fees included in the ticket price while you’re searching so you know exactly how much you’re paying upfront.

AXS, which is broadcasting it live in the US (and thus US based NJPW World subscribers will not be able to stream it until after it is over), has set aside a 4 hour block for the show.

Yeah that is true

@RJB so are you going? Did you end up getting tickets after all?

I will be there. In the cheaper seats

I plan on being there too but I haven’t bought tickets yet. I’m hoping to get cheap tickets at the box office rather than buy them off Ticketmaster and pay all the fees.

good luck. Meeting up with a guy at house of Blues around 3 then walking over at about 4 if your interested. Will have a Will Ospreay shirt on. 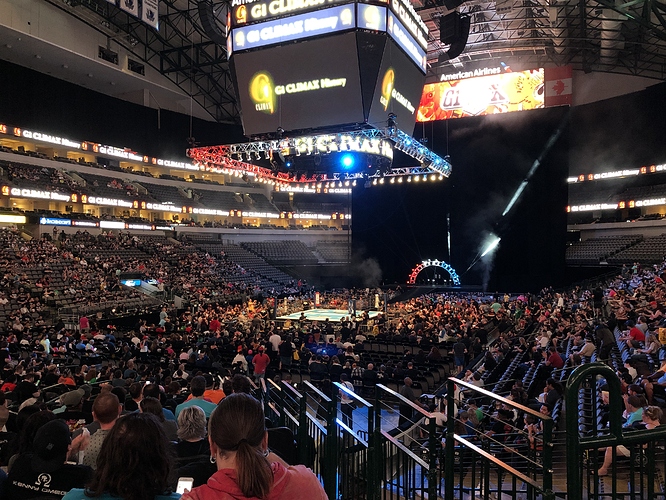 The ring is closer than it looks. Amazing seats for $40 bucks. But the entire top section is blocked off. The bars outside the arena said they were told tonight would have around 5,000 (so most of the bars/restaurants are closing early).

Stoked for those of you in attendance!