Obviously for those that aren’t following the tapings update (spoilers ahead), I thought I would try and look at the roster / feuds / the show itself and see what people thought on what a 2 hour show might look like.

Overall that’s a pretty sweet line up of talent that they have been using recently to base a 2 hour show around, hopefully giving a lot more shine and more time for matches by a lot of underused talent.
Be interested to see how the talent both in and out the ring cope with a 2 hour live format every week. What other feuds / issues / concerns / things you are looking forward to in the new NXT?

Sounds like a plan to me. Unless they’re bringing Eva Marie back to pin shayna im not interested.

Unless they’re bringing Eva Marie back to pin shayna

I think my posts in other threads have been pretty negative on the move to 2 hours. But a couple of possible positives:

And the NXT style of presentation with video packages that use sub-titles could be a huge benefit to amazing wrestlers like Gran Metalik.

I will give it a shot, but it least it puts the nail in the coffin for my WWE Network Sub, I am Canadian but picked it up in the US and with no cable I don’t get to watch Raw or SD live and have to wait 4 weeks to clear a blackout period so NXT and the PPV’s were just enough to justify the sub. Even with the minor 24 hour blackout for NXT it just isn’t worth the hassle to me.

I wish WWE was savvy enough to negotiate a live stream option for Raw and Smackdown where it is available live on the network w/ all commercials then it is blacked out for 4 weeks, but I am sure there is a more red tape than I can imagine.

I also have questions

I love this roster

It does seem that their direct to consumer offering is less of a priority now than a few years ago as the money is in business to business opportunities that are paying them stupid amounts of money for rights. That being the case, it does make the Network less of a priority for new content, however, it’s catalogue of content from the last 50 years of wrestling and it’s docs are one hell of an offering (if that content interests you).

The live stream would be impossible due to exclusivity and hold backs against the USA TX. I’m sure they could have ended up with less money and a side streaming deal, but WWE are all about that big cash.

And some great questions:

Love that WWE has made it difficult to even cancel payment and stop your network subscription. I tried doing it now and it tries to warn me that by leaving I miss Clash of Champions and Hell in the Cell both of which are coming in or around the next month.

You have two options;

The answer that keeps your plan active navigates the account holder to the network library. The option to cancel does nothing. Could just be a coding error but I just think it is too coincidental. 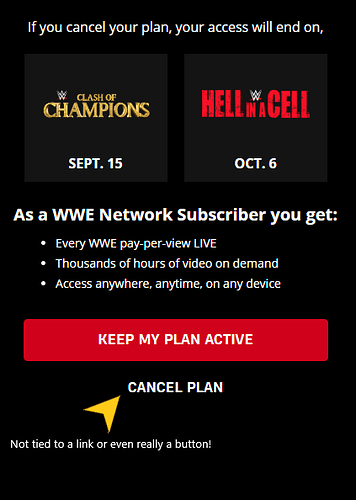 Tried it on multiple browsers, and account management isn’t supported on the mobile app.