**Wai Ting and I will be LIVE with Rewind-A-Raw tonight at 11:15 pm ET for Double Double, Iced Capp & Espresso Patrons. We will also be announcing two more shows scheduled for POST Podcast Day on Saturday, April 3rd, which is a live Zoom event for POST Wrestling Café members at all levels.

**We’ve got an interview posted with Anthony Kingdom James, who provided the illustrations for the new book Austin 3:16: 316 Facts and Stories About Stone Cold Steve Austin. We also discussed the impact of the pandemic on the local Toronto wrestling scene, his plans for promoting, and marketing yourself at the independent level.

**The finale of Rewand-A-Vision with Wai Ting & WH Park has been released free for everyone with a review of the documentary on WandaVision, plus Wai Ting interviews Ithamar Enriquez, who appeared in WandaVision as the “Commercial Man” in Westview.

**This week’s POST Wrestling Café sale is for The Rocky Maivia Picture Show shirt with Patrons receiving a discount code to get $7 off the shirt all week long. 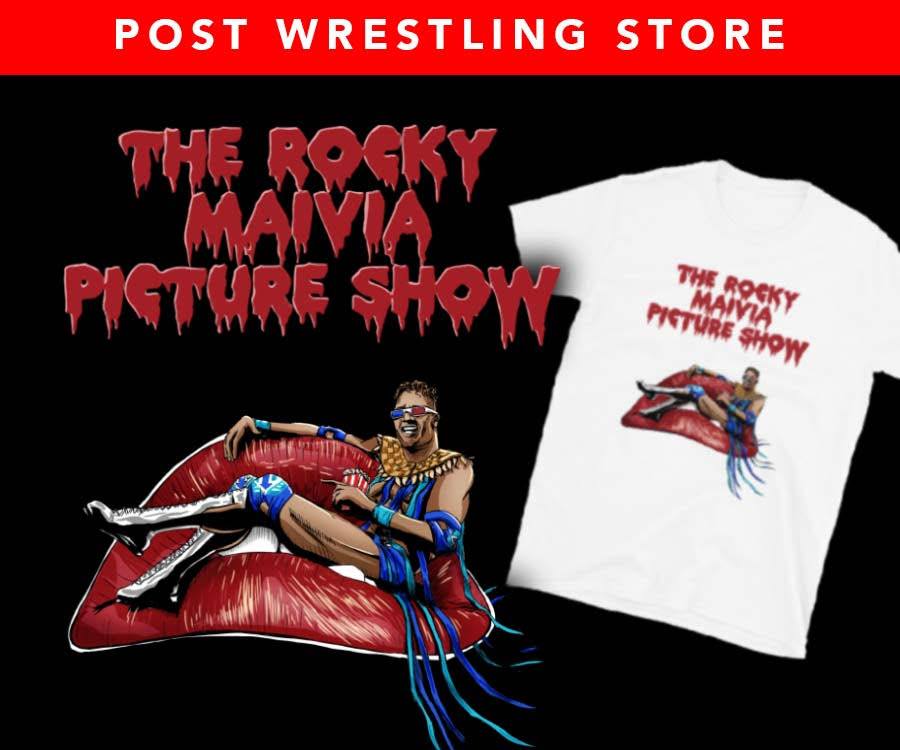 **Fightful Select reported Monday that there will be significant changes to this week’s episode of NXT as some talent have been instructed to quarantine with other talent pulled from the show. No names were listed in the report. Dave Meltzer added that there have been a number of positive tests leading to a quarantine period for those positive and others around them.

**Friday Night SmackDown finished with 2,171,000 viewers and a 0.61 in the 18-49 demographic on Fox this past Friday. They were second among network programs behind ABC’s Shark Tank. SmackDown fell 3.5 percent in viewers, but the 18-49 number was up from last week’s 0.60. The show was promoted around the contract signing between Roman Reigns and Daniel Bryan.

**In Canada, SmackDown averaged 190,700 viewers and 97,600 in the 25-54 demographic on Sportsnet 360 this past week. They had sports competition from the Brier Curling tournament and an NHL game between the Ottawa Senators and Edmonton Oilers.

**Jay White and David Finlay advanced during today’s New Japan Cup card from Korakuen Hall and will meet Thursday in the quarterfinal. White pinned Hiroshi Tanahashi after hitting the Blade Runner while Finlay had an exciting match with YOSHI-HASHI that ended after Finlay countered Karma with the stunner. It sets up the pair, who were part of the same class of young lions and since gone their separate ways within New Japan. The winner of White vs. Finlay will face the winner of Will Ospreay and SANADA on the right side of the bracket. The other quarterfinals feature EVIL vs. Toru Yano, and Shingo Takagi vs. KENTA taking place on Tuesday. White’s story is that he plans to win the tournament and beat Kota Ibushi and separate the Double Championship, which was unified earlier this month.

**AEW Dark: Elevation debuts tonight at 7 pm ET on the company’s YouTube channel featuring Tony Schiavone & Paul Wight on commentary. It’s a big test for the commentary tandem as it requires lots of weekly research and was notable when Excalibur recently spoke of how tough it is calling AEW Dark due to the research and less lead time to prepare than Dynamite. It will be interesting to see if the show remains in this format where there are twelve matches advertised and will definitely run past 8 pm ET and into Raw. Here is the line-up for tonight’s show that was taped at Daily’s Place:
*Riho vs. Maki Itoh
*Jungle Boy vs. Danny Limelight
*The Butcher, The Blade & Private Party vs. Dean Alexander, Carlie Bravo, David Ali & Brick Aldridge
*Tay Conti vs. Ashley Vox
*Max Caster vs. Dante Martin
*QT Marshall vs. Marko Stunt
*Powerhouse Hobbs vs. Brandon Cutler
*Red Velvet vs. Dani Jordyn
*Ray Lyn vs. Abadon
*Diamante vs. Leila Grey
*Big Swole vs. Skyler Moore
*Miro & Kip Sabian vs. Baron Black & Vary Morales
*AEW Rising star feature on Lee Johnson

**AEW will also be releasing a new “Road to” episode at 6 pm ET tonight to preview the St. Patrick’s Day Slam edition of Dynamite.

**Brandon Thurston at Wrestlenomics has a big breakdown of AEW’s revenue from the recent Revolution pay-per-view, which is expected to be its largest yet. Thurston estimates the show did approximately 125,000 buys, surpassing the previous record of 105,000 for last May’s Double or Nothing show. In his breakdown, he has the show listed at 87,500 domestic buys at $50 per buy and AEW taking in 45 percent per buy (which tells you that even as streaming proliferates, it has not yielded a better split for content providers on pay-per-view and was a major reason UFC went the streaming direction in 2019 with ESPN+). On the international front, it’s listed at 37,500 buys at $20 per buy, and AEW having a 40 percent split on the international orders. Through that math, Thurston estimates the show generated $2 million domestically, $300,000 internationally, along with $74,750 in ticket revenue from the 1,150 paid attendance (there were over 1,300 at Daily’s Place total), and $20,700 in venue merchandise. Wrestlenomics lists the estimated gross revenue of the event at $5.3 million with AEW net revenue being $2.4 million of that overall figure.

Long-term, it will be interesting to see AEW’s strategy towards its pay-per-views. Revolution was a big success and this level can’t be expected for all shows, but you can see where the business realities exist of expanding the number of shows beyond four, especially for a growth company. As the UFC has shown, price increases have not impacted big events and while data per show is less public with the heavy streaming component, we do see the volume they are doing for major events. Frankly, with the fanbase of AEW, even a $10 increase domestically would be unlikely to deter too many. That said, I think the long-term viability of AEW’s big shows is not through nominal price increases but getting a giant streaming deal.

The obvious one is a deal with HBO Max that would not be in the ballpark of WWE’s deal with Peacock, but having a guaranteed amount of revenue per show offsets the turbulent nature of pay-per-view, avoiding conflicts, and so many factors that create a schism between how a show performs. For AEW, given they are still new to the market, a fair deal to seek would be one where the streaming platform pays a licensing fee per show that at least ensures profitability per event and then add the incentive where AEW shares in added revenue over a certain figure, therefore incentivizing both sides while allowing AEW to share in any growth of their pay-per-view events over the coming years.

By running four shows per year, AEW has kept its pay-per-view content “premium” and the only wrestling company that can sell its shows at such a high price point on a regular basis. If WWE had ever reverted back to pay-per-view in recent years, they still would have sold but to me, it would have been a difficult process when its audience had been conditioned to value the shows at such a low price, or even free. Your big four events from WWE would likely have been fine but the “B” shows may have struggled greatly.

**Ring of Honor has announced that Matt Taven and Vincent will have an Unsanctioned Match at the 19th Anniversary pay-per-view on Friday, March 26th. The match will be a taped one from PAL Hall in Fall River, Massachusetts, which is where both men’s careers began. Below is the updated line-up for the pay-per-view card:
*ROH World Championship Match: Rush (champion) vs. Jay Lethal
*Grudge Match: Jay Briscoe vs. EC3
*ROH Television Championship Match: Dragon Lee (champion) vs. Tracy Williams
*Unsanctioned Match: Matt Taven vs. Vincent
*ROH Six-Man Championship Match: Shane Taylor, Moses & Kaun (champions) vs. Rey Horus, Bandido & Flamita

**WrestleCon has announced that Christian Cage will be appearing at their convention during WrestleMania weekend next month. The convention will take place April 9-11th at the Westin Tampa Waterside Hotel.

**Maple Leaf Wrestling has a Q&A posted with Ron Hutchison.

**The WWE Network is hosting a variety of content featuring Steve Austin this week. On Tuesday night, “Meeting Stone Cold” will air with other talent sharing their first impressions of Austin, “The Birth of the Stunner” premieres on Friday, “The Best of Stone Cold Steve Austin” airs Saturday featuring his best matches, and Sunday will be the premiere of the latest edition of the Broken Skull Sessions with Austin interviewing Randy Orton.

**Mick Foley recently taped his A&E biography that the network is producing along with WWE. Foley said his biography is expected to air in June. A&E and WWE are also releasing bios on Steve Austin, Randy Savage, Roddy Piper, Booker T., Shawn Michaels, Bret Hart, and Ultimate Warrior and will premiere on Sunday, April 18th.

**Veteran Doug Williams has decided against retiring from pro wrestling and is now accepting bookings. He posted that due to the events over the past year, he wanted to continue doing what he enjoys. The 48-year old last wrestled in early 2020 including a pair of shows for Pro Wrestling NOAH last January prior to the pandemic.

**The NWA has added a number one contender’s match between Thunder Rosa and Kamille for this Sunday’s “Back For The Attack” pay-per-view. This joins the previously announced NWA World’s Heavyweight Title Match between champion Nick Aldis and Aron Stevens, a four-way match with Crimson vs. Jordan Clearwater vs. Jax Dane vs. Slice Boogie. It is the NWA’s first show since last year’s shutdown and will be streaming on FITE TV this Sunday at 4 pm ET.

**New Japan drew 2,142 fans to Hyogo on Sunday for the New Japan Cup show. It is New Japan’s highest attendance since the Anniversary show at Budokan Hall earlier this month. They also drew a healthy figure of 1,591 in Aichi on Saturday, so getting away from the Tokyo market has helped where attendance has dropped noticeably. It also helped to run on the weekend as shows in Ehime and Kyoto last week did well under 1,000.

**Allysin Kay is set to face Masha Slamovich at Josh Barnett’s Bloodsport 6 on Thursday, April 8th as part of The Collective: Remix series of events. Bloodsport airs that night at 8 pm ET on FITE TV and also features Jon Moxley vs. Josh Barnett.

**Mike Mooneyham of The Post and Courier has a lengthy story on the life of Buddy Colt, who recently passed away.

This really stands out to me: they are generating 28% of the live gate in merch sales at an avg of $15.90+ per attendee (using the 1,300 figure not the tickets sold). Assuming a material portion of this crowd are repeated attendees, and friends and family are part of the 1300 figure, that is actually a pretty great up-sell for fans attending shows. I project when this company begins touring again their revenue from live gates + in-venue merch will show exponential growth.

I will have to dig into the WWE earnings + Wrestlenomics data (which is an amazing resource) but curious what the % of merch to ticket revenue is for Live Events. Perhaps live events don’t have to be loss-leaders. (UPDATE: Apparently the avg live event show ran $10-12 per Wrestlenomics).

The Wrestlemania merch sales # will be very interesting to see what kind of pent up demand exists amongst the hardcore WWE fan attending this year. Could be a good indicator of what is in store when they begin touring. I’m sure there is a cost-benefit analysis whether they think there is strong pent up demand.

Unrelated: I wonder where the WWE is on the NFT craze. Personally, I think there is a great opportunity for them there, and if you tie it in to re-imagined live events with personalized experiences in the future, that could be a great area of growth for WWE revenue.