Not the feedback thread

I would say if you wanna get over the destruction and the power exploding don’t have cameramen standing next to it, but good start

Somebody’s auto-correct is gonna get them in trouble. 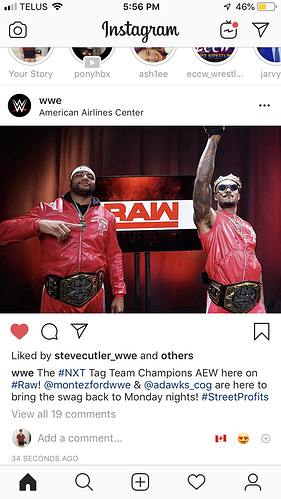 Maybe they are getting a new name

Heyman will get the credit and who knows if that was all him but I’m sure that’s what they want. Him to get praised and positive reviews

That was a high quality big time moment that will be replayed for years and a highlight of Braun’s career. And it was executed phenomenally.

Corey dropping “Holy Shit”.
The announcers going silent
The camera angle
The crowd counting 10 and clearly extremely into it.
Wow
Book that for Summer Slam and it’s something I want to see as a program. It was a floundering 740lb fish up til now and it got a major shock - pun intended.

Just hope they don’t rush to this at Extme Rules

I’ll keep posting as long as this entertains me. I’m on delay but a great second segment with New Day and Viking Machine Experienced Raiders. If forced to cut a match before break, that’s a hot way to do it that makes sense.

In the words of Heath Slater “I got kids”. Watch your mouth Corey lol

A hook to stay with Taker.
A solid choke out for Joe to lend credibility instead of somebody taking a meaningless pin.
And a real Drake Maverick storyline and t shirt.

What happen to Raw?!

What the hell did I just watch there.

Anyone notice both Austin and Cena being in advertisements on USA? That’s actually solid placement #TheLittleThings

Wait, who wrote these AJ and Club and Ricchochete segments? This is like…good

Has there actually been a good wrestling match? I thought the new day match was fun. I’m just so confused as to what is happening.

And now we’re talking about the smackdown championship match? on raw.

What show am I watching. This is good.

I guess I’m just not the target audience. This show was worse than the last few weeks I thought. I’m gonna watch the commercial free version tomorrow to see if I’m sippin crazy juice.

The Braun/Lashley spot was good, and felt authentic.

And the Styles/Ricochet segments were extremely well-written and well done. Loved the heel turn too, now they just need Balor to join up with them too.

Not sure what’s happening with the Street Profits, but they are very entertaining - especially Ford. I can see them doing well on the main roster.

There was some bad stuff - thought all of the women’s segments sucked - but at least they were short. And Becky/Seth are just too cringey together.

But this was the best RAW in a long time.