More talents have been cut from WWE.

The likes of Ember Moon, Franky Monet, Hit Row’s B-FAB, Gran Metalik and Lince Dorado have been released from WWE and more talents have been cut from the company as well.

Keith Lee was being reintroduced on WWE television as ‘Bearcat Lee’. He returned to the ring over the summer after being out of action due to health issues that he explained in longform.

Eva Marie wrapped up her on-screen storyline with Doudrop in September. Her last match for the company was on 9/20.

Former NXT Champion Karrion Kross was brought to Raw while he was still champion. Kross last wrestled at a house show in September.

Mia Yim has not been present on WWE programming since December. She was supposed to be a part of the 2021 women’s Royal Rumble match but opted to take care of Keith Lee during his health scare.

Nia Jax had a match against Shayna Baszler on the 9/20 Raw and post-match, Jax’s arm was stepped on by Baszler and she has not been WWE TV since then.

Harry Smith did not formally make his return to WWE. He was signed but did not debut on TV. He competed in a dark match in July prior to SmackDown.

So many of these releases today suck. Between today and ROH’s roster no longer under deals, another aspiring Tony Khan type could start their own promotion.

That’s exactly what I was telling a friend. More than enough names available.

I think the indies are about to get super hot again.

NJPW will probably sign some specifically to go harder with their US expansion.

I could see Impact loading up their roster and making several plays.

No need for another giant company. Lots of opportunities still exist.

Who would’ve thought that by NXT picking up Samoa Joe’s contract, that it would have this kind of ripple effect.

This is like corporate downsizing in other, more traditional, industries. Soon, they’ll offer minimum wage, and replace half the workers with machines…

I really believe all these releases and lack of care for talent has shifted thinking and WWE isn’t seen as a desirable spot to land anymore.

Why would you bust your ass for years (Taya, Kross, Lee, etc) only to get used and abused by WWE. There’s no job security, creative sucks and you leave much more damaged than you arrived. 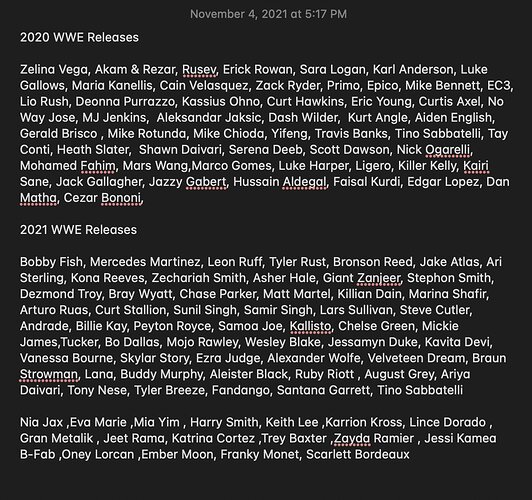 The dream of wrestlers wanting to “Make it” to the WWE, is quickly ending.

The promotion many of the talent in their late 20’s and early 30’s, grew up watching, barely exists anymore.

Out of everyone released this is first time I hope one of them (Nia) is done with wrestling. She’s dangerous and horrible and I hope she isn’t signed with AEW.

I’ve got a sneaking suspicion that there is more coming tomorrow, and if it is, I suspect Ricochet would be on that list.

I hope he gets a chance somewhere else…

Hearing some rumours that some of them may have been fired because of failure to vaccinate. As the WWE starts doing more touring this could become an issue.

I would think that May apply to Keith Lee and Nia Jax, but beyond that I don’t know. Just rumours. Anyone heard this?

Based on his social media activity, Harry Smith seems to be a total anti-vaxxer so you might have something there.

I dont know about that. I agree that WWE isn’t likely look at the same way now as it was 10 years ago, but you still have an entire generation that grew up idolizing John Cena. Same goes for now, I was listening to SNME a little while back and Meltzer was talking about how WWE still scores big with kids. Not 20 year olds, that Cena generation is shifting to AEW, but they still have a ton of kids who watch who in 15 years will be the guys looking to crack into the business. Plus, but then Vince will be long gone so I have to imagine WWE will undergo a major shift in the way they operate.

For the time being for 20 something though, you’re probably right for a lot of them.

The thing that baffles me, is when they release people right after bringing them up. Its one thing if its someone who was given a shot, and in their minds failed (ie. an Ember Moon). But when its someone who they thought enough of to bring up (ie. B-Fab), it just makes zero sense. I truly feels like the right hand doesn’t know what the left hand is doing.

Ricochet needs out so badly. Kyle O’Reilly is done soon. I also don’t see much time for LA Knight or Cameron Grimes. NXT is just scorched earth at this point

Dave confirmed in the newsletter today that at least 5 and possibly more are bc of anti vax.

I assume this explains Nia, Harry and Keith Lee.

Are some of you nuts?! No disrespect and I value everyone here but are you all nuts with this talk of another promotion?!

What billionaire is looking at the available talent and saying, hey I’ll do better than ROH/Sinclair and I’ll compete for major rights when much of this talent flat out couldn’t draw.

NJPW will probably sign some specifically to go harder with their US expansion.

Not nuts. This is the way.

This is like corporate downsizing in other, more traditional, industries. Soon, they’ll offer minimum wage, and replace half the workers with machines…

the IWC should stop rooting for unionized labor before this happens.

On the Anti Vax stuff, so many people I saw grieving releases for people they would openly say deserve it if another industry and reason was AntiVax.

Similarly but very different. What If WWE said they were listening to the audience when they called Nia the worst wrestler of the last few years or declared Karrion Kross dead after his call up. I think these cuts make sense. Stop holding on the “useless” or underutilized talent. The 24/7 division doesn’t need to be 20-30 deep. @kliq Assume a GM for each division. Minor Leagues doesn’t want the talent, main roster will see if it fits, it doesn’t they are cut.

Also assume they are managing to a budget. If they wanna keep expenses Per Smackdown around 3.5M then they can’t carry a bloated roster pushing them into a luxury tax.

Why don’t people have outcry when a practice squad or minor league guy gets cut. Do teams fans get uppity over their 3rd string kicker or AA shortstop get cut on their favorite teams? I would just assume WWE has a salary cap and therefore budge cuts are getting under the luxury tax. Stop thinking WWE has infinite funds. Sports Franchise owners are even more wealthy and don’t pay the 80th guy on the bench and nobody seems to have outcry then. I think the IWC (not here as much) looks absolutely clownish for continuing to be marks for “budget cuts”. All while giving even MORE attention to the company and keeping them top of mind for the wrestling fans. Even if bad, any PR can be good.