AEW Dynamite Review: From Diuluth, Cody Rhodes meets Andrade El Idolo in an Atlanta Street Fight, the TBS tournament continues with Ruby Soho meeting Kris Statlander, a battle between undefeated teams as Darby Allin & Sting face The Gunn Club, Bryan Danielson and CM Punk are both in action, and the main event for Winter is Coming is confirmed.

Double Double+ patrons get live Zoom access to all of our POST Shows after every Raw, Dynamite, SmackDown and WWE/AEW PPV. Join at http://postwrestlingcafe.com

I hated the first half of the MJF/Punk promo. I can’t stand MJF using the cheap heat of sexual insults. It sounds so unintellectual. When the promo got serious after Punk got the mic, it was really great. And just to be clear I’m ok with dog murder as good heat.

I don’t understand how a ‘smart’ crowd like AEW has, could hate the Cody character. I do understand the hate with the ra-ra babyface promos, but after seeing Cody go through a burning table, I just can’t hate the guy. I think back to what this guy was in WWE and what is has done since leaving and I have nothing but respect, plus all the charitable work he does on top of that just makes me such a fan. I know the character is kind of meant to be booed, but I just can’t.

Also @beans, I would love a picture of John throwing his napkin full of chips into the garbage at his school party. I apologize if I start requesting every John Pollock story as an illustration.

You’ve never had chips OR crackers in your life John?!

My mind is blown that you’ve somehow never eaten either of these snacks in 37 years … But I believe you’ve said you’ve never had cereal before, as well as I believe, never watched The Simpsons, so who knows.

But I guess the fact that John can easily tell me whatever day of the week February 4, 1986 was without Google or a calendar is his reward in life, for missing out on these trivial things.

John has definitely declared his distaste for potato chips previously, but I don’t recall him ever saying that he has NEVER had a potato chip.
It’s certainly good that John has never had a Dorito because those are gross and, as we all know, they contain palm oil, the harvesting of which kills orangutans. Wai is also correct in saying salt & vinnegar chips are gross.

This forum is a little too salty sometimes with all the salt and vinegar hate.

What can I say? We’re full of piss and vinegar.

Burritoy Boyz is great, though.

@wai0937 Screen-X is a premium experience, where there are two additional screens on the walls, so the film is projected in a way so the action appears like it is surrounding you. I have no desire to ever see a film in that format and I managed to grab a (non-3D) AVX ticket for Spider-Man: No Way Home this morning.

Someone sent me this and now I’m a little excited, actually: 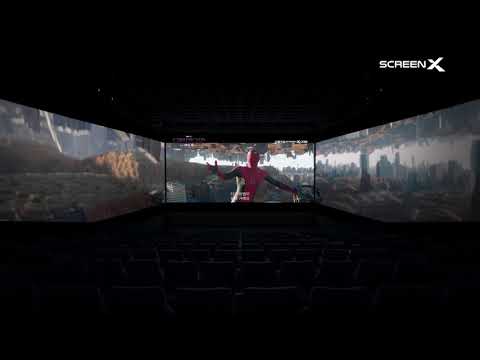 Wow, that looks cool watching the video. I wonder if it might get annoying having to keep turning your head to catch something though.