John Pollock and Wai Ting review WWF The Big Event from 1986 headlined by Hulk Hogan vs. Paul Orndorff for the WWF Heavyweight Championship in front of a record-setting crowd of 64,100 at the CNE Stadium in Toronto, Ontario.

Dan “The Mouth” Lovranski joins us to discuss attending this event, the local media coverage surrounding it, and th3 controversy of its oversold seating.

This edition of the Rewind-A-Wai is presented by Espresso Executive Producer, Cesar Silveira.

Excellent research John. I would love to hear more Toronto centric reviews in the future if possible.

My library card has unlocked a new world to discover!

Not wrestling related but I recently discovered this Toronto event - 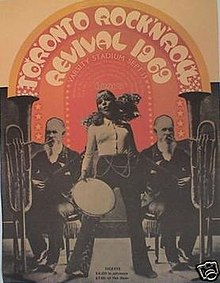 The Toronto Rock and Roll Revival was a one-day, twelve-hour music festival held in Toronto, Ontario, Canada on September 13, 1969. It featured a number of popular musical acts from the 1950s and 1960s. The festival is particularly notable as featuring an appearance by John Lennon and Yoko Ono, as the Plastic Ono Band, which resulted in the release of their Live Peace in Toronto 1969 album. The festival was also the subject of the D.A. Pennebaker film, Sweet Toronto. The Toronto Rock and Roll ...

It pretty much made Alice Cooper famous as it was rumored he bit the head off a chicken at this show, which of course he didn’t, his management was just smart enough to never deny it

Always great to hear Dr mouth on any show. Great show as always guys even tho Wai probably got better rest during that show than I’ve had in a week lol.

In the opening 10 minutes we get discussion on the concept of religion as a coping mechanism, the shelf life of expired foods, life in the womb, medical histories and early childhood memories.

Already one of my favourite shows.