I want to get y’alls takes on something for those who are theme park aficionados. Who develops the better theme parks? Universal or Walt Disney?
I believe a large component of why people continue to vacation at Disney, is because they see it as a more complete package as a resort destination. Whereas people right now are likely to spend a week on Disney property, going to all of the parks but also exploring the numerous other options like dining, boating, fishing and maybe even a water park or two, they likely don’t perceive Universal as having an equivalent value because it’s so much smaller. However, as Universal has continued to build more hotels, has introduced Volcano Bay and is now opening Epic Universe, I believe perceptions will begin to really change. Whereas before, Universal was seen as a one or two day side trip from a Disney stay, that may no longer be the case. With the third park, there’s a strong chance that Universal parks will contain more attractions than Disney has in four.

To be honest with you as a lifelong Disney lover, I hope Universal takes over and becomes the Industry leader. Disney needs to be knocked down a peg and put in their place. They need to remember what made their parks successful- quality and innovative attractions, incredible and immersive theming, and accessibility. Disney right now has done nothing but pump out cheap and low quality rethemes and cloned attractions, and increase prices to try to limit the classes of people that can visit their parks. Premium resorts in Universal are more affordable and come with better benefit (unlimited express pass), the transportation through the property is much more efficient, and it isn’t overrun by children. Their innovation are superior right now. Obviously, Disney is great for young families. But Universal hits different. 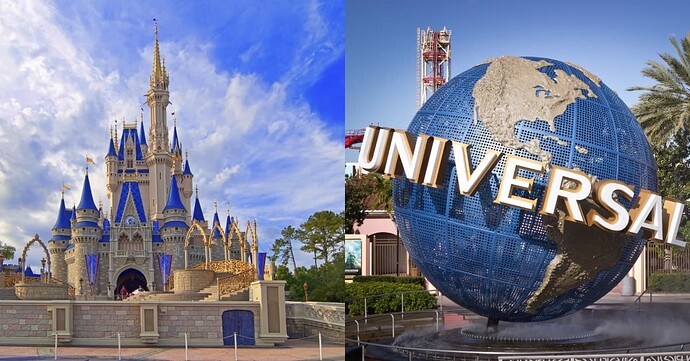 We’re a Disney World house but it really depends what rides and attractions interest you the most. I really feel the two parks are on the same level, so it’s just personal tastes at this point.

I think it depends on the age of the people you were going with.

I think for slightly younger kids Disney is better. If the kids are a bit older they may like universal and I know for adults universal is probably better.

I enjoyed Disney World but Universal was amazing. The Wizarding World of Harry Potter at Universal was incredible. I’ve never had the same experience of feeling like I walked onto a movie-set or into a book anywhere else in my life. And the rides, interactivity, and attention to detail was outstanding.

I do want to go back to Disney World to experience Star Wars Galaxy Edge and Avengers Campus. But my impression is that while these areas seem really cool they don’t replicate the movie experience as well as Universal did with Harry Potter.