Assuming this is actually the Undertaker’s retirement I thought it may be time to discuss his greatest moments.

What you all saying?

I’m gonna set the bar low with my all time fave which was Undertaker Vs. Yokozuna in a Casket Match at Royal Rumble 94. I think I watched this VHS 100 times from the age of 11-15. If I ever get the Network it would be the first PPV I would watch, probably won’t have aged well but it has good memories for me

Taker vs Yoko at Rumble 94 is a lot of fun, and I always enjoyed the Taker / Yoko combination.

For me, I’d say most of his 97 stuff was great. The first time he really seemed like he was showing what he could do with capable opponents.

Obviously his Foley stuff was all memorable. From the angle after Mania 12, all the way through their Hell in a Cell, over two years later.

A personal favorite moment of something I was there live for was Mania 18. Not really the match with Ric, but the surprise spinebuster from Arm to Taker was an insane moment.

Oh, also loved his original HITC match with Brock in 2003. Still one of the best cell matches.

I think I’ll most remember him saying “Where to Stephanie?” in the limo or saying “Not yours” and dragging the casket when Jake Roberts slammed it on his hand.

My favourite Taker match is when he took on Angle at No Way Out 2006 - just an absolute forgotten classic. I’d also put up his RAW match against Jeff Hardy in 2002.

But he also had a huge hand in building guys like Brock and Batista.

He’s just had so many, and this is going to be the obvious answer, but the four mania matches for me were just some of the best storytelling in wrestling history.

The first Hunter match was good, but the two vs a Shawn and the hell in the cell were simply amazing!

I’d also put up his RAW match against Jeff Hardy in 2002.

Is this the ladder match? I loved that one. I don’t have the best memory when it comes to that era of WWE, but it might be my favorite thing that the “Biker Taker” ever did.

Yep that’s the one. They really made you believe Jeff had a chance to win the title. Awesome job by JR in the match also

This is going to sound like the WWE PR department, but I think Taker is the closest that everybody my age and younger will ever get to seeing Andre. The REAL Andre (before his health started getting really bad) that sold tickets because people just wanted to see him in person for themselves.

Taker is a seven-time champ in an era where other guys have literally twice that many, even though Taker is bigger star than nearly all of them. He was a main eventer without being in the main event. I loved the Cena U.S. Title run, but it always felt like such a forced “Cena is stepping away from the World Title picture” thing (maybe just because we’re all obnoxious smarks). Taker had real feuds and real runs where you hardly noticed that there was no belt involved.

Definitely a great match. Honestly, wish it was a PPV match that might stand out a little more than a random RAW main event.

I’ve not seen any of this, I was out of the scene for 1997 onwards. I may get the Network for xmas and catch up on these

Yeah I agree that him winning less titles is definitely a positive. Whats Roman already - a 4 time champ? maybe more.

Less is most definitely more when it comes to wrestling. Lower card rivalries have really struggled in recent years. It seems Seth vs Mysterio has been good but due to the sheer amount of telly that story has been rushed where as the similar story of the Hart Family in the 90’s took over a year because there wasn’t 5 hours of telly each week.

I mean, not to go on a side tangent, but WWF 1997 is perhaps their best year ever in terms of creativity and trying new things. It’s a year where they were firmly #2, and everybody in the company is working their asses off to get back to where they used to be.

The entire year is the foundation of the “Attitude Era”. Basically from Survivor Series 1996 to Mania 14. It’s all about the company getting out of their comfort zone and doing different things.

On top you have Bret, Shawn, and Taker as the main event players. You have Austin, Hunter, Foley and Rock on the undercard all starting to simmer and bubble up. Then you’ve got guys like Vader, Goldust, Owen, Bulldog, Shamrock, Scorpio, among others filling out the card.

From The Hart Foundation run , to the birth of DX, to Taker’s firmly establishing main event run, to classics between Bret and Austin, first Hell in a Cell, the ECW invasion episode of RAW, and so much more. Definitely an era to watch.

Even the format of their current TV is basically created here. When Monday Night Raw becomes RAW is WAR.

So yes… definitely watch that era.

Some of this might be revisionist history, but I think Taker is right in saying that while the “Dead Man” is the much more iconic/beloved persona, that character wasn’t going to work in the more realistic (by WWE standards) tone of the main event scene that time period.

I don’t know. I think 97 era Taker would have been fine. He was basically just a giant goth dude at that point. I think the fully gone Satanic / Ministry Taker was over the top… But 96 Survivor Series through 97, Taker was just basically a jacked up Marilyn Manson, and really wasn’t doing silly supernatural gaga.

Edit… And yes, this culminated in the Kane storyline - but Taker was just a big creepy guy and it was the storyline around him was absurd.

One moment that stands out to me was the attempted wedding/sacrifice of Stephanie McMahon in 1999 as an early part of the Corporate Ministry storyline when Austin saved her. 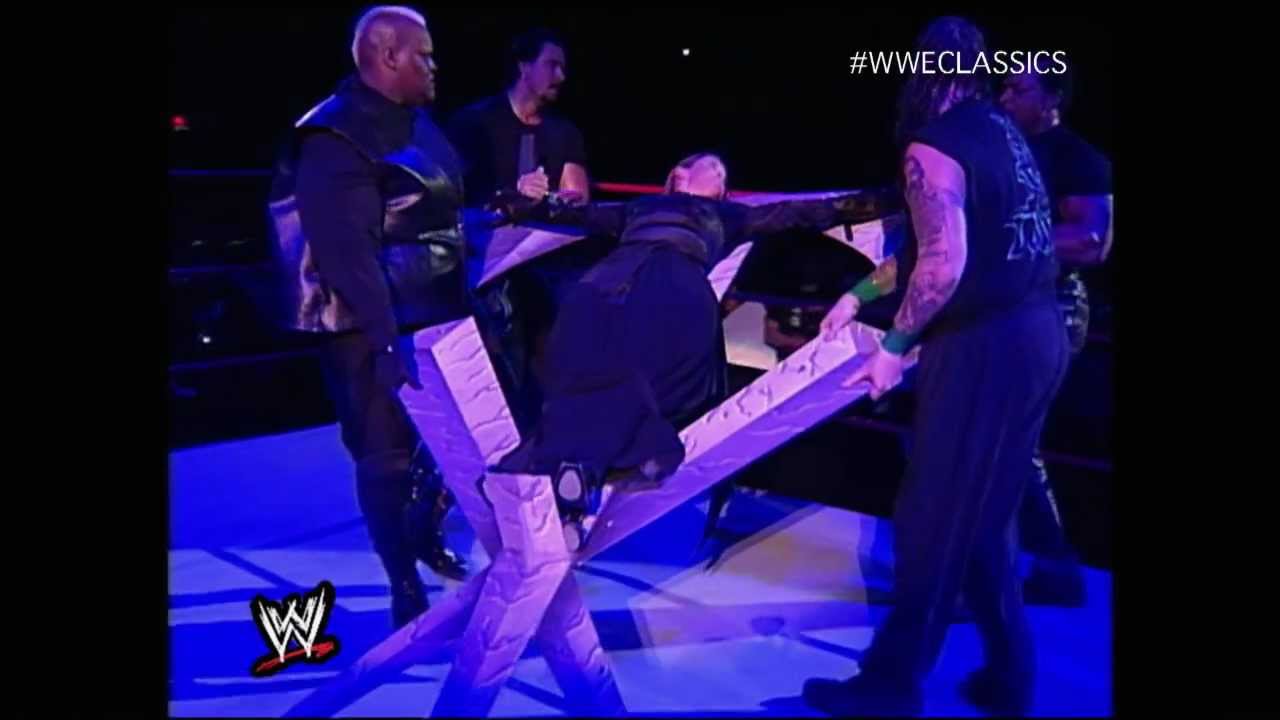 The entire segment is totally insane in hindsight. But at the time I remember this being a massive moment and I was jumping for joy around my room as an young teenager when Austin saved her.

Despite watching it in an incredibly edited / censored version up here on TSN at the time - I was really digging the Ministry stuff.

The moment the Higher Power was revealed to be Vince, it really killed any interest for me. Taker’s character was really bad / flip floppy during the Corporate Ministry era, basically right until her took time off before Biker Taker.

Yeah from what I remember I enjoyed the Ministry stuff. It was different and was a good way to turn someone who everyone loved into a heel.

The start of the ministry was everything Wyatt as a cult leader should have been. The reveal with Vince as the higher power was such a flop though, and undermined months of story telling. It never recovered.

I still remember that return at I believe the May PPV when he attacked DX during the Rock/HHH match, the entire place went insane! It sucks we don’t get that level of organic reaction anymore.