What Wrestlers Have You Met?

I thought we could start a thread about meeting wrestlers and our interactions with them. Here’s my list:

Big Show - I met him in the fall of 1999 around the time he was feuding with Big Bossman. I was only 9 at the time, and he was very cool. My aunt asked him if his Dad was really dead, and he confirmed he had died years before.

Kane - Met him in 2001. He had a long line and signed for everyone. I didn’t have a ton of interaction, but he was nice and shook everyone’s hand.

Raven - Met him in 2003 at an indy show. He seemed scummy and standoffish. He signed my 8x10 and handed it back without saying a word.

Victoria, Hurricane, and Matt Hardy - Met them at a motorcycle dealership in 2004. All 3 were class acts.

King Kong Bundy and Bobby Heenan - Met them at a sports collectible show in 2007. King Kong Bundy was really nice. Bobby Heenan seemed cranky at the time (I made a joke about Tony Schiavone and he no sold it), but given his condition he had a right to be.

Lita - Met her at a Comic Con in the early 2010s. She was kind of like Raven. She wasn’t overly friendly, didn’t say a word, and just signed what I had.

Davey Boy Smith Jr. Awesome and fun guy. I met him shortly after his release from WWE.

Vader - I met him at an indy show in 2015. He got a little frustrated when it took forever to get my camera on my phone to work for picture with him, and screamed “Come on!” at my friend who was taking the photo.

Scarlett Bourdeaux and Nixon Newell - I met them at a Shimmer show in 2016. Both were friendly, but they had long lines so not much interaction.

Marty Jannetty - I met him at a low-rent indy where he was signing autographs in a VFW mop closet. I thought his autograph was included in the ticket price and essentially got his autograph for free, since I didn’t have any cash on me. He seemed like a cool enough guy and told me that his favorite person to wrestle was Shawn Michaels.

Mick Foley - Cool guy. We both joked about Hulk Hogan since a guy in line was dressed like him. This was around the time of the Hulk Hogan sex tape scandal being released, but before the racial slurs part of the tape was released.

Tony Schiavone - I met him at Starrcast 1. He seemed really nice and genuine. He had a long line, but took the time to look everyone in the eye, shake their hand, and have a little bit of conversation.

Scott Steiner - I also met him at Starrcast 1. He was not overly friendly, but what do you expect from the Big Bad Booty Daddy? I was surprised at how short he was.

Brutus Beefcake - Another meet at Starrcast 1. He signed my copy of his autobiography that I had already brought on Amazon. He asked me if I had bought the book at his table so he seemed to be a little suspicious that I might be stealing it. He was nice otherwise, but seemed to be sweating and breathing heavy. I hope he is healthy.

Sean Mooney and Jim Johnston - Met them both at Starrcast 1 and both were really down-to-earth. I asked Jim Johnston who sung Shawn Michael’s song on WWF The Music Volume 2, and he answered Shawn Michaels. It sure doesn’t sound like Shawn, so maybe he forgot. I also told him that the Sid theme was low key underrated.

Owen Hart, Harvey Wippleman & Kwang - At Maple Leaf Gardens the guys used to walk right in the front door and were totally in their gimmicks. Harvey & Kwang said hi to me. Owen asked me where Razor Ramon was.

New Age Outlaws - Met them at a Walmart. All I remember was Billy Gunn having massive hands when I shook his hand.

Chris Benoit & John Cena - Met them before a houseshow. Benoit was quiet, just signed and smiled. Cena talked to me. This was when he was with B2 and he had a website or something and answered a question of mine on it. He was super cool.

John Cena, Spike Dudley, Kane, Lance Storm, Stacy Keibler, Rene Dupree - Met them all in the parking lot outside of the arena of a house show. The guy who took my pic with Kane, cut half his head off.

Teddy Long & Chad Patton - Both came out during intermission of a house show and got to talk with them and take a pic.

Zach Gowan, Chris Benoit, John Cena, Matt Hardy, Kurt Angle, Shelton Benjamin & Charlie Haas - There was a huge event at a racetrack that also included Rey Mysterio, Torrie Wilson & Sable. Everyone was paired off for autographs and I unfortunately got the Gowan & Benoit line. They werent too personable. An employee tipped me off that they’d all be at the winners circle later on, so I went there and was right at the front. John Cena did a freestyle for me, my dad and brother and it was awesome. Matt Hardy greeted us. Shelton Benjamins horse won the race and him and Haas came over and were celebrating with me. Shelton then later stumbled out of the bus. Kurt Angle signed an autograph, wasnt too friendly.

John Cone & Chad Patton - Saw them at a gas station. They were cool guys. John Cone used the bathroom. I also had to go. He didnt flush the toilet.

Miz, Maryse, Nattie & Cesaro - Got pics with them all before a houseshow. My dad was not a Miz fan before this. He gained respect for Miz after this, because he was such a great guy. Him & Maryse were both amazing.

John Cone & Chad Patton - Saw them at a gas station. They were cool guys. John Cone used the bathroom. I also had to go. He didnt flush the toilet.

Thank you for that detail

Maybe it was a no DQ match.

Miz, Maryse, Nattie & Cesaro - Got pics with them all before a houseshow. My dad was not a Miz fan before this. He gained respect for Miz after this, because he was such a great guy. Him & Maryse were both amazing.

Miz is indeed a great guy in real life.

Lance Storm - at an indie show, kinda short tempered when he couldn’t find his Sharpe.

Jonathan Coachman - he was doing fan commentary at mania X8 access and I slipped him the mania X8 commemorative book and he seemed a little annoyed when signing.

Rhyno - singing at an indie show years ago, seemed alright but the line was very short. 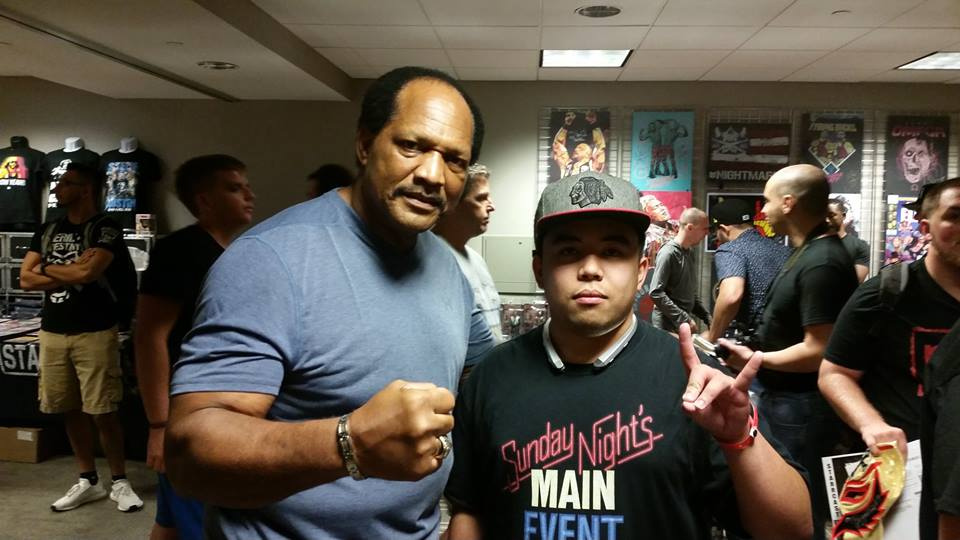 I’m likely going and went to the first one. Unless you plan on going to the panels, I recommend just getting a day pass and hanging out in the collector’s corner for a few hours. You can still see wrestlers up close without buying autographs and some will walk within a few feet of you. There is Woodfield Mall nearby that your wife can spend a few hours at if she has no interest in going.

Jeff Hardy at one of his recent concerts. It was actually a pretty good deal. $15 ticket which included a photo and an autograph on an item of your choice. He also sold shirts for $20 a pop. When he autographs the shirts he signs like this giant picture drawing which is pretty sweet.

At the concert were also Bayley, Mickie James, and Drew Gulak but I didn’t approach them as I figured they probably just wanted to enjoy a night with their friends. Jeff’s wife was there and apparently her and Mickie are like besties. Also Mickie still looks damn good in person, I only hope I age half as well as she has. 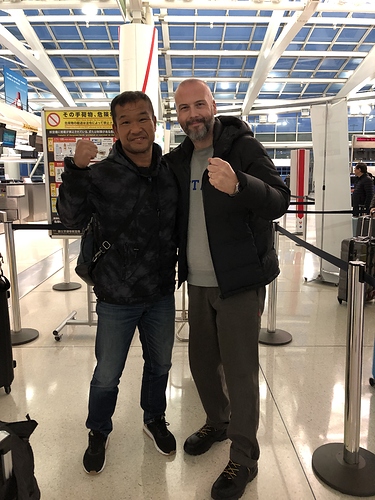 Bumped into Masato Tanaka at JFK as we both travelled back to Japan.