Always one of my favorite topics is trying to put 4 heads on a Pro Wrestling Mt. Rushmore.

What ya got POSTMarks?

Here is my badly photoshopped Mt Rushmore of Pro Wrestling:

1.) Vince McMahon
2.) Steve Austin
3.) Bruno Sammartino
4.) The man who bodyslammed Andre the Giant in front of 235,000 StevieManiacs at the Pontaic Silverdome Brother! 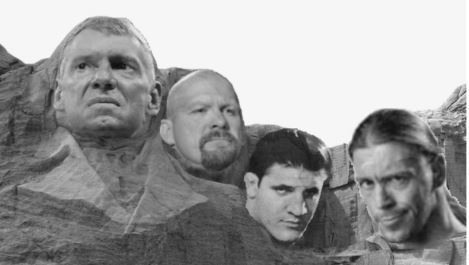 Still working on mine, but here’s Stephanie’s … 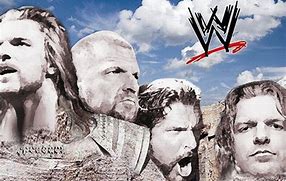 Flair, Hart, Jericho, Benoit. Whoops, can’t use him
… let’s go with the Rock then.

I would have to say Hulk Hogan, John Cena, Steve Austin and Ric Flair.

JT, just to clarify, is this more ‘our 4 favorite wrestlers’ or ‘4 wrestlers we think deserve to represent wrestling’? It seems like your answer might be the former, but most of the P.marks are answering the latter,

For me its open to interpretation, but it’s more along the lines of “The 4 most important wrestling personalities”. I could have easily put The Rock or Ric Flair on mine, but I feel Vince is the most important Wrestling personality because of what he has done, and also being the foil for Stone Cold. There is obviously no right answer, it’s just a fun topic for me.

And obviously Stevie Richards is a inside joke because it’s clearly Hulk Hogan who he “replaced” on my Mt Rushmore, lol

This is just WWF/E wrestlers for me that were responsible for business booms and names that even the most outside non wrestling fan would recognize. (Vince is a given, im just putting up wrestlers) (Bruno I respect the amount of people he reached given the limited technology in his time. I just didnt witness it myself)

JT, thanks for the clarification! If it’s ‘my favorites’, Richards would be way ahead of Hogan

This one may require me to attempt another shitty Photoshop